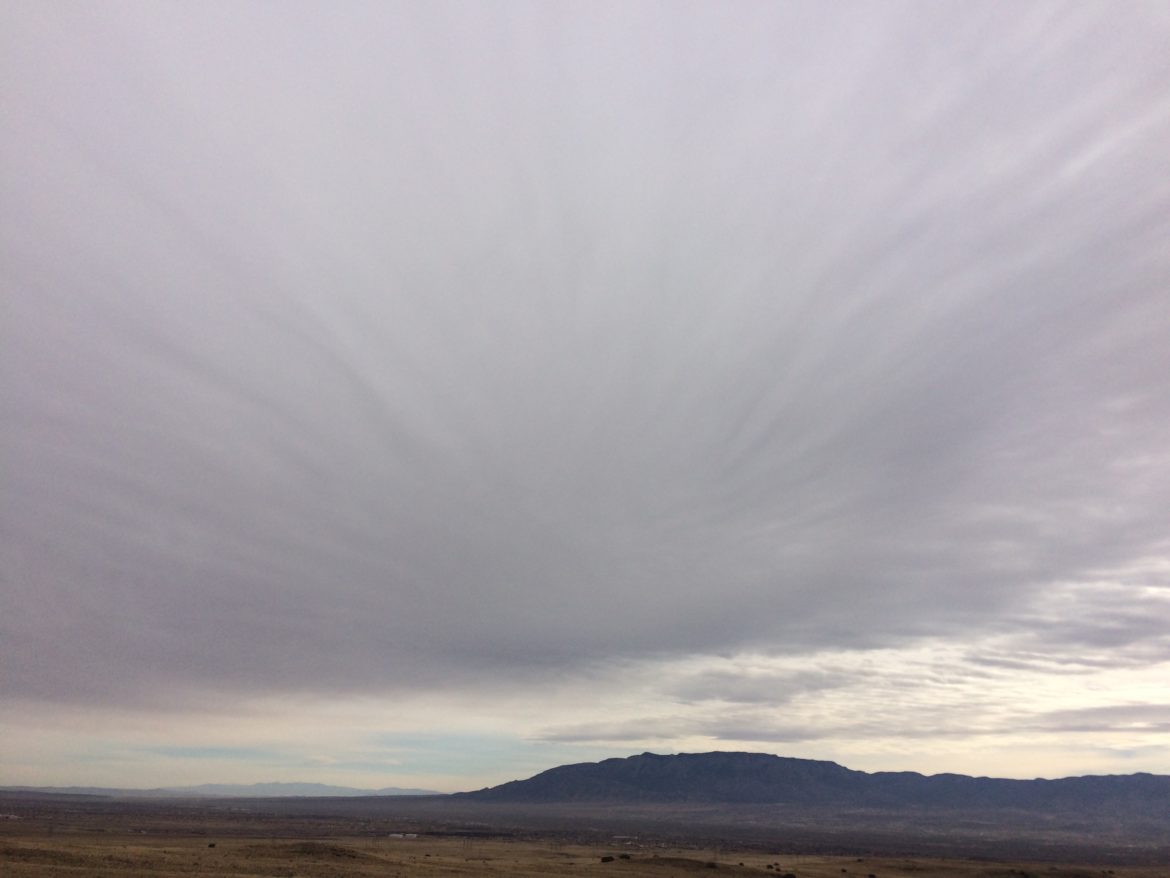 Clouds and rain came to the Rio Grande Valley this week, finally.

This week, the budget news out of Washington, D.C. has plenty of people worried, including teachers and students who rely on science education funding. But the U.S. Department of Energy appears to be sitting pretty, especially when it comes to nuclear weapons. Rebecca Moss of the Santa Fe New Mexican has that story, with more on a $1.1 billion increase for the National Nuclear Security Administration. Fossil fuel development would also see an $81 million bump over 2017 levels. According to her story:

But prioritizing weapons and fossil fuels would come at the expense of funding for renewable energy and energy efficiency programs, which would take a $1.3 billion hit under the president’s budget from fiscal year 2017 levels.

Funds to clean up widespread pollution and contamination from nuclear waste would see a small uptick but remain relatively low, if not entirely stagnant, at many sites.

The Carlsbad Current Argus has a story about the state’s hundreds of abandoned oil and gas wells. From the story:

EMNRD Cabinet Secretary Ken McQueen said many of the 600 abandoned wells Dunn listed were compliant as land owners are allotted up to 10 non-producing wells based on the total amount they own.

He said non-producing wells are typically found in areas with high levels of extraction activity such as Eddy and Lea counties in the southeast and San Juan County in the northwest.

“Just because a well is non-producing doesn’t make it non-compliant,” McQueen said. “Operators are allowed to have a number of non-producing wells.”
When a well stops producing for 15 months, McQueen said the OCD sends a notice and follows up with the owner.

He said some smaller wells are deemed unviable during dips in oil prices, and can be allowed a period of “temporary abandonment.”

In a move surprising to exactly no one, U.S. Department of the Interior Secretary Ryan Zinke took yet another tack to overturn an Obama-era rule focused on cutting methane waste from the oil and gas industry. According to the New York Times article about Zinke’s plans:

The Interior Department’s Bureau of Land Management described the rule as costly, redundant and overly burdensome.

“In order to achieve energy dominance through responsible energy production, we need smart regulations, not punitive regulations,” Joe Balash, the department’s assistant secretary for land and minerals management, said Monday in a statement.

Meanwhile, New Mexico is sending even more money to the Carlsbad brine well. The legislature passed a spending bill that will divert money from taxes on car sales to pay for the well’s remediation. That well is collapsing, by the way, because of drilling activity in the area–and the company responsible declared bankruptcy. The company that owned that site, I&W Inc. was a donor to the campaign of Gov. Susana Martinez, who is expected to sign the bill. Andrew Oxford reports the bipartisan bill will raise up to $30 million over the next four years.

Speaking of roads, the Denver Post wrote about how President Donald Trump’s infrastructure plan may affect the state. The lessons presumably hold true for New Mexico, too. According to the story, “The early details suggest the plan includes $200 billion in federal spending over 10 years and puts state and local governments on the hook for 80 percent of highway projects — a reversal of the current ratio.”

Gov. Susana Martinez met with Trump at the White House to talk about his infrastructure initiative. And scored a prime seat–in between the president and EPA Administrator Scott Pruitt.

.@Gov_Martinez thanks @POTUS for involving state and local governments in the formation of this very important infrastructure plan. pic.twitter.com/QuqDUf571k

Pruitt, the former Oklahoma Attorney General with close ties to the oil and gas industry, was in the news again this week. Under fire for his expensive first class and military jet flights—he and his staffers spent $90,000 of taxpayer money just on some trips last June—Pruitt told a reporter with the New Hampshire Union Leader he needed to be protected from the public:

“We live in a very toxic environment politically, particularly around issues of the environment,” said Pruitt, who confirmed he flew first class from the Washington area to Boston to reach New Hampshire.

“We’ve reached the point where there’s not much civility in the marketplace and it’s created, you know, it’s created some issues and the (security) detail, the level of protection is determined by the level of threat.”

Pruitt already requested an around-the-clock security detail and spent $25,000 of the agency’s money on a new soundproof “privacy booth” for his office.

If all that reading isn’t enough to keep you busy this week, I have three more suggestions:

In the New York Times Magazine, Michelle Nijhuis writes about the Valve Turners, five activists who decided to fight climate change by doing “whatever it takes,” including sabotaging pipelines.

The Valve Turners are, for the most part, quiet people. They were sensible shoes, and several attend church regularly. Most are parents, and one is a grandparent. All are white, all are educated and none are truly poor. While all are deeply concerned about climate change, none area immediately threatened by its worst effects: no one’s home has flooded, and no one’s health has been seriously damaged by heat waves or failed harvests or northward-creeping tropical diseases. All say that it is this relative safety–and the relative advantages of age, race, education and wealth–that makes them feel they have a particular responsibility, as climate activists, to push the boundaries of civil disobedience.

In High Country News, Graham Lee Brewer has a piece, “When the victors re-write history” about New Mexico’s Genízaros. HCN also published an essay from The Last Word on Nothing recently. From Sarah Gilman comes advice on learning to love a new landscape. We’re a little late for Valentine’s Day, but it’s a lovely essay to read anyway.