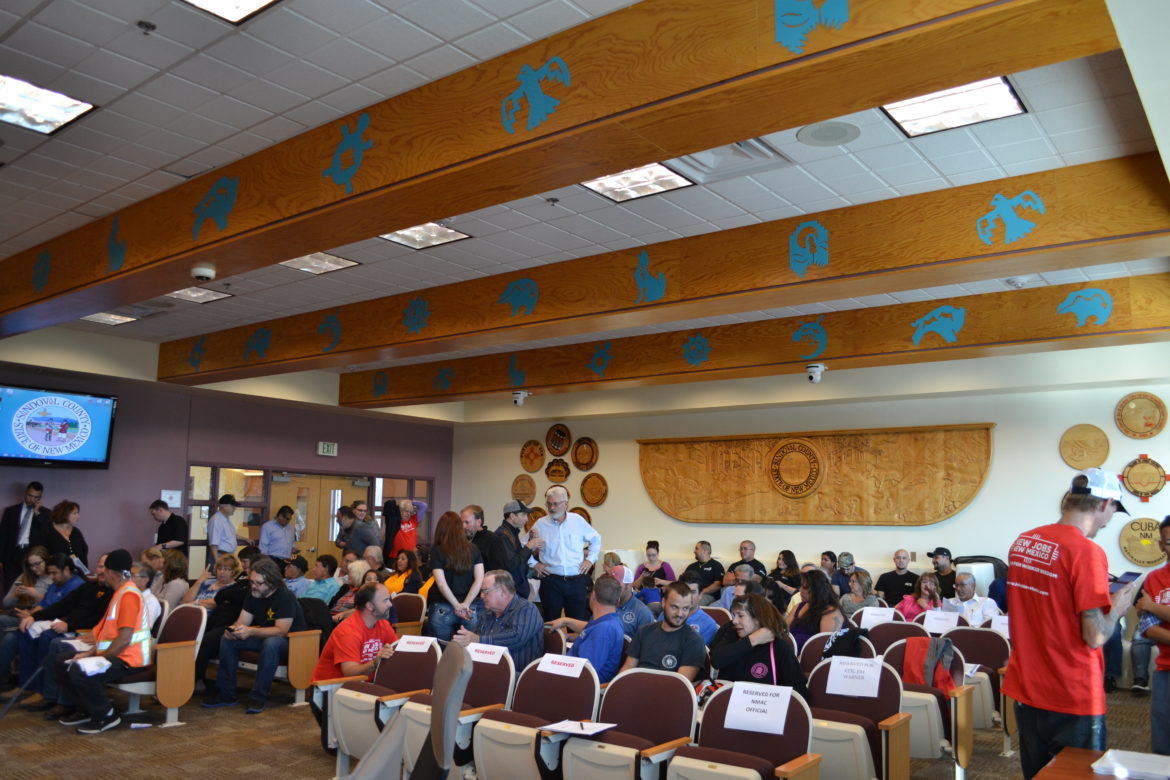 A large turnout for a Sandoval County Commission hearing about right-to-work legislation.

As the issue of compulsory union dues and fees for public employees is pending at the U.S. Supreme Court, one New Mexico activist group is jumping from county to county, pushing local lawmakers to ban unions from requiring money to represent private sector workers.

The libertarian non-profit Americans for Prosperity announced its reentry into New Mexico politics about a year ago. Funded by David and Charles Koch, Americans for Prosperity is a 501(c)(4), which means most of the group’s work has to focus on advocacy or education, rather than support or opposition of specific political candidates. Other groups with the same tax category include the American Civil Liberties Union, AARP and the National Rifle Association. In New Mexico supporters of right-to-work laws haven’t been able to pass a statewide right-to-work law for decades. But even with a pending lawsuit against a county government for passing such an ordinance, the non-profit has been busy with its rapid fire attempt to pass right-to-work legislation, county by county.  Or, as the late U.S. Army Gen. Creighton Abrams reportedly suggested one eats an elephant—one bite at a time.

In January, Sandoval County successfully passed a right-to-work ordinance after long, contentious public debates. Now workers there are not required to pay union dues or fees, although union representatives often serve as facilitators or negotiators between employees and employers. In response, the International Brotherhood of Electrical Workers, AFL-CIO, Local 611 and the United Food and Commercial Workers, AFL-CIO, Local 1564 sued the county commission. Instead of waiting for a judge to decide whether county commissioners had the right to pass the ordinance, the effort moved to a politically right-leaning county with a population of about 65,000 people.

While New Mexico Attorney General Hector Balderas and labor attorneys say state law doesn’t give counties the authority to pass measures like the right-to-work ordinance, Americans for Prosperity State Director Burly Cain thinks a federal judge will rule in favor of Sandoval County. Regardless, he’s not waiting around to see what happens. Instead, Cain is hitting the road. After their success in Otero County, they’ve convinced county commissioners in Chaves, Lincoln and McKinley counties to introduce right-to-work proposals.

The debate over right-to-work laws go back decades in New Mexico. In the early 1980s the state Legislature twice sent right-to-work legislation to then-Governor Bruce King. King vetoed both attempts. The issue was mostly dormant until 2015, when Republicans took control of the state House of Representatives. Numerous legislative hearings were held that year with hours of public comment, and the effort passed the House. But attempts to pass legislation barring mandatory payments to labor unions as a condition of employment were thwarted by the Democratic majority in the state Senate.

Now, right-to-work proponents are well into plan B: a piecemeal strategy, partially borrowed from Americans for Prosperity in Kentucky, where a federal appeals court ruled that counties in that state could pass right-to-work laws. But whether Kentucky counties could pass such laws became a non-issue when the state enacted a right-to-work law last year.

More than half of the states in the U.S. have right-to-work laws.

In New Mexico statewide debates routinely get bogged down in competing statistics from each side. Generally speaking, labor unions and Democrats face off against Republicans and libertarians, who argue compulsory payments to unions violate individuals’ rights.

Cain said Americans for Prosperity plans to approach every county in the state, even those unlikely to pass a right-to-work measure.

“I think there’s a possibility to pass it in Bernalillo and Dona Ana [counties], all of them,” Cain said.

The group’s presentations are public and announced in published meeting agendas. Yet, occasionally, no one shows up at the rural county commission meetings to counter the group’s efforts.

“I think we have taken [the unions] by surprise,” Cain said. “[Union officials] didn’t attend the Lincoln County meeting.”

Still, Cain declined to say which counties are on next on his list, citing alleged intimidation from union members and bosses when they’re not taken by surprise.

“In some places they’re [at meetings] and they are sending out threatening letters to county commissioners,” Cain said.

Union lawyer Shane Youtz said he’s the one sending those letters, and that they aren’t threatening.

Youtz said he’s putting county officials on notice, letting them know he is prepared to file a lawsuit similar to the one in Sandoval County.

“The litigation over the legitimacy of the Ordinance will be costly and likely embarrassing for the County, marking it out as not a place for serious business consideration,” Youtz wrote to the McKinley County Commission.

If Cain and his organization’s plan is to rapidly pass right-to-work legislation while labor unions are tied up in court over Sandoval County, Youtz seems unfazed.

“The strategy isn’t disconcerting to me,” Youtz said. “I think it’s reckless, it’s not really a thoughtful strategy.”

Reckless or not, lawsuits themselves will not stop the ordinances from going into effect. Legally speaking, Sandoval and Otero counties have right-to-work ordinances on the books. In the coming weeks, Lincoln, McKinley and Chaves county commissioners will decide whether to follow suit. But Youtz cites a shortcoming of at least the Sandoval County ordinance and possibly other counties as well—there are no union shops in unincorporated areas of the county. According to Youtz, businesses that employ union workers are all based in municipalities like Cuba or Rio Rancho. Those municipalities don’t have right-to-work ordinances.