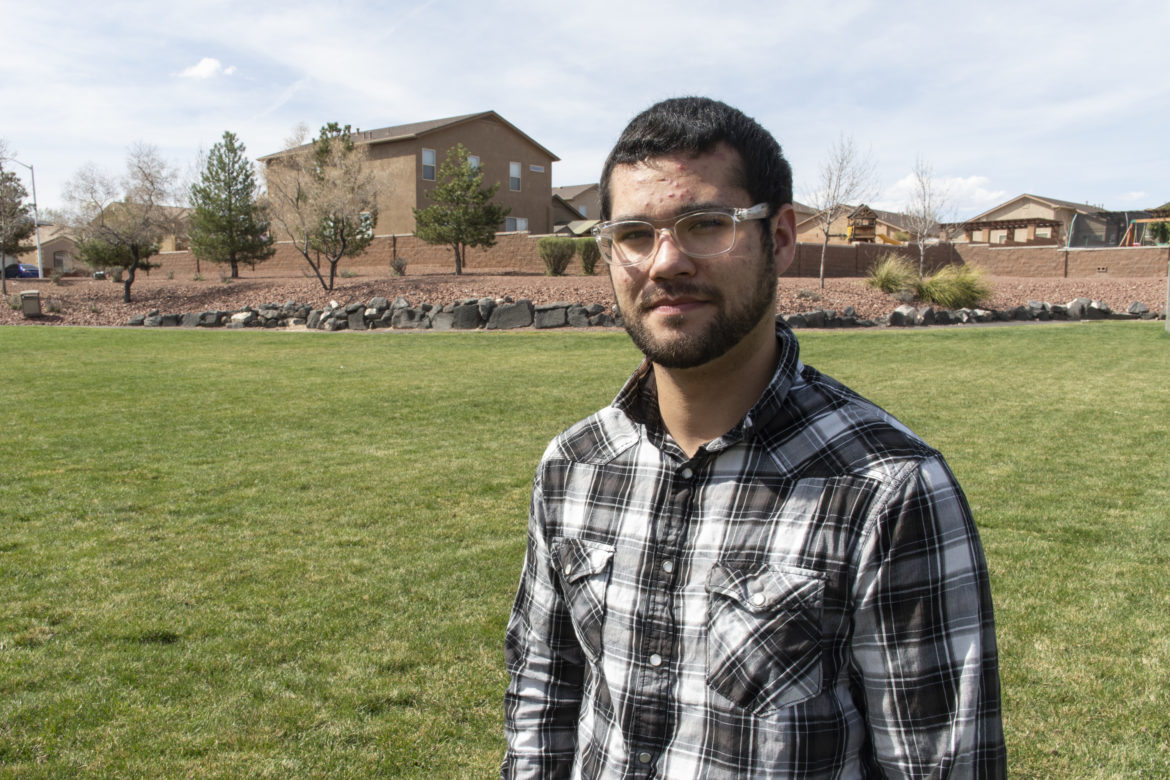 Jonas Palmer at a park on the westside of Albuquerque.

When Jonas Palmer was ordered to move out of his dorm because of coronavirus, he was taken aback. Just two days earlier — while sitting in a classroom at the Southwestern Indian Polytechnic Institute (SIPI) in Albuquerque — he’d been on a conference call with college president Sherry Allison. As Palmer recalls it, she assured all 250 students living on campus that they could shelter in place in their dorms.

But now administrators had decided that wasn’t possible. It was late March, and the school bought Palmer a one-way ticket to Oklahoma — where his mom lives, on a Comanche reservation near Cache, a town of about 3,000 in the southwest quadrant of the state.

“They didn’t do it properly,” Palmer, 21, says. “It felt like hell, and it was so last minute, I couldn’t even catch my breath.”

He had just three days to move out of the dorm, along with a lot of stuff — so much that it annoyed his roommates. He had eight suitcases and several boxes of books, clothes, knickknacks and dried goods. Before enrolling at SIPI in the fall of 2019, he’d lived alone in an apartment near the University of New Mexico in Albuquerque and collected stuff. Some of it was nice — expensive things like a Playstation 4, a floor lamp, a beautiful mirror. Some of it was practical — nonperishable food that provided a sense of security to Palmer, who grew up poor and sometimes hungry. It was overwhelming and time-consuming to deal with the sudden order to leave school. He stayed up late Saturday and missed his flight Sunday morning.

“I kind of wanted to miss my flight,” he says, “just a little bit.”

Home is complicated for Palmer. As a boy, he never felt good with his mom on the reservation — or in the six foster homes he lived in across Oklahoma. The first time he ever really felt safe was in 2015 when, at age 17, he dropped out of school and moved to Albuquerque to begin life anew.

Palmer’s story reflects the inequities that have surfaced in recent weeks as colleges and universities across the country have struggled to move about five million students out of campus housing and back home to their families. The fact is some students don’t have a home they feel safe in, and others don’t have a home at all.

During the 2010s, advocates and scholars began focusing on college students who scramble to find shelter during summer, winter, and spring breaks, when residential housing closes. Some schools allow students to remain on campus if they submit applications explaining their plight. Other schools come up with innovative ways to bridge the gap, such as partnering with local housing authorities. But the majority of schools offer — at most — a list of community resources for students to track down on their own, which can be difficult under normal circumstances. During a pandemic, it’s almost impossible.

In March, most U.S. students were told they had to leave their dorms with only a few days’ notice. Many homeless students landed on friends’ sofas or turned to alumni or crowdsourcing platforms in search of shelter. A minority of schools, including UNM and New Mexico State University, have let students apply to stay on campus.

SIPI is one of 32 fully accredited Tribal Colleges and Universities (TCUs) in the U.S. Located on or near reservations, TCUs are almost entirely run by Indian tribes as a way of expanding access to education for Native American children, who typically have few resources and high dropout rates. Nearly 10 percent of all American Indian and Alaskan Native college students attend a TCU. The first was established in eastern Arizona in 1968 as Navajo Community College (later renamed Diné College), and SIPI was founded three years later. With a two-year program, SIPI is a career technical training school and has partnerships with four-year schools across New Mexico. SIPI’s roughly 500 students come from more than 70 tribes and 18 states.

Palmer was attracted to SIPI because it offered practical learning that would likely result in a job after graduation. He hoped to become an optometry technician. Just as important, the school was affordable, costing him only $595 per trimester (after financial aid). Studies show that American Indian, Native Alaskan, and other indigenous students — often financially strapped — consistently have the highest rates of homelessness (29 percent) and housing insecurity (69 percent) among college students in the U.S.

According to a survey of seven tribal colleges and universities in 2019 by the Hope Center for College, Community and Justice at Temple University in Philadelphia, 16 percent of TCU students reported being homeless, even if temporarily, in 2019. An additional 23 percent described being on the verge of homelessness: couch-surfing or sleeping in cars or motel rooms.

Many students who are homeless or come from unstable family backgrounds have trouble talking about it – and Palmer didn’t tell anyone at SIPI that he felt uneasy about going home last month. Allison, the school’s president, said in a press release that, “prior to departure, SIPI staff ensured students had a safe place to go.” How that process may have worked is unclear, however. Searchlight’s calls and emails to Allison and other SIPI administrators were passed along to the Department of Interior and went unanswered.

According to Palmer, the notice to leave campus came out of the blue and with no attempt by the school to assess his situation. As he packed up and left campus, he felt a familiar feeling: the sense of insecurity that has trailed him since childhood.

In an elementary school picture from when he was 6 or 7, Palmer has a gaptoothed, easygoing smile. There is no anguish on his face – but there was plenty in his life. He had 12 brothers and sisters, and a mom too consumed by addiction and depression to look out for them. He didn’t get the guidance, care or attention he needed. And it made him angry. When he was 6, he hit a girl with a golf club. When he was 7, he broke a window on his mom’s car.

By the age of 13, Palmer had lived in six foster homes. Two of his siblings lived with him, which made the situation slightly easier. Still, he says, “I witnessed some things, tough things.” When he went back to his mom’s as a teenager, he acted out once again — bullying siblings and schoolmates.

He dropped out of high school when he was 16 and decided it was time to get away from his mom. He’d heard that New Mexico was more beautiful than flat, boring Oklahoma, and he had relatives in Albuquerque who offered to let him live with them for a while. He didn’t know for how long, but things were looking up. He would be far from Oklahoma, and the rez, and his mom.

After getting his GED, he enrolled in classes at Central New Mexico Community College, studying to become a certified nursing assistant like his older sister — his only family member to go to college. But the classes were too hard. He especially hated the English classes, which he failed. He thinks maybe he was just too young at the time.

In 2018, when he was 20, he entered an Albuquerque-based transitional program called New Day that provides young people with housing and helps teenagers become self-sufficient adults. A year later, he started at SIPI. He chose to study vision care technology, which he likes because it’s hands-on. And he sees it as a possible boost for his whole family: “I want to own my own business so that I can get my family trained and employed.” Aside from one sister, none of his siblings has a job. School, he thinks, might give him the power to “break the cycle of trauma.”

But just as he started to find his footing and see a future for himself, Palmer was told to vacate campus — a month before the end of his second trimester. In one way, he figures, he is lucky. His relatives moved to California, but friends from Oklahoma now live in Albuquerque — a former member of the Cache school board and her husband, who had been a football coach in Cache. The couple has a heart “for people who had a rough childhood like me,” he says. He is staying with them through the end of April. Then, he feels, he’ll have to move on.

And where does he have to go but “home”? He vacillates between despair and hope. His mom is “in a bad state of mind.” But he can stay with his aunt on the reservation, see nieces and nephews (his “little ones”), and perhaps even return to SIPI for the fall trimester. It won’t be that bad, spending five or six months in Oklahoma. “It helps to think that it’s temporary,” he says.

But what if the dorms don’t reopen in the fall? What if he has to stay on the rez? What will life be like for him in a place he had to leave in order to feel OK?