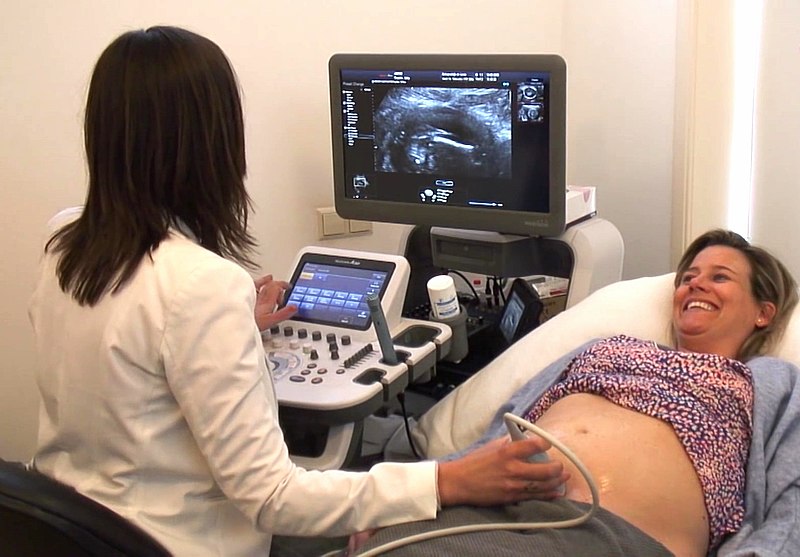 Professionals who assist with birthing center deliveries and at-home births in New Mexico say they are seeing more interest from soon-to-be parents because of the COVID-19 pandemic.

One small midwife clinic in Albuquerque, Anidar ABQ Midwifery, is now getting four to five calls a day for at-home birth queries whereas, prior to the pandemic, it normally received about four to five calls every week or two, according to Claire Bettler, a certified midwife and nurse who owns the clinic. Birthing centers, which provide a more home-like setting for low-risk deliveries, are also seeing an increase in interest. Jessica Frechette-Gutfreund, midwife and executive director of Breath of My Heart Birthplace, said the Española-based birth center has seen its weekly call volume triple.

“We’re getting somewhere between five and ten new inquiries a week. We do three or four births a month. Now we’re trying to do six or seven a month,” she said.

Doulas, who provide support before, during and after delivery to pregnant people and can work with midwives assisting delivery, are also preparing for an increase in home or birthing center deliveries during the pandemic. Stephanie McCreary, doula project coordinator for the grassroots organization Tewa Women United, said the doulas she works with are “getting preparation calls.”

“Midwives are seeking our assistance,” McCreary said. “People are preparing to shift their care.”

Doulas and midwives are also hearing a lot of fear from patients. Some of it is due to a lack of information or changing information on COVID-19, a respiratory illness that is caused by a type of coronavirus.

“It’s definitely a pretty scary time for many people to be pregnant,” Bettler said. “We see a lot of anxiety about all the unknowns around the virus and pregnancy.”

Related: How one woman copes with giving birth in the midst of a pandemic

Bettler said one question that comes up is whether it is still safe to nurse.

According to the Centers for Disease Control and Prevention guidelines, a very small number of infants have tested positive for COVID-19 after birth. But whether those newborns caught the virus before or after the birth is unknown and data so far indicates that transmission through the mother is unlikely.

The CDC’s guidelines state that pregnant people carry the same level of risk for COVID-19 as people who are not pregnant. But, because the virus is new, there is limited data.

Bettler said that breast milk is a benefit to the baby, in part because it boosts the infant’s immune system.

The CDC recommends that if a pregnant person has COVID-19 at the time of delivery, they can still breastfeed by wearing a mask and washing their hands. An alternative is to use a breast pump and have a support person give the expressed milk to the baby. There has been no indication since the virus began that the pathogen can be transmitted through breast milk, according to the CDC.

Pediatric cases of COVID-19 appear to be less severe than cases in adults, according to early data from China. There are also no reported infant deaths from the disease, according to the CDC.

But CBS News reported last week that a pregnant woman in Louisiana gave birth prematurely after being put on a ventilator due to shortness of breath related to COVID-19. Because of “extreme prematurity,” the infant did not survive.

Fear of a hospital-based birth

Another fear for many pregnant people who are planning a hospital delivery is the uncertainty of whether a support person will be allowed in the delivery room, McCreary said.

Some hospitals in New Mexico have changed their policies in response to the public health emergency. The University of New Mexico Hospital in Albuquerque is allowing one person in delivery, according to the guidelines. Presbyterian Hospital and Lovelace Hospital, also in Albuquerque, are allowing exceptions in the maternity unit to their no visitation policy but on a case-by-case basis. Holy Cross Hospital in Taos recently changed its policy, which Gayle Martinez, marketing and communications manager, acknowledged has created some confusion. Holy Cross is not allowing visitors but exceptions can be made for one patient a day, “as necessary for the delivery of appropriate patient care.” The hospital will check the visitors’ temperature before allowing entry.

“We’re very acutely aware of the limitation of capacity and that’s where the policies are coming from,” Frechette-Gutfreund said.

Because hospitals are limiting entry due to the lack of federal infrastructure, which has created a scarcity of personal protective equipment (PPE) for medical providers, the one visitor allowed policy means that, often, a doula cannot attend the birth in person. McCreary said around the country, some doulas and pregnant people have gotten creative, by using Facetime on cell phones as one way to have a doula still involved in the birth remotely. But McCreary said that is still less than ideal.

“Having that extra emotional support extracted from the picture can be traumatizing,” McCreary said.

McCreary said having a doula involved in a pregnancy and birth can reduce the rate of low birth weight, reduces the number of Cesarean births, decreases the use of pain medication during the birth and doulas can help pregnant people who have experienced trauma. Doulas also provide mental health support, lactation support and keep an eye on structural racism and implicit bias during the delivery process so patients can advocate for themselves, she said.

“We’re an extra eye in the room,” McCreary said.

Race and birth outcomes matter. A report from the National Institutes of Health found that perceived racism is a significant predictor of birth weight for African-Americans. McCreary said doulas at Tewa Women United, which serves several pueblos in northern New Mexico, are trained to understand more than complex personal trauma, but also bring an awareness of generational trauma and historical trauma.

According to the National Partnership for Women and Families, native women are three to four times more likely than white women to die due to complications related to pregnancy or childbirth. Some of that is due to historical trauma from systemic racism and colonization, current discrimination and the cycles of poverty that is the result of racism, colonialization and discrimination.

Another way in which doulas are important through the labor process is that they know how labor and delivery are generally supposed to go. That brings reassurance to the person who is delivering.

“Trauma is real and people experience it and it impacts parenting. Doulas are gentle, healing, calm. We need to be in the hospitals. We have a way of approaching our families that is trauma informed and connected. With so much anxiety, having that extra support probably means that much more. I’m hoping people continue to advocate to have this essential birth team,” she said.

McCreary, who is also a doula, said the benefits of doula care are all the more important during the public health emergency.

“Families are very overwhelmed,” McCreary said. “Nobody is caring for a family if they’re social distancing.”

Birth Centers as an option

Breath of My Heart Birthplace is trying to meet the new demand, Frechette-Gutfreund said.

“We’re working hard to understand what is the way to really amplify what our capacity is in this critical time period,” she said.

Birth centers can be an option for new families who don’t want a hospital birth but can’t, for various reasons, birth at home. Breath of My Heart is a retrofitted adobe house. The center has two birthing rooms and has the capacity for a water birth. Frechette-Gutfreund said that is a big draw.

Midwives and doulas assist births at the birthing center, which is minutes from Presbyterian Española Hospital. One important restriction to all births performed outside of a hospital setting is that the pregnancy has to be low risk.

According to the National Association of Birth Centers, one-fourth of hospitalizations are due to childbirth while 0.3 percent of women nationally give birth at a birthing center. But, birthing centers lower the risk of unnecessary Cesarean births for low risk pregnancy and that can lower the cost of a birth.

Frechette-Gutfreund said Medicaid and most commercial insurance providers cover the cost of a birth center-based birth. She said that for people with really high deductibles, the Breath of My Heart is able to offer some discounts and works with patients who cannot qualify for Medicaid.

While Medicaid and some insurance carriers cover midwives, doulas are generally not covered, McCreary said.

Bettler said that if a pregnant person wants to explore a community-based birth, meaning delivery that takes place outside of a hospital setting, a good place to get started is with New Mexico Midwives Association.

The pandemic has affected the community-based birth professionals in another way. They have added additional protocols, including various forms of social distancing and enhanced sterilization measures to ensure that they don’t contribute to the spread of the virus. Some of the new protocols include some telehealth visits to minimize person-to-person contact, Frechette-Gutfreund said.

“That way we can minimize traffic in the birth center but have plenty of time with people in crucial in-person visits to do all the necessary checks and screenings we otherwise do during pregnancy,” she said.