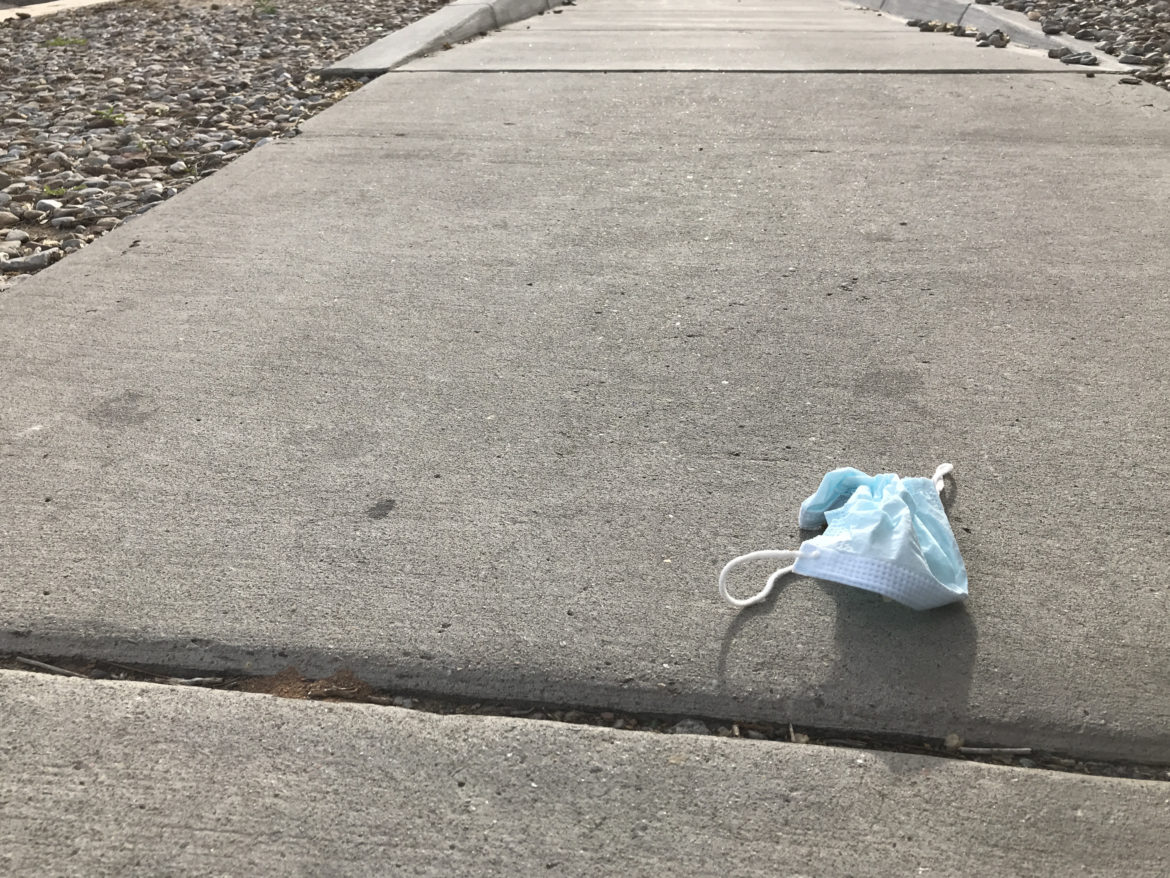 A discarded mask on a sidewalk in Albuquerque.

In late January and early February, American public health experts warned about a possible COVID-19 epidemic, one that would almost certainly require a massive supply of hospital masks, gloves and hand sanitizer.

At the same time, at least two major New Mexico hospitals were throwing those very items into the trash.

“The hospital and the country knew it’s coming. And administration and staff are running around throwing out all sorts of supplies,” said a nurse at Albuquerque’s Presbyterian Hospital, one of the state’s largest medical centers. A 20-year employee of the hospital, she requested anonymity because she had not been authorized to speak to the media.

“It’s sad, it’s horrific,” she said, ticking off a list of what was tossed out: hand sanitizer, masks, intravenous tubing, hospital gowns, bandages. “The whole closet.”

That’s because her hospital at the time thought it had a more immediate concern — an upcoming routine safety inspection by The Joint Commission, a private nonprofit that regularly inspects more than 22,000 American health care organizations. A visit from The Joint Commission typically throws hospitals into a state of heightened anxiety.

The Joint Commission, along with other hospital inspectors, wields tremendous sway over the healthcare industry. If a hospital fails an inspection, it risks a huge blow to its reputation and faces the possibility of losing Medicaid reimbursements and other federal health care payments, which would threaten its very existence. That’s particularly concerning in New Mexico, where about 33 percent of residents are enrolled in Medicaid — twice the national rate.

One thing that can compromise a hospital’s standing with inspectors is the presence of expired supplies — even when those supplies are actually still safe to use. This is why the nurse at Presbyterian was tossing items that were expired, or soon to expire, into the garbage.

Today, the country is facing shortages of some of the very same personal protective equipment that New Mexico hospital staffers were throwing away. These shortages put health workers at greater risk of catching the coronavirus and spreading it to others. Due to the lack of supplies, masks are now being rationed across the nation, including in New Mexico.

In January and February – as the novel coronavirus began spreading in the United States – three hospitals in Albuquerque were preparing for inspections from The Joint Commission. Searchlight spoke with 11 nurses and doctors from two of the hospitals, Presbyterian and the Veterans Affairs Medical Center. All 11 described the same wasteful behavior.

“To have to deal with a Joint Commission audit at the same time [that we were preparing for a surge of potential COVID-19 patients] compounds the pressure and I think led to more rash and wasteful choices when managers were deciding what to throw out,” said a doctor from Presbyterian who, like all New Mexico health care professionals interviewed for this story, spoke on the condition of anonymity.

On Jan. 30, the World Health Organization declared a “public health emergency of international concern.” On Feb. 7, it sounded the alarm about a critical shortage of supplies, including N95 masks, the standard for health care workers treating patients with infectious diseases like COVID-19.

The disposal of medical supplies in advance of an inspection is a regular occurrence across the country, according to medical professionals from Florida to California.

“We don’t want trouble,” explained Zachary Deutch, an operating room medical director at University of Florida’s UF Health North. He called it “common practice” to remove supplies that are approaching their expiration date — just in case.

When inspectors arrive, the presence of anything past its printed expiration date — from vaccines to surgical masks to pudding in the fridge — is grounds for discipline. The standards are meant to ensure that patients aren’t harmed by drugs gone bad or equipment that’s falling apart. It’s an important concern: All physical items decay. Elastic straps on hospital masks can become brittle over time, rendering the masks ineffective. Thin gloves can wear down in storage, developing holes or tears, making them unusable.

“We spend so much time teaching our staff, if it’s expired, you absolutely have to toss it, because it’s a patient safety issue,” said Saskia Popescu, an infectious disease epidemiologist in Phoenix. That makes it challenging, she said, for hospitals to know how or when to change their protocols during a pandemic.

Robert Campbell, director of clinical standards interpretation for hospital and ambulatory programs for The Joint Commission, said in a statement to Searchlight that it’s important for hospitals to remove expired items. But, he added, “The Joint Commission does not look for items or medications that will expire soon.”

It’s an open secret, however, that while printed expiration dates are critically important for some medical products, they’re virtually meaningless for others. A 2017 investigation by the news organization ProPublica found that the federal government has long known that some drugs continue to work well beyond their expiration dates, and yet those dates have not been extended.

In the best of times, tossing supplies might merely be regarded as wasteful and as something that drives up health care costs. But in the worst of times, such as the current COVID-19 pandemic, the behavior can contribute to shortages that cost lives.

Health care workers without proper protective equipment are at higher risk for catching COVID-19 and passing it on to others. According to the Centers for Disease Control and Prevention, more than 9,200 U.S. health care workers have been infected with the disease. At least 27 have died.

Experts around the country didn’t blame the hospitals, but rather said the wasteful behavior was symptomatic of an even greater problem – a generally uncoordinated government response to COVID-19.

“There was by no means a unanimous call that every hospital should clutch on to every single one of these [N95 masks] as long as possible,” said Michael Barnett, assistant professor of health policy and management at the Harvard T.H. Chan School of Public Health. But, he said, “in hindsight, it certainly seems foolish.”

At Presbyterian Hospital, the nurse of 20 years said she personally threw out boxes of expired N95 masks. She didn’t remember how many. Another nurse and a doctor at Presbyterian told Searchlight that they, too, saw people throwing out N95 masks.

“Before and during the inspection period, I threw out some protective gear, certainly,” said a nurse at the VA, who also requested anonymity. He could not recall specifically what he threw away.

Spokespersons from both hospitals denied that inspections have had any impact on their supplies of personal protective equipment and said that they had sufficient inventory.

Presbyterian “reviews inventory [in order] to remove and dispose of expired, or nearly expired, supplies,” whether or not an inspection is around the corner, said Tim Johnsen, senior vice president for hospital operations.

After the inspectors left New Mexico, guidance changed. By the end of February, the CDC said that some expired N95 masks are actually safe to use as a last resort. The Joint Commission curtailed its inspections mid-March, and later wrote on its website that healthcare organizations could now consider using expired masks.

“Somebody gave a reality check when the chips were down,” Deutch said.

He said that such recent admissions should cause the medical profession to reconsider its normal practices.

“We’re used to having an intense amount of waste and excess without any thought of the implications,” Deutch said. Now, the implications are clear. “When there are not a lot of [masks], the rules are out the window. Maybe we shouldn’t have had that rule in the first place.”