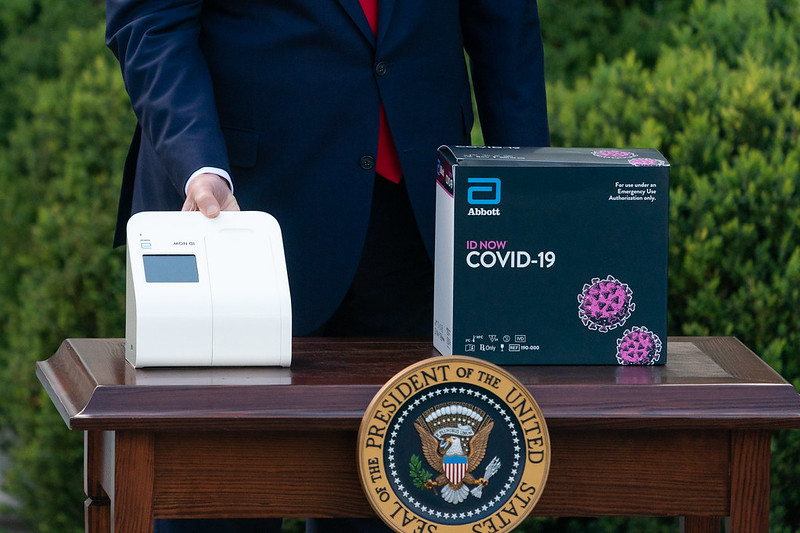 Lab personnel say worries are mounting over the safety of a rapid coronavirus test by Abbott Laboratories that President Donald Trump has repeatedly lauded ― particularly, the risk of infection to those handling it.

Trump and federal health officials have promoted the ease with which the Abbott test can be given to patients, whether at a drive-thru site or a doctor’s office. Another selling point: The test could “save personal protective equipment (PPE),” according to the Department of Health and Human Services.

Yet medical workers say that there’s a serious danger in the test’s design, one that would require much more protection — not less ― for those who administer it.

Running a test involves swabbing a potentially infected person’s nasal passage and swirling the specimen in an open container with liquid chemicals, raising the potential of releasing the highly contagious virus into the air.

When HHS announced it had bought tens of thousands of Abbott’s point-of-care tests for public labs and others across the country, it noted that “only gloves and a facemask are necessary” to administer it.

The notion of donning less protection runs contrary to recommendations from the Centers for Disease Control and Prevention, and medical workers fear that they could be infected while testing others.

Abbott says the test can return a positive result in as little as five minutes. And its development was welcome news for governors and hospitals across the nation desperately searching for COVID tests for patients and scarce protective gear for medical workers.

“What makes this test so different is where it can be used: outside the four walls of a traditional hospital such as in the physicians’ office or urgent care clinics,” says Abbott Labs on its website. It has already been deployed in public health labs and several drive-thru sites, where people wait in parking lots normally occupied by casino- and cinema-goers.

But lab officials and medical diagnostic experts say running the Abbott machine — used for years to detect other pathogens, including the flu ― requires a technician to leave patient specimens out in the open. Gloves and a mask alone would not protect them.

Standard precautions for biosafety protection in labs include good hand hygiene and the use of lab coats or gowns, gloves and eye protection to protect medical workers when a specimen is being manipulated, according to the CDC. Health workers collecting specimens should wear an N95 mask and other PPE.

To run the Abbott test, medical workers or patients themselves swab an individual’s nasal cavity to collect a specimen. Then, the swab is put back into its original wrapping, potentially exposing workers to contaminated materials when they handle it, according to Michael Pentella, the head of Iowa’s state public health lab who chairs the Association of Public Health Laboratories’ biosafety and biosecurity committee.

Abbott’s instructions direct workers to “vigorously mix” the swab with liquid in an open vessel in the machine for 10 seconds — a kind of open system that Pentella called “unusual.”

“This is the only test I know of where you take the swab and you put it back in the paper wrapping,” said Pentella, who hasn’t used the Abbott rapid tests in his lab but has heard concerns about safety from colleagues. “It’s the contamination that could be associated with the wrapper that has some biosafety professionals concerned.”

The committee he chairs plans to issue safety recommendations for lab workers handling the product.

“It’s not like you shouldn’t use the instrument,” Pentella said. “You just have to use it safely.” While Abbott advises customers to use universal precautions for protecting health care workers, the extent to which that happens is up to each organization, Pentella said. “We don’t want to give this disease to anyone.”

Another longtime medical diagnostics expert expressed shock at the way the Abbott test is performed — that a swab gathered from a potentially infected patient must be openly mixed in liquid.

“The best point-of-care instrument is exactly like an automated pencil sharpener,” said the expert, who like others spoke on the condition of anonymity out of fear of retaliation. “You do nothing else.”

A spokesperson for the New York City Department of Health and Mental Hygiene similarly said officials were worried about biosafety and contamination because of how the test is performed, saying its open structure could contaminate the person performing the test as well as the area around the machine.

Trump has been a reliable pitchman for Abbott’s test, calling it a “whole new ballgame” as he showed off the machine in the Rose Garden. In public remarks from Feb. 29 to April 6 ― the day HHS announced it had purchased thousands of tests — Trump called out Abbott 14 times, according to a review of his remarks during daily White House briefings and related events.

“Now, a lot of people love the Abbott test. So do I. You know, the Abbott test is great because it’s, boom, it’s ― they touch, they put it in, and in five minutes you have [a result],” Trump said this week.

As one former HHS official put it: “He likes showy things that can look good.” A White House spokesperson declined to comment further on Trump’s praise of the company.

Certainly the initial HHS purchase of 30,000 Abbott tests to distribute across the country was supposed to do that. About 13,500 of them went to public health labs plus the CDC’s central lab in Atlanta, according to a department spokeswoman. The Indian Health Service received 10,000 tests, and roughly 5,000 were set aside for the CDC’s International Reagent Resource for states to replenish supplies.

Public health labs appeared to be in line for slightly more tests and devices than indicated in an earlier HHS document, obtained by Kaiser Health News, which showed state and local labs would receive a total 5,500 tests and the CDC lab would get 800.

On April 6, when HHS announced its order, millions of Americans were waiting on COVID tests. Multiple public health labs that received a batch from Abbott said they got 15 devices and supplies to conduct 120 tests. Even calibrating the machine would use up a portion of those — before labs could run patient samples. HHS also ordered 50 Abbott ID Now machines for Alaska because of its remote location, according to agency spokesperson Mia Heck.

When asked why HHS said only gloves and a face mask were necessary to administer the test, Heck said the department deferred to CDC guidelines.

Certain states have offered guidance to those handling patient specimens that is similar to the CDC’s. For example, the Washington state health department advised providers to use “appropriate personal protection” when collecting patient specimens ― at minimum, a gown, gloves, N95 respirator masks and goggles or a face shield, according to emails obtained through a public records request in King County, Washington.

Gary Procop, director of virology at the Cleveland Clinic, said he recommends that personnel either wear appropriate protective gear or use the test in a biological safety cabinet, which protects workers behind a glass shield. The large integrated health system is weighing whether to use the quick test in certain settings, including where there’s a low prevalence of disease, and had concerns about workers handling open swabs.

“What you really want to have is droplet precautions,” he said in an interview.

As safety concerns grow, some state officials are still complaining about a lack of supplies from Abbott — despite its statements that it would manufacture 50,000 tests per day.

“It’s incredibly frustrating because there was a lot of talk about this device, there was a lot of hype on it nationally, and that was wonderful,” New Hampshire Gov. Chris Sununu, a Republican, said at a news conference this month. “And then when they showed up, expectations were set really high as they should be. But to actually have 13 of these devices and have no way to use them, I’m banging my head against the wall.”

Abbott has won considerable publicity for the fast Abbott test since FDA granted emergency authorization on March 27. The company has partnered with CVS Health and Walgreens to set up drive-thru COVID testing sites in multiple states.

As of Monday, nine of 15 planned Walgreens sites in seven states are open with the Abbott tests. Walgreens pharmacists are tasked with overseeing patients and “PPE is used throughout the process,” a spokesperson said, without responding to questions about protocol for handling specimens and which specific items employees wear.

“We won’t open a site until we are sure we have what we need,” she said.

In Washington, people expected to be in close contact with Trump ― including reporters covering his daily coronavirus briefings — have also been tested on Abbott machines.

Abbott spokesperson Darcy Ross said the company has shipped more than 850,000 rapid tests since April 1, although it’s unclear how many went to private-sector clients versus public health sites.

“We recommend our customers follow the CDC recommendations and guidelines for point-of-care sample handling and PPE. Our product information directly links to CDC guidelines,” she said.

The Abbott tests have had several other hiccups. For example, the Food and Drug Administration this month said Abbott would revise its instructions after one method for preserving specimens ― known as viral transport media — caused inaccurate results because patient samples were too diluted.

Pentella, the Iowa lab official, said, “People are shifting their concern from the viral transport media to, now you have a swab in a wrapper that’s potentially contaminated with nasal secretions from the patient.”

On an April 15 call held by FDA officials on the development and validation of COVID-19 tests, Timothy Stenzel, director of the agency’s Office of In Vitro Diagnostics and Radiological Health, was asked whether the agency has a process to remove authorizations already granted for tests found to be ineffective or dangerous, according to audio obtained by Kaiser Health News. The FDA has granted more than 40 emergency approvals for COVID-19 tests since Feb. 4.

He responded that the FDA’s “traditional way” is for the agency and developer to make decisions together on the best path forward.

“If there are indeed performance issues,” he said, “what is the best way to address that as quickly as possible?”