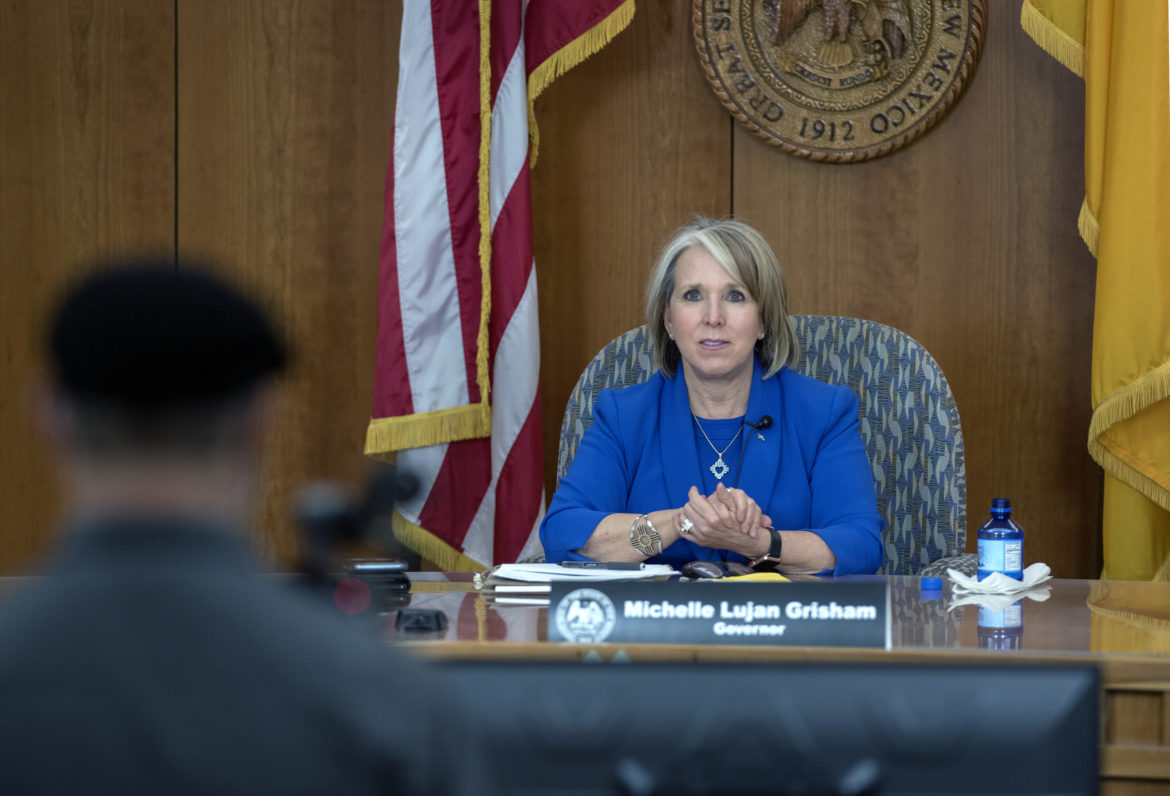 New Mexico Gov. Michelle Lujan Grisham gives an update on the COVID-19 outbreak in New Mexico and the State's effort to limit the impact of the disease on residents. The news conference is being held at the State Capitol in Santa Fe, Friday April 24, 2020. Pool Photo

Gov. Michelle Lujan Grisham said the idea that some communities in the state feel they don’t have to comply with the state’s restrictions are “tantamount to opening up a pool and having a ‘pee’ section. This makes absolutely no sense whatsoever.”

The statement came during a Friday afternoon press conference that included updates on the state’s unemployment efforts, federal stimulus money and more.

But Lujan Grisham also continued to urge residents across the state to comply with orders to make sure New Mexico can continue to flatten the curve of new COVID-19 cases and hospitalizations.

She also addressed those who live near surrounding states that are themselves easing restrictions, and whether those who live in New Mexico would travel .

“I worry greatly about the impact here,” the governor said.

She noted that COVID-19 initially spread because of travel.

“People on planes, people in cars, people on buses, people on trains. That’s how it spreads,” she said, and urged New Mexicans to resist the urge to travel to other states and to instead remain at home as much as possible.

Lujan Grisham was asked about the mayor of Grants, who said he will allow non-essential businesses to reopen with social distancing efforts in place when she made her swimming pool analogy.

She said that if businesses open without instruction, they will be subject to receive a cease-and-desist order from the New Mexico State Police. These orders could result in fines for the companies that disobey the order.

“I absolutely don’t want that to occur,” Lujan Grisham said. “So I hope the mayor heeds all of our advice and walks back that statement.”

Mayor Martin “Modey” Hicks had previously made his own analogy, comparing the governor to Adolf Hitler and to state police as the gestapo, the Nazi secret police that, among other atrocities, tortured and killed Jews. The Anti-Defamation League Mountain States Region condemned Hicks’ comments.

Lujan Grisham said it was too early to reopen elective procedures at hospitals, but that they are in the process of evaluating when it would be safe to do so.

Dr. David Scrase, the Secretary of the Human Services Department, said, “We are looking for preliminary recommendations.”

The state, like those across the country, halted elective procedures as a way to save personal protective equipment, drugs and hospital beds that would possibly be needed for COVID-19 response.

Lujan Grisham said the state followed broad guidance from the American Medical Association and the U.S. Centers for Disease Control and Prevention and that she is focusing on advice from scientists and doctors.

“I believe in science,” she said.

Bill McCamley, the Secretary of the Department of Workforce Solutions, attended the press conference as well and spoke about the unemployment process.

He addressed the long wait times that many have experienced as the state’s unemployment system has become overwhelmed.

“We are very, very sorry for all of the frustration that people have felt in working through the unemployment system,” McCamley said.

McCamley said in January, 9,600 New Mexicans received unemployment benefits each week, and the state received 650-800 applications per week. Since March 15, days after the public health emergency order, 79,806 state residents have received benefits and the state had 123,816 active applications as of the night of April 22.

To address this, McCamley said that DWS has added 145 staff for its insurance operations center, including support from six other state agencies, and the call center hours have been expanded from 7 a.m. to 7 p.m. Another 80 additional staff is working with adjudication.

The new unemployment benefits now include additional funds from the federal CARES Act, he said.

“Every single person who is getting any kind of unemployment… is going to get that additional $600 added to their weekly benefit through the end of July,” he said.

She said that New Mexico small businesses received $1.4 billion, spread among 8.277 entities, from the first round of Paycheck Protection Program loans through the CARES Act. The money is distributed directly from the federal Small Business Administration and the state isn’t sure which companies received the aid, Lujan Grisham said.

The loans are designed to go to small businesses to allow them to keep employees on staff during the COVID-19 pandemic. If at least 75 percent of the loans go towards keeping employees on payroll, the loans will be fully forgiven.

A second round of money will open up on Monday through the latest COVID-19 relief bill, and Lujan Grisham encouraged New Mexico businesses to apply.

She also highlighted programs the state has to aid businesses, including zero and low interest loans.