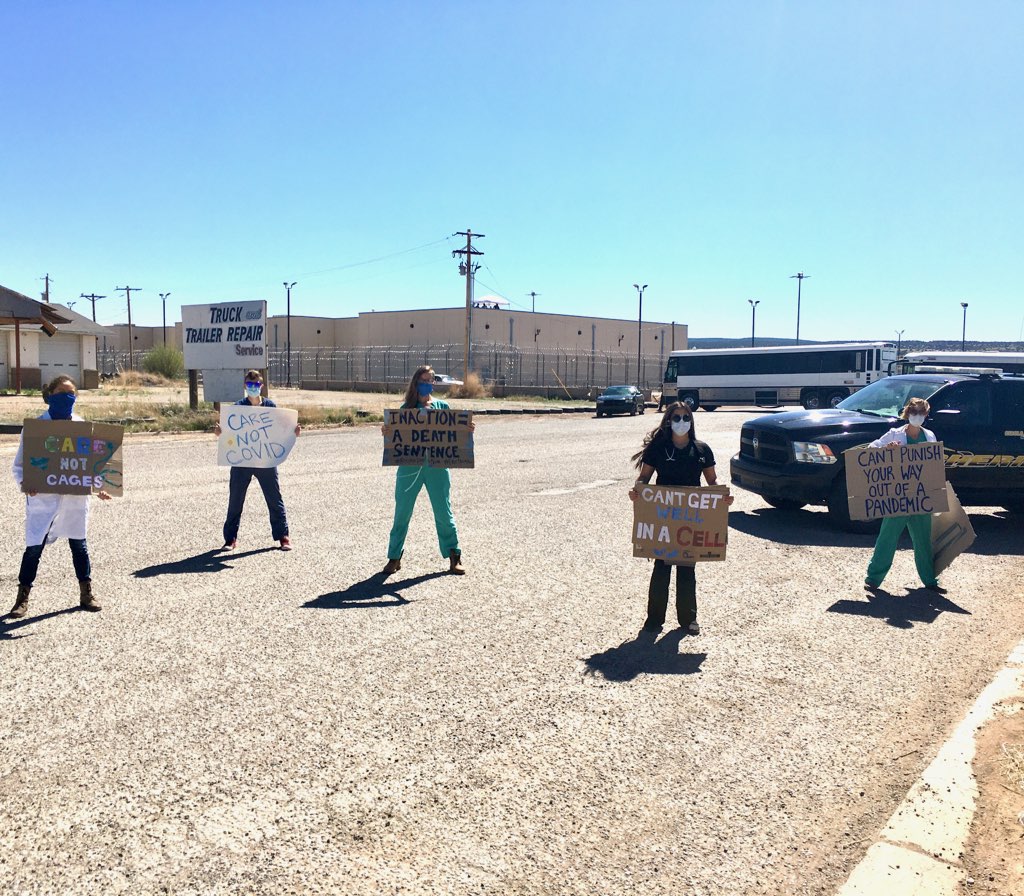 Without intervention, as much as 100 percent of immigrants in detention centers could test positive for COVID-19 within the next 90 days and overwhelm state healthcare systems, according to a recent study.

The study, produced by the Washington D.C., nonprofit advocacy group the Government Accountability Project, states that, optimistically, 72 percent could become infected with COVID-19 in immigrant detention facilities. The projected 100 percent reflects the pessimistic estimation, the study says. Those projections mean that state health care systems would be overwhelmed, the study reports.

A group of advocacy organizations organized a rally, called “Free Them All Friday,” which consisted of about 30 cars that drove around the Cibola County Correctional Center, which holds immigrant detainees for Immigration and Customs Enforcement, Friday afternoon to try to bring attention to this problem. Leah Jo Carnine, an Albuquerque healthcare worker who participated in the rally, said that it’s not just a problem for migrants. She said it puts all residents of New Mexico in danger because detention workers would also be exposed, test positive and could take the disease home to their families and communities.

Carnine is concerned, in part, because such a scenario will overwhelm New Mexico’s healthcare system, one that she is personally a part of. She works for a clinic in Albuquerque.

“We will be facing the same crisis that’s already occurring on the Navajo Nation and we’ve seen in New York City and elsewhere where too many people need hospitalization and ventilators,” Carnine said. “We should not be creating a situation where we are competing for ventilators in rural New Mexico. It’s a risk on so many levels and it’s a really urgent situation.”

The organizations behind the rally, Millions for Prisoners New Mexico, Incarcerated Workers Organizing Committee (IWOC), Beyond Borders, and Showing Up for Racial Justice (SURJ), have held rallies at the Metropolitan Detention Center in Albuquerque, the Central New Mexico Correctional Facility in Los Lunas, and at courthouses and Sheriff’s departments in previous weeks, Carnine said. She said the groups chose to organize at an immigration detention center this time to demand that people be released from both prisons, jails and immigrant detention facilities.

So far, only a handful of inmates in state correctional facilities have been tested for the disease caused by the coronavirus, according to New Mexico In Depth.

When asked if Gov. Michelle Lujan Grisham may release prisoners held in state correctional facilities more quickly, her office directed NM Political Report to Lujan Grisham’s comments during an online press conference Thursday. She said, of testing inmates in the state, “we’re on it,” but said that, in terms of surveillance, “we haven’t been as robust getting to all sites.”

Adriel Orozco, a lawyer who works with immigrant detainees, said there are five COVID-19 positive cases at the Otero County Processing Center, one of three U.S. Immigration and Customs Enforcement (ICE) facilities in New Mexico.

There are no reported cases of the disease in the Cibola County Correctional Center or at Torrance County Detention Facility, he said.

But all three of the immigration detention facilities are privately owned.

The U.S. Immigration and Customs Enforcement did not respond to a request for comment, but the website states that ICE has suspended social visitation in all detention facilities and implemented other protocols to reduce the spread of Covid-19.

But Orozco said that what he hears from his clients who are on the inside are that workers are not wearing masks or given other equipment to prevent the spread of the disease. Immigrants are refusing meals because they are expected to eat in a dining room that houses 350 people at once. The Cibola facility asked immigrants to sign a liability waiver to receive a mask, Orozco said. Immigrants receive one small bar of soap and there are 15 to 20 people housed in each pod.

“They can’t stay six feet from each other,” Orozco said.

Orozco estimates that in all three immigrant detention facilities in New Mexico there are 1,000 to 1,300 people being held because they arrived at the border and await while the federal government determines if they can stay. Many are asylum seekers who say their home countries are no longer safe for them.

Carnine said immigration should “not be a death sentence.”

“I’m part of the community of New Mexico. We are facing a collective crisis. There’s no way to separate out our fate from those who are incarcerated or immigrants in detention centers,” she said.