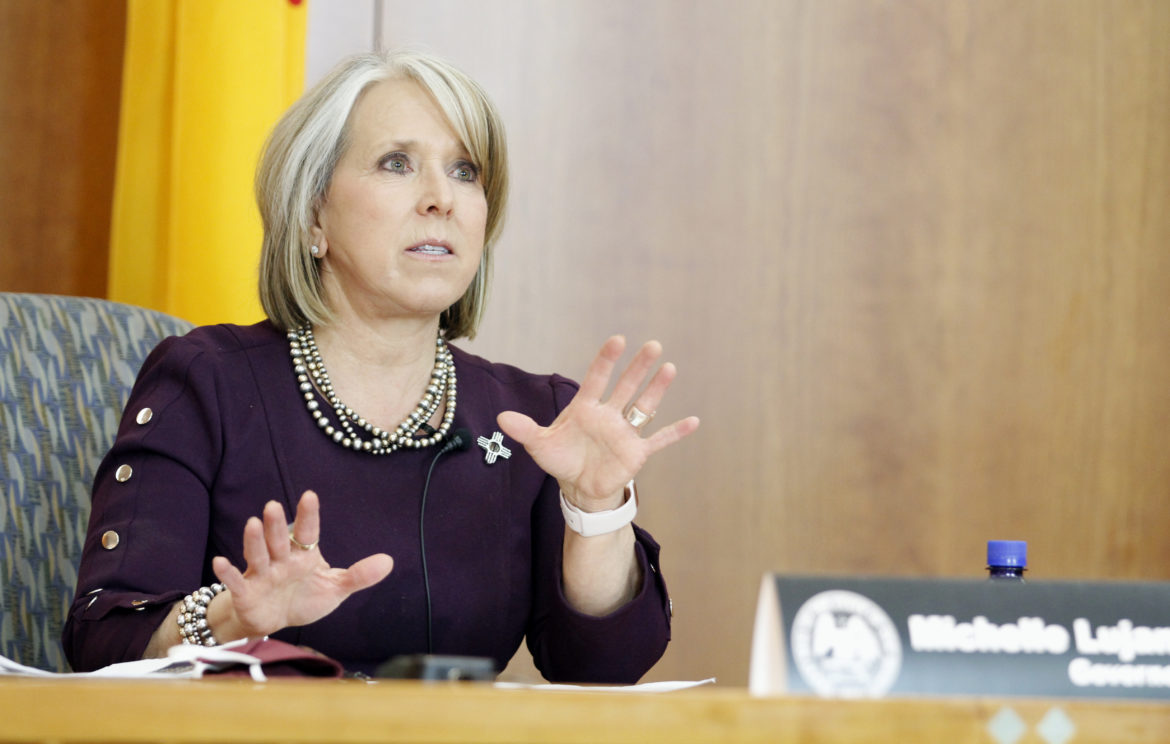 The governor announced that, beginning tomorrow, some restrictions put in place by the state will be eased, but she urged that New Mexicans should still remain home as much as possible and noted that the stay-at-home order will remain in place.

The new public health emergency order goes into effect on May 1 at midnight and runs through May 15.

Gov. Michelle Lujan Grisham said that this came because the curve has flattened for much of the state, though she emphasized that northwestern New Mexico is still in danger, as cases continue to grow.

Human Services Department Secretary Dr. David Scrase also announced that the state would allow hospitals to increase operations for medically necessary surgeries not related to COVID-19. As part of an order to reduce the use of personal protective equipment (PPE), the state banned elective procedures.

Still, Scrase said, “We’re asking folks as they resume to go no more than half-capacity” for a few weeks and that hospitals are in “absolute and complete compliance with all DOH guidelines” including those that are part of the public health emergency order.

Among the changes that the governor announced were allowing non-essential retailers to open curbside pickup or delivery services, that state parks will be available for day-use as staff is available, vets and pet services can operate, golf courses can open, but only for golf and not for dine-in food service or retail, and that gun stores can operate by appointment.

Liquor stores are not able to open, because statute prohibits them from operating curbside pickup or delivery services.

“Our legal review indicates pretty unequivocally I just don’t have the power to do it,” Lujan Grisham said.

Other places that will not be able to open are indoor malls, gyms, salons, theaters, casinos, and dine-in restaurants and bars.

Gatherings of five or more people will remain banned.

She said that the partial reopening would make things more difficult, not easier, for New Mexicans when it came to social distancing.

Scrase also addressed those who wanted to travel to other states that have less restrictive policies, like Texas, to go shopping or go to a restaurant.

“My specific medical advice to anyone who is thinking of doing that is: Do not do that,” he said.

Lujan Grisham also said that she hoped people would support New Mexico businesses, by either buying online or through curbside or delivery.

“We think this first step will provide a sorely needed morale boost to people across the state,” Moore said in a statement. “It will also give businesses their first taste of recovery and help them put procedures in place in order to provide services in a way that is safe for their employees and their customers.”

The state remains in the preparation phase to reopen the economy, but hopes to move on to Phase One of recovery by mid-May, which would include more easing of restrictions and allowing more businesses to reopen in some form, including restaurants.

To get to that level, Scrase said, would require a decline in the “Effective rate of transmission,” or rate of spread. This measures how many people each person with COVID-19 spreads the disease. New Mexico’s was about 2.5 as of March 28, which means that each person with COVID-19 spread it to, on average, 2.5 people. That number has dropped to 1.24, statewide. To further expand what businesses can reopen, Scrase cited a number of 1.15.

“As long as that number is greater than 1, the epidemic continues to spread,” Scrase said.

When the state is able to reach the requirements for the first fully fledged phase of recovery, the state would allow all retailers to operate at 20 percent fire code capacity, with proper COVID-19-safe practices, allow dine-in restaurants and bars to have up to 50 percent occupancy without barstool or standing service and for gyms, salons, hotels and houses of worship to operate in a limited fashion.

But, she warned, it would be up to New Mexicans to continue to socially and physically distance and remain home as much as possible for the state to move forward.

“How well we do this means how safely we can introduce this,” she said.

“The governor, after weeks of inaction, has decided to listen to New Mexicans struggling to maintain their livelihoods,” he said in a statement Thursday afternoon. “This is a start, but we still have a long way to go to repair a badly damaged economy.”

Cases continue to grow in northwestern New Mexico. Of the 198 newly announced cases by the state of New Mexico on Thursday, 74 were in McKinley County and 45 in San Juan County. And of the 11 newly reported deaths, 10 came in either McKinley or San Juan counties.

The area remains one of the hardest-hit areas in the country, and Lujan Grisham noted that the new order would have provisions specifically for that portion of the state.

“New Mexicans should expect that the relaxing of restrictions will not apply to the northwest region of the state,” she said.

She also said she would be willing to apply further restrictions to the area, even as Gallup’s mayor asked the governor to declare a state of emergency within the city’s borders.

To that end, Lujan Grisham announced members of a state Navajo Nation Rapid Response Team, which she said would help the state address the spread on the Navajo Nation.

She said that because the Navajo Nation is spread across three states, residents do not have reliable access to health care or other federal services and that it is incredibly rural “creates the perfect opportunity for gaps” in the government response.

An order also issued guidelines for polling locations. The state Supreme Court ordered that polling locations must remain open, though asked elections administrators to mail absentee ballot applications to all registered voters who are eligible for the primary election.

The order said that only four voters at a time would be allowed in any voting location that is not a mobile unit and only two at a time in a mobile unit. Those waiting outside would need to wait spaced at last six feet from each other.

More than 50 people in Wisconsin who either worked or voted in the Wisconsin primary election in April tested positive for COVID-19.