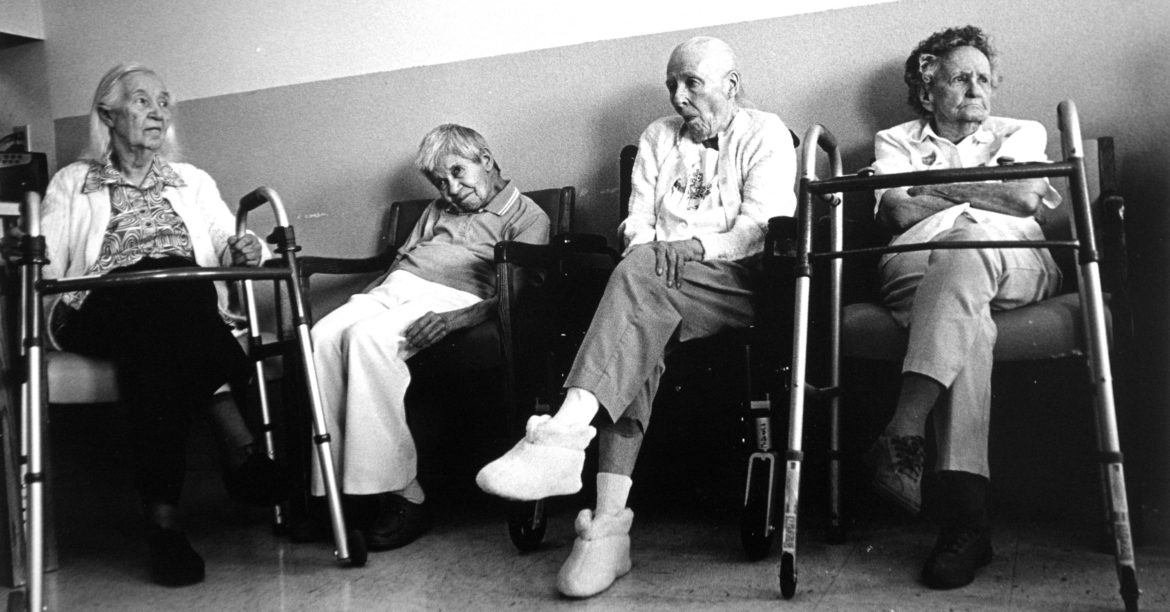 Sam Adams/Courtesy of the Palace of the Governors Photo Archives

Residents at a nursing home in Los Alamos, circa 1996.

Almost all of New Mexico’s 71 nursing homes have violated rules meant to protect their most vulnerable residents from infectious disease since 2017.

In total, 85 percent of the state’s facilities “failed to provide and implement an infection prevention and control program,” according to the U.S. Centers for Medicare and Medicaid Services (CMS). A Searchlight New Mexico analysis of CMS records found that nearly all of the violations occurred in the last two years — a pattern of deficiencies with deadly implications as COVID-19 descends on nursing homes from Farmington to Las Cruces.

In more than half of those cases, state health inspectors certified that the nursing homes had corrected their poor sanitation practices — only to discover the same problems in a subsequent inspection.

In fact, 14 of the 15 nursing homes that have seen coronavirus cases (as of May 4) have previously been cited for infection prevention and control violations. The one exception, Welbrook Senior Living in Farmington, is a newer facility that has not yet been rated.

Statewide, many of the violations were for things like failing to wash hands or improperly handling dirty laundry — deficiencies that were considered minor before the pandemic and rarely resulted in a fine. Others were far more serious.

During their most recent visit in 2019, inspectors observed employees perform blood-sugar tests without washing their hands and placing equipment used to draw blood on a table caked with “white, dry, crusty material.” During that same visit, inspectors noted in their report, a resident’s catheter bags were seen dragging on the ground, and staff were using contaminated personal protective equipment — practices that “could result in infections and could result in illness, debility and death.”

At The Village at Northrise, a for-profit home in Las Cruces, inspectors found that employees did not clean the room of a patient with an unnamed “communicable infection” that causes “severe diarrhea” and “can lead to intestinal inflammation and kidney failure.”

And at Canyon Rehabilitation — the facility recently authorized by the state to care for coronavirus-positive nursing home patients despite its well-documented history of serious health and safety violations — inspectors discovered a slew of issues: poor ventilation between the biohazard storage room and laundry room, equipment not being disinfected between use and residents sitting in soiled clothing for hours. In an April 16 email, a DOH spokesperson told Searchlight that Canyon was now in compliance with all health and safety rules.

Many of the state’s highest-rated nursing homes — including Advanced Health Care of Albuquerque and The Montebello on Academy, also in Albuquerque — have been cited for lapses. Advanced had one infection control violation and several laundry-related violations. Montebello was cited for a hand-washing violation and a failure to properly decontaminate laundry.

In March, CMS ordered its inspectors to focus exclusively on infection control in nursing homes throughout the country. Many critics say it’s too late — the problems are so deeply embedded that turning them around quickly in the face of the pandemic will be extremely difficult.

“The infection control procedures prior to COVID were already horrible,” said Dusti Harvey, an Albuquerque attorney who for years was an in-house lawyer for a major nursing home chain.

Making matters worse, Harvey said, many nursing homes are chronically understaffed, forcing employees to rush from one patient to another without the time to take proper sanitary measures.

Federal inspection reports and internal corporate emails reveal that the state’s largest for-profit chain, Genesis Healthcare, staffs its homes based on population counts rather than medical need, in violation of federal guidelines — a money-saving strategy that threatens to expose residents and staff to COVID-19.

“It was a recipe for disaster,” Harvey said. “And, well, here we are.”

Rachel Mabe contributed to this story.

Want to know if a particular nursing home has been cited for infection control problems? Text the word Searchlight to 505-427-2777. A reporter will respond with info about that facility’s violations and a link to its full inspection reports.