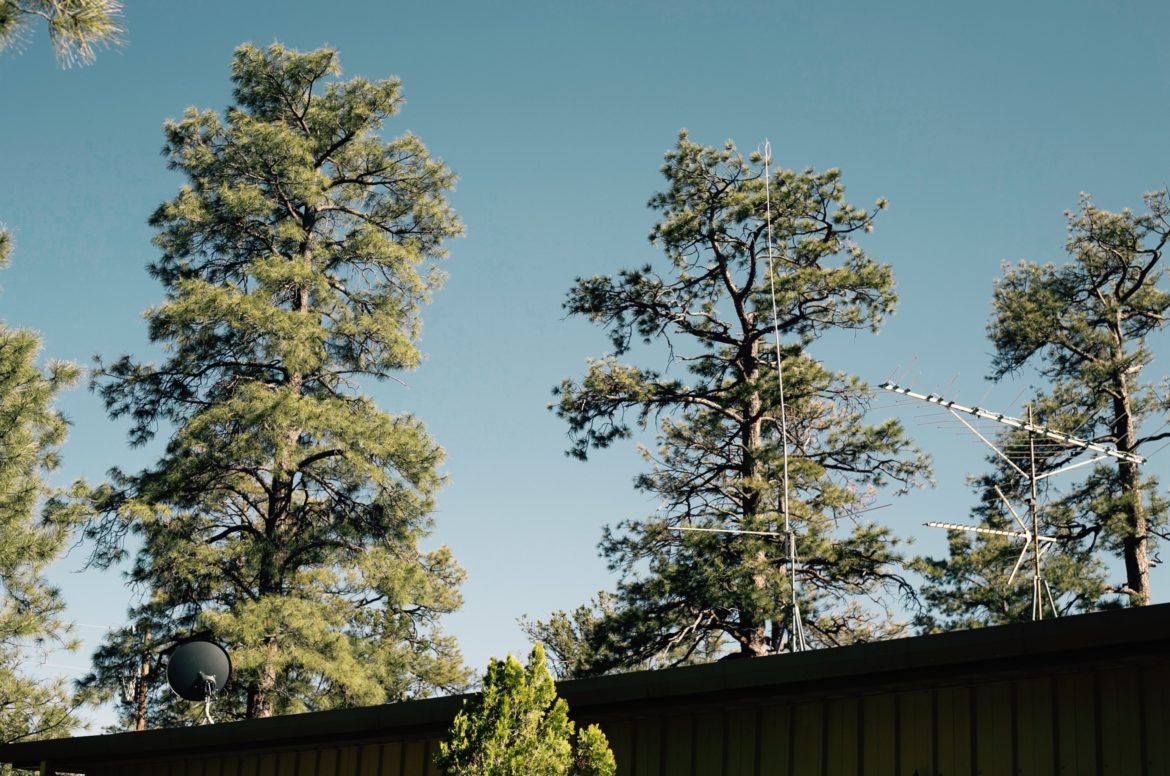 Antennas and a satellite dish search for a signal on top of a house in rural Vanderwagen, NM, where there is not high-speed fiber or cable internet.

When the University of New Mexico announced March 19 that all spring semester classes would move online and all students should move out of the dorms, 21-year-old communications major Hannah John went home. But she couldn’t stay long.

Tall Ponderosa pines are the major architectural feature of Vanderwagen, population 1,700. Sandwiched between the Navajo Nation and Zuni Pueblo along New Mexico’s western border, it’s about half an hour away from Wingate High School, a Bureau of Indian Education school, where John’s parents teach. The school has been online since the 1990s, but at home in Vanderwagen, John’s internet is still spotty.

“I went home for a week to test it out, but it was super slow,” John said in a phone interview. “It wouldn’t Zoom or anything.”

The percentage of households with broadband is lower in New Mexico than any state or territory except Mississippi and Puerto Rico, according to a November, 2019 report by the state Legislative Finance Committee.

And access is particularly scarce in New Mexico’s rural areas and on Indian lands, where fewer than half of households have fixed broadband, according to a report by the Federal Communications Commission. That pattern matches the national average of only 53 percent of Native Americans on tribal lands who have access to high-speed internet.

Slow internet is frustrating and disappointing, but it’s not the only reason some students struggle with the schooling upheaval caused by the global COVID-19 pandemic.

“Culturally speaking, our connectivity is human-to-human. If they don’t have a strong relationship with faculty, they are falling through the cracks,” said Pamela Agoyo, director of American Indian Student Services at UNM.

“Students are telling me they didn’t sign up for online classes,” Agoyo said. “They want to be in a classroom with a professor, face to face.”

That interaction is important for relationship building, she added.

UNM is trying to respond to the challenges with short- and long-term strategies.

“We just gave out a round of emergency scholarships to students having challenges because of COVID, and right now we’re advertising summer scholarships because we know students might need to take summer classes to maintain their scholarships,” Agoyo said.

The scholarship money can be used in part to travel from home to places where students can access high-speed internet.

After a week of spotty service in Vanderwagen, John returned to Albuquerque, where as a resident of UNM’s new Lobo Rainforest housing complex downtown, John and other Navajo Nation students were exempt from the main campus move-out rule.

But it’s not the same. John said she doesn’t learn well online—she prefers the classroom environment.

“Before we moved online the majority of my classes were discussion based, but some of my professors aren’t Zooming,” she said, lamenting that those conversations no longer take place in real time.

With only a few weeks of spring semester left, John is committed to finishing it out, but she’s anxious about fall. UNM hasn’t announced whether classes will take place in person or not.

Native American students make up 15 percent of UNM’s student body across all campuses, Agoyo said. When UNM closed the dorms March 24, many Native students were forced to choose between petitioning for permission to stay on campus, crashing with friends in cramped quarters or returning home where schoolwork is challenged by worries about the coronavirus—and technology.

“I’m hearing from a lot of students who moved home because they had to,” Agoyo said.

McKinley County, where John’s family lives, is bearing a disproportionate brunt of the COVID-19 pandemic. Last week, coronavirus infections in the rural county overtook those in Bernalillo County, which is home to Albuquerque and has nearly 10 times the population.

Statewide, Native Americans make up more than 50 percent of the state’s coronavirus cases, while only 11% of the population.

Agoyo said she’s talked to several students who’ve tested positive, and are sick, but are trying to stay connected. That’s a struggle.

“Even though many of them are happy to be at home they’re stressed out of their minds because they can’t complete their assignments even if they want to,” because of technology, she said.

John said she had a friend who had relied on internet access at UNM’s Gallup Branch, where she was studying. “They moved classes online and she only got access at the branch,” John said. “Now she’s at home and she’s struggling.”

In late March the University of New Mexico began offering to lend mobile hotspots and iPhones, but the supply is limited—and dependent on good cell service, which can also be hard to get in remote areas.

New Mexico Senators Tom Udall and Martin Heinrich have introduced legislation aimed at increasing access in tribal communities. It is cosponsored by Rep. Deb Haaland, D-Albuquerque, one of the two female Native women to serve in Congress.

“Broadband has been an issue in New Mexico in rural communities, and definitely in Indian Country, for a very long time,” Haaland said in a phone interview. “The pandemic has pulled back the blanket and the sun is illuminating these disparities.”

The lack of good internet access is unfair and frustrating, Haaland said. In some communities fiber optic lines bring access tantalizingly close, but technical or licensing issues prevent them from connecting.

“I had somebody from Jemez Pueblo come into my office recently and tell me ‘The fiber is only 40 feet away, but we can’t use it,’” she said.

She’s working on a proposal that would ask regulators to cut through red tape and give tribal authorities temporary access.

“Internet needs to be a fundamental right, like electricity,” Haaland said.

In Albuquerque, Hannah John is still enjoying the high-speed internet at Lobo Rainforest, but her room there isn’t guaranteed for fall. She’s thought about dropping out, she said.

“If classes are online and I don’t have housing [in Albuquerque], I don’t know…” she said, leaving the thought unfinished.