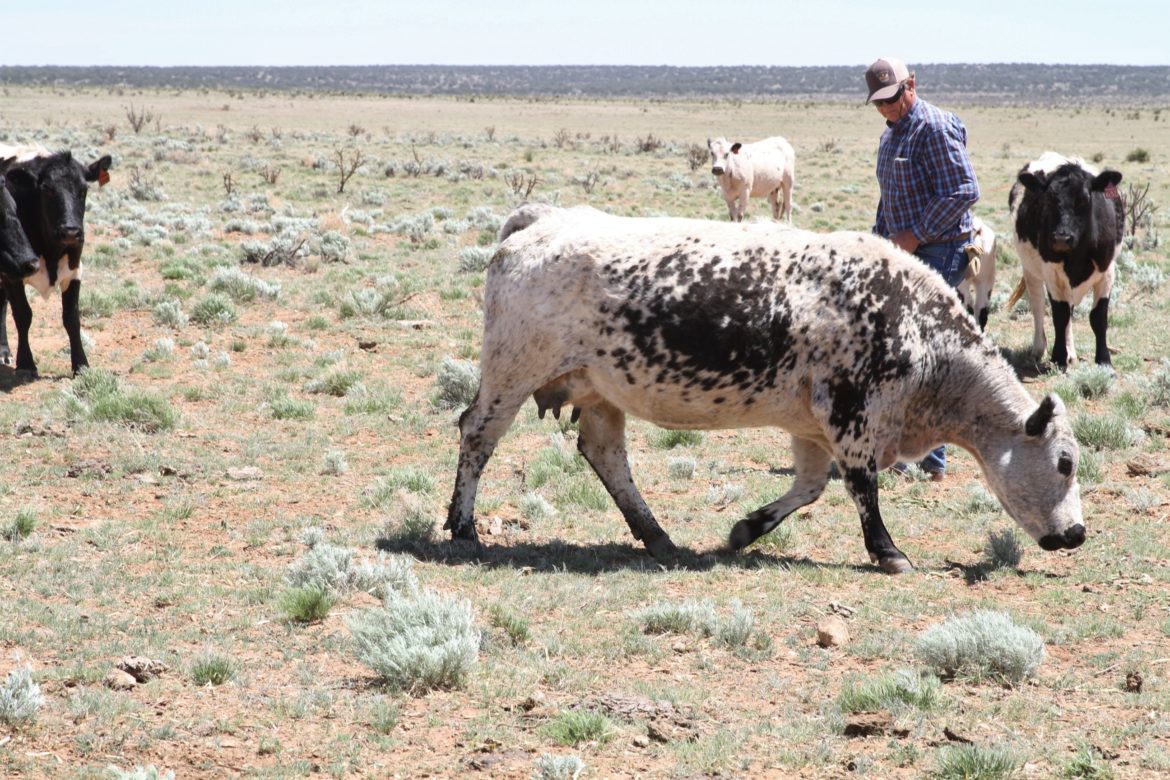 Aubrey Dunn and his wife Robin run a cattle operation north of Carrizozo, NM, and the couple, now grandparents, own roughly 250 head of cattle.

Like other cattle ranchers, Dunn, who was formerly the New Mexico State Land Commissioner, is part of an industry that faces high prices for cattle upkeep and low sale prices per head of cattle at market.

Because it costs an average of $300 to $400 annually to maintain a cow and cattle prices have been trending downward, Dunn said the cattle business has not been profitable in recent years.

In the past, drought or finding affordable feed or space to accommodate livestock were typical problems for a cattle rancher—but that was before the COVID-19 coronavirus forced the shutdown of meat processing facilities across the country.

Dunn said this could create long-term hardships ahead for New Mexico cattle producers.

Sid Gordon, New Mexico State University Extension Office agent in Otero County, said some producers have part-time businesses or jobs because it can take hundreds of head of cattle for a single family to be successful at cattle production alone, Gordon said.

“You say, ‘Is it worth selling right now, well, can I afford to hold onto them?’” Gordon said.

According to a 2012 NMSU study, the average net income per cattle ranch in the state was $5,628 while only 2.1 percent of beef cattle ranches showed greater than $500,000 in value of product sold.

Gordon said the question now is whether producers can afford to maintain their cows until market prices improve.

“Most New Mexico cow calf ranchers sell their calves in the fall and based on what’s happening, last year was a bad year and this year looks to be even worse,” Dunn said.

“It looks to me that come fall, there’s going to be a huge oversupply of cattle and the prices today are already below profit margins.”

Dunn’s response to these challenges is to “forward sell” his cattle earlier this year on an internet auction in May for a fall delivery.

Dunn has also moved toward selling retail beef by the pound in November to a company in Santa Fe and started selling at area farmer’s markets.

Dunn sells animals directly to the consumer and utilizes a Colorado-based USDA-certified meat processor for other retail meat sales.

“We’re getting that cut into hamburger by the pound and steaks but it’s all USDA-inspected so we can sell it by the pound,” Dunn said.

“Much of [the] commercial farming industry has price support mechanisms so that we can keep some of the highs and lows out of the market; they are subsidies. The beef industry has never gone that route,” Gordon said.

Meatpacking plant closures across the country have accelerated in recent weeks due to the virus, despite an executive order signed by President Donald Trump on April 28 aimed at keeping processors open while following guidelines to ensure employee safety.

A single beef processing plant closure could result in more than 10 million servings of beef lost in a day and closing a single plant could eliminate more than 80 percent of the country’s supply of a particular meat product – like ground beef – to an entire grocery store chain, according to the order.

As of May 7, there were 10,800 positive cases tied to meatpacking facilities in at least 170 plants in 29 states, according to the Midwest Center for Investigative Reporting, an independent nonprofit newsroom focused on agribusiness.

“The risk of spread within all essential businesses is on our radar. The very first confirmed case of an employee at the Santa Teresa plant, led to the business voluntarily allowing the Department of Health inside their facility to test their employees,” said New Mexico Department of Health spokesman David Morgan.

“The business is cooperating with the department in developing the guidelines to prevent further COVID-19 spread while remaining open.”

Retail beef prices rise during due to backlog

Average national retail beef sales are usually split between 51 percent food service, which includes restaurants, and 49 percent retail. But currently, most beef is now sold out of retail while a smaller portion is now take-out.

“What I am hearing, as well, is that the grocery stores are upping the price of retail beef that is because the packers are charging them more to purchase it,” Chacón-Reitzel said.

Meat shortages have been a looming prospect for weeks, even while meatpacking facilities have destroyed product due to processing backlog.

The four largest U.S. beef packing companies, Tyson, JBS, National Beef and Cargill, have all had plants with outbreaks.

Some of these facilities are not currently operating at capacity while others have closed due to the virus.

“What I think you might be seeing in terms of prices in the retail meat case are the result of some of this bottleneck in the processing industry,” Chacón-Reitzel said.

Purchasing beef “on the hoof” directly from producers could also cause a backlog for custom meat processors.

In 2017, only 3,700 cattle were slaughtered in certified New Mexico meat processing facilities. That number went up slightly in 2018 to 4,200 locally slaughtered cattle.

“They only have so many people working in the plants and if they have a lot of cattle that they need to harvest, they are going to be backed up,” Chacón-Reitzel said.

“If a lot of consumers are buying beef from producers and all of these custom plants are working at capacity, there’s a bottleneck there and people that are trying to get their beef harvested are just going to have to wait in line.”