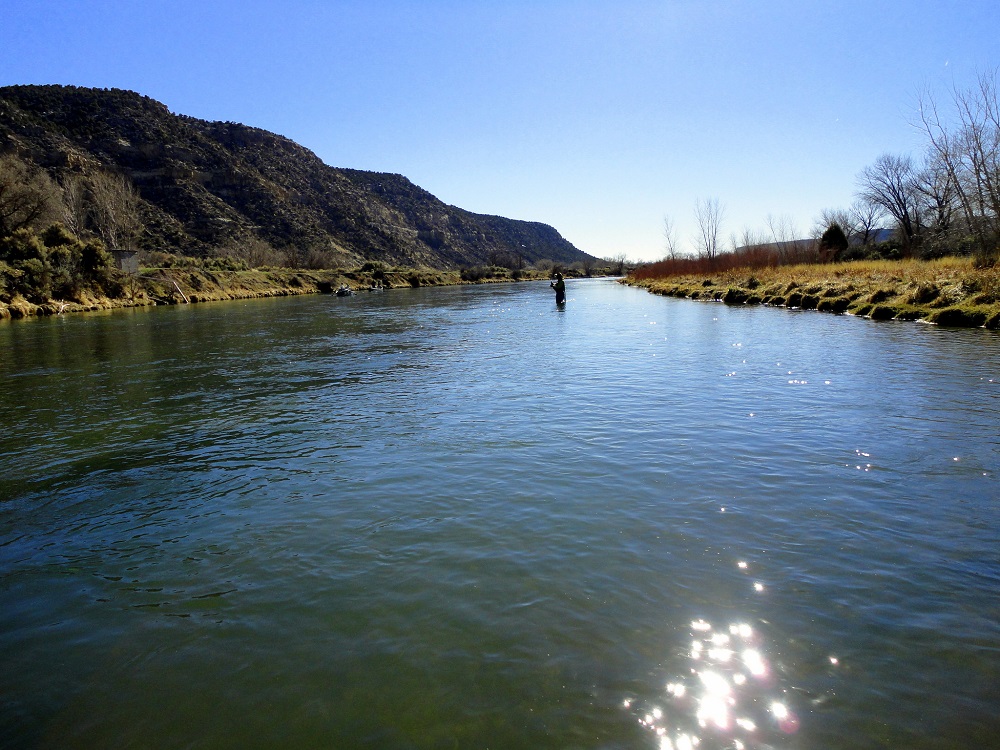 A recent lawsuit seeks to overturn a 2017 Game Commission rule that allows landowners to restrict access to waterways.

A stream access dispute that has been brewing for years between public access advocates and landowners could be resolved once and for all, now that litigation has brought the matter to the New Mexico Supreme Court.

In March, three conservation and public access organizations, the New Mexico Wildlife Federation, Backcountry Hunters and Anglers (BHA), and Adobe Whitewater Club, filed a lawsuit against the governor and the state Game Commission. While it’s hard to boil the issue down into a few lines, balancing the rights of landowners with those of the public is an integral component of the lawsuit, which asks the Supreme Court to strike down a 2017 state Department of Game and Fish rule that enabled landowners to restrict access to streambeds and banks that line waterways located on private property.

That rule was the result of a 2015 bill that became law, codifying thirty years of Game and Fish regulations that considered members of the public from walking onto private property from public waterways as trespassing.

The state Supreme Court took up the case at the end of March, and by mid-April, a contingent of landowners and other groups, including the New Mexico Council of Outfitters and Guides (NMCOG), requested to intervene in the case in support of the 2017 Game and Fish rule, arguing that they would be negatively impacted by a potential Supreme Court ruling striking it down.

Groups on both sides of the dispute all have different ideas about what’s at issue, and what’s at stake, but all parties are quick to point out the dispute is incredibly complicated. And while there’s no shortage of opinions on the topic, stakeholders on both sides of the fence seem to agree on one thing: it was a 2014 opinion issued by then-Attorney General Gary King that started the whole thing.

The New Mexico constitution states that “unappropriated water of every natural stream, perennial or torrential,” within the state of New Mexico, is “declared to belong to the public and to be subject to appropriation for beneficial use, in accordance with the laws of the state.”

Everyone agrees that the waters of New Mexico are public, Kerrie Romero, executive director of NMCOG, told NM Political Report. What’s in dispute is how the public can access those waters. NMCOG is one of the intervenors in the Supreme Court case.

“For at least thirty years, the New Mexico Department of Game and Fish had a regulation that said if you are going to fish on waters where there is private land on both sides, you need the written permission of the landowner,” Romero said.

In 2014, Attorney General Gary King issued a nonbinding legal opinion that appeared to contradict decades of policy at Game and Fish. While King agreed that individuals may not trespass on private land to gain access to the waterway, he determined that “walking, wading or standing in a stream bed is not trespassing.”

Many people on both sides of the issue felt the opinion came out of left field.

“It was a surprise to everyone. There were a lot of people in New Mexico who were floored,” said Joel Gay, head of the New Mexico chapter of BHA, which is a plaintiff in the lawsuit. “I grew up in New Mexico fishing, and that’s always the way it was. You were trespassing if you were in a stream, say, in the National Forest, and you walked upstream or downstream and you came to a piece of private property. Usually there’d be barbed wire across the stream, telling you that you were trespassing.”

The King opinion prompted NMCOG and other landowners to push for legislation enshrining the Game and Fish policy into law.

“NMCOG and a group of landowners ran legislation to codify the Department of Game and Fish rule,” Romero said. “No one was confused at that point. If you want to access water on private property, you need the written permission of the landowner.”

Navigability and the 2017 Game Commission rule

The 2015 statute directed Game and Fish to establish a rule in order to uphold the law and enforce it. In 2017, the Game Commission under then-Gov. Susana Martinez established a mechanism by which landowners could apply to have portions of waterways on their lands be certified “non-navigable” at the time of statehood and thereby recognizing the streambeds as “closed to access without written permission from the landowner.”

Navigability is a key caveat to public access to water, Romero said, because the state’s constitution defines the public’s right to access waters as including torrential streams.

NM Political Report reached out to the Department of Game and Fish for clarification on the definition on navigable and non-navigable, and how those terms were being applied to the landowner certification. The department declined to comment, citing the pending litigation.

BHA and other groups felt the 2017 Game Commission rule was overreach, and has ultimately clouded the issue even more.

King’s opinion wasn’t the first time the access to water on private property has been challenged in the state. His opinion pointed to a 1945 case involving Red River Cattle Company, in which the state Supreme Court ruled that the public had the right to fish by boat in a lake that was surrounded by private property.

And while the King opinion conflicted with Game and Fish department policy on the issue, it still has weight, coming from the Attorney General’s office, Gay said.

“The constitution says that all waters belong to the public, but you just assume that, for whatever reason, the Game Department was correct in closing off all these waters. But Gary King said, no, that’s not legal,” he said.

Gay also pointed to statements released by the current Attorney General Hector Balderas, which Gay believes affirms the conflict between the state’s constitution and the Game and Fish rule.

“We want our state Game Commission to follow the law. It’s simple. We have a constitution, we have a state Supreme Court decision, and we have numerous Attorneys General opinions and memoranda, that all say the current regulations are unconstitutional,” Gay said. “You’ve got this disagreement, what you need is a court to figure out which side is correct. That’s why we are where we are.”

Romero agreed that there is a lot of confusion among the public about what’s legal and what isn’t legal in fishing in streams.

“Trespass on waterways has exploded exponentially, and it’s really because people are confused,” Romero said. “That’s one of the reasons these lawsuits have showed up, there’s so much misinformation flying around, people don’t know what’s going on.”

But private property rights are ultimately at stake, she said.

“The Council of Outfitters and Guides is squarely in the corner with the landowners. We don’t contest that the state constitution says the public owns the water. That’s never been the issue,” Romero said. “The issue is the streambeds, who owns the streambeds.”