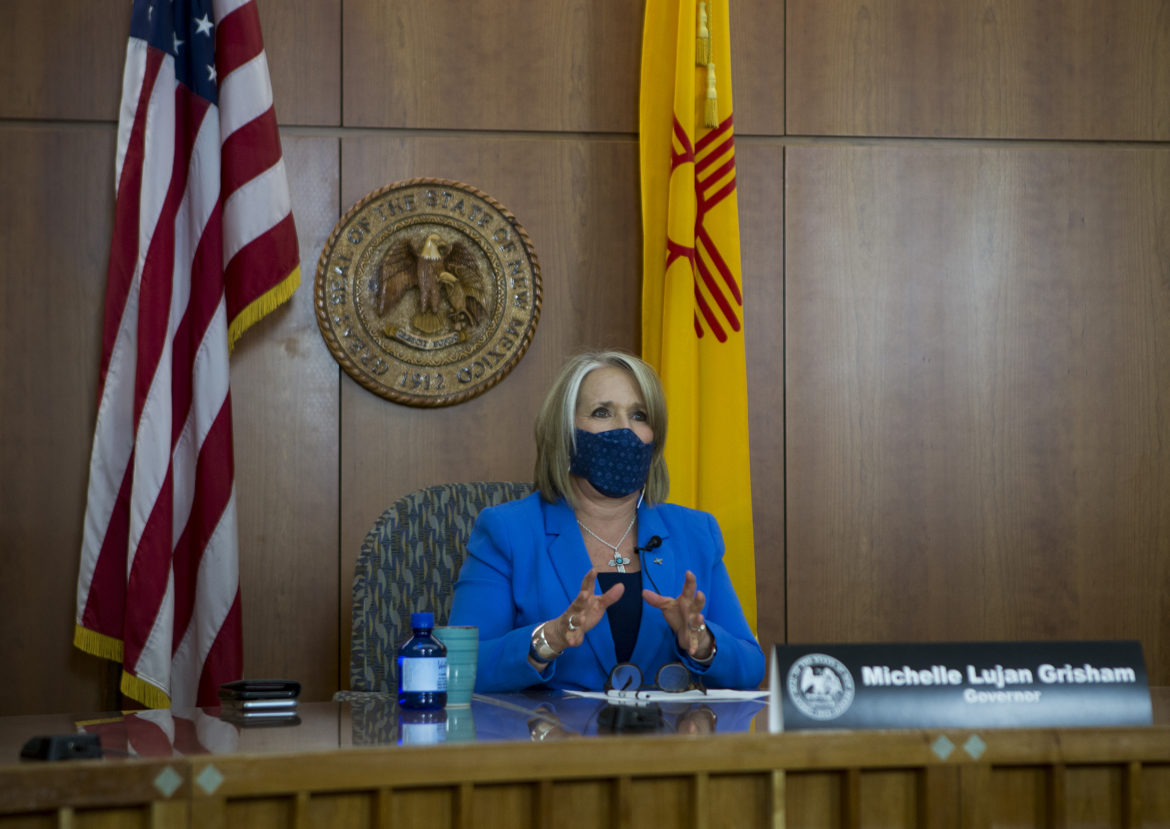 Gov. Michelle Lujan Grisham announced 11 more COVID-19 deaths at a news conference on Friday, May 15. The governor encouraged the public to continue wearing facial masks and practicing social distancing as the state moves into its first steps toward reopening the economy. She said the process will be slow-going, to ensure safety of all New Mexico residents.

During a press conference on Friday, the governor announced tweaks to the public health emergency order that will go into effect tomorrow, including allowing larger crowds at places of worship and all retailers, as most of the state enters “phase one” of reopening.

“We want to slow the spread of COVID-19,” Gov. Michelle Lujan Grisham said.

She also continued to ask the public to wear cloth masks.

The new public health emergency order will go into effect on Saturday, after the current order expires at midnight.

On Wednesday, the governor said the order would have limited in-person attendance at places of worship to 10 percent of fire code capacity and at “big box” retail stores to 20 percent of capacity.

Dr. David Scrase, the secretary of the Human Services Department, said this is not an invitation for everyone to flock to stores.

“When we say that businesses are 25 percent open, we don’t mean that 100 percent of the population should frequent those businesses.”

He said those over the age of 65 and/or those with underlying medical conditions that put them at higher risk for severe disease, as determined by the federal Centers for Disease Control and Prevention, should continue to stay home—and that those who live with someone with one of the conditions should continue to be very careful.

Gyms, salons, indoor malls will still remain closed, while restaurants will still not be able to provide dine-in services. Takeout and delivery are still allowed at restaurants.

The state will also allow non-essential businesses, such as office spaces and call centers, to operate at 25 percent of pre-crisis staffing levels. Like retailers, they must abide by COVID-safe-practices.

The new changes will apply to all counties except Cibola, McKinley and San Juan counties. The northwestern portion of the state will be in the “preparation phase,” the phase in which the rest of the state was in from May 1 to May 15.

Lujan Grisham said many places of worship will continue to provide their services online until they feel it is more safe.

But those that wish to open “can decide how they do services” under the guidelines, which include requiring COVID-safe practices like wearing masks, she said.

The order requires all those in public spaces to wear masks unless a healthcare provider instructs otherwise.

The governor noted that the mask requirement was not popular among many, and compared it to other public health requirements that were not initially popular, including requirements for wearing seat belts, airbags and booster seats in cars.

“We know in fact that they save lives,” she said of those and masks during the pandemic.

“If you could try to make it practicable and not political, these are not political statements,” she said. “This is about mitigating spread, mitigating risk. It’s about saving lives.”

State police would be empowered to write a citation, but Lujan Grisham said she hoped instead for the promotion of positive behavior. Similarly, she said businesses with workers who do not practice COVID-safe practices, including wearing masks, would be violating the public health order.

“No one can go anywhere right now without shirts, shoes,” Lujan Grisham said. “You can’t get service. Businesses need to set that standard.”

The CDC recommended wearing cloth masks and face coverings over a month ago.

To encourage the use of masks, the state announced the “New Mexico Mask Madness Tournament.”

A press release said the competition is an effort to highlight “the creativity and artistic ability of New Mexicans.”

The winner will receive an as-yet undetermined prize.

Visitors will be required to wear masks.

“We need you to help me make those efforts as safe as possible for state workers that will be working there and for yourself and your families,” Lujan Grisham said.

The state will also open the Motor Vehicle Department for some in-person visits for transactions that can’t take place online, but only by appointment.

Lujan Grisham said MVD offices would maintain COVID-safe practices and that customers would be required to wear masks.

Short-term rentals, which include places like AirBnB, can again accept lodgers, but only those from New Mexico. The previous order allowed rentals only for health care professionals or long-term renters.

Summer youth programs are also able to operate, but only under COVID-Safe practices, which include a 5:1 child to adult ratio and only with activities that allow for six-foot distancing.