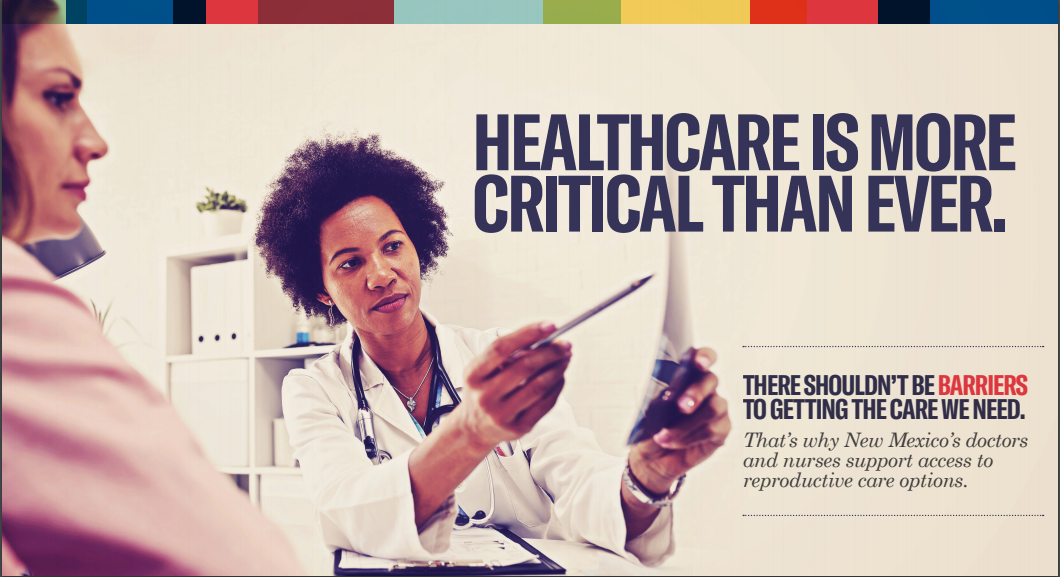 The front of a mailer sent by the American Civil Liberties Union.

Two progressive Democrats, Siah Correa Hemphill and Pam Cordova, who are challenging  incumbents who lean more to the right within the Democratic party, are getting a boost in their campaign efforts.

Correa Hemphill is running against incumbent Democratic state Sen. Gabriel Ramos. With her May filing report, she has outraised Ramos by $53.26. Ramos, who was appointed by Gov. Michelle Lujan Grisham to replace Lt. Gov. Howie Morales, is running his first election for the seat.

The American Civil Liberties Union of New Mexico is spending $150,000 in the remaining weeks of the primary to educate voters on the fact that Ramos and state Sen. Clemente Sanchez, also a Democrat, both voted against HB 51 in 2019. The bill, supported by Gov. Michelle Lujan Grisham, would have repealed a 1969 ban on abortion. Eight Democrats in the state senate sided with Republicans and voted the measure down. Ellie Rushforth, reproductive rights attorney with ACLU-NM, said the nonprofit organization expects to reach 25,000 voters with their efforts.

One of those eight Democrats, Sen. Carlos Cisneros of Questa, has since passed away. His replacement, Bobby Gonzalez, was previously in the House, where he voted for HB 51.

The other seven are up for reelection and all seven face progressive challengers, in some cases, for the first time in years. Senator Mary Kay Papen, who represents mostly Doña Ana County in senate District 38, is facing a primary challenger for the first time since 2000, which is the first year she ran.

Now the ACLU-NM is working to educate voters in the June 2 primary race that Ramos and Sanchez voted against HB 51.

Rushforth said the money will be spent on digital ads, mailers as well as phone banking and texting in the districts Sanchez and Ramos represent. She said ACLU-NM does not endorse candidates. The money is intended to educate on the issue, she said.

Last week U.S. Sen. Martin Heinrich invited the public to learn about the two candidates through a live presentation on Facebook, which also raised funds for the two candidates. Heinrich has endorsed both Correa Hemphill and Cordova, calling them leaders and advocates for their respective communities.

With her most recent campaign finance filing, Correa Hemphill has brought in $83,738.70. This included $5,000 from Heinrich’s Lobo Pac, $1,000 from the Committee to Elect Deb Haaland and $5,000 from Emily’s List, a political action committee that supports women candidates who stand for reproductive rights. But the vast majority of Correa Hemphill’s funds have come from small donations from Silver City residents. Senate District 28 comprises portions of Grant, Catron and Socorro counties.

Ramos has raised $83,685.44, putting the two neck-and-neck going into the final weeks of the campaign for primary voters. Much of Ramos’ fundraising has come from the oil and gas industry with $5,000 from Chevron Policy, Government and Public Relations, based in Albuquerque, and $4,000 from Yeso Energy out of Roswell. The American Federation of Teachers Union, based in Washington D.C., donated $2,000 and Sapien for Senate PAC gave $5,000, Michael Padilla for State Senator gave $1,000 and the Committee to Elect Patricio Ruiloba gave $1,000. The Santa Clara Pueblo gave $500 and the pueblo Ohkey Owingey gave $1,000. Ramos chairs the Senate Indian and Cultural Affairs Committee.

Cordova has raised $86,066, according to her April and May filing reports. She has received some large donations from unions – the International Union of Operating Engineers, based out of Washington DC, has given two $5,000 checks, one for the general campaign. The Sheet Metal Workers’ International Association, based out of Los Lunas, donated $1,000 and the International Brotherhood of Electrical Workers in Albuquerque gave $5,000. Heinrich donated $5,000 through his Lobo PAC, U.S. Rep. Deb Haaland gave $1,250 and Emily’s List provided $5,000 in support.

But Sanchez started April with an opening balance of $163,897.52 and reported a closing balance of $205,224.44 in early May. Sanchez’s support has come from pharmaceutical companies, healthcare companies, railroads, associations representing bankers, beverage companies and oil and gas companies such as Devon Energy Production Company, out of Oklahoma City. It gave $5,000 and the tribe, Ohkay Owingeh, gave $1,000 as did state Sen. Peter Wirth. The American Federation of Teachers Union PAC out of Albuquerque gave Sanchez $2,000 and the Santa Clara Pueblo gave $500. Sanchez chairs the Senate Corporations and Transportations Committee.

Rushforth acknowledged that because of the pandemic, candidates are now in uncharted territory. But, she said reproductive freedom and healthcare are still “priority issues for folks.”

“Reproductive justice is healthcare justice, it’s economic justice. If people can’t get access to the healthcare they need, it adds another challenge in an already challenging time,” she said.