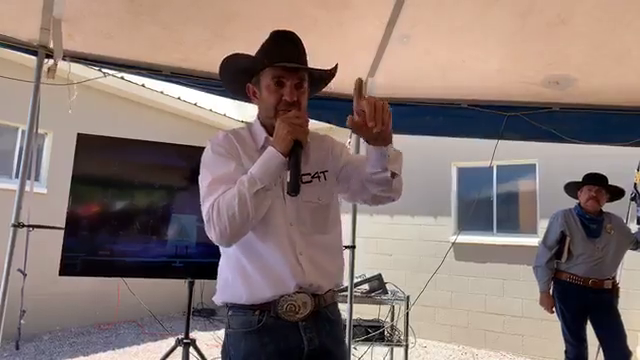 Screenshot of a Cowboys for Trump video

An Otero County Commissioner and leader of a group that supports President Donald Trump is facing calls to resign over his declaration that “the only good Democrat is a dead Democrat.”

The commissioner, Couy Griffin, made the remarks this weekend at a protest in Truth or Consequences where a number of elected officials and candidates for office spoke against restrictions imposed by the state to slow the spread of COVID-19. The protest came after a church in Truth or Consequences received a cease and desist for holding services despite the state’s public health emergency order that, at the time, banned in-person services. Churches can now hold in-person services with 25 percent capacity.

Griffin quickly followed his comment, which was met by cheers from those in attendance according to a video posted by his organization ‘Cowboys for Trump,’ by saying he meant a political death, not a physical death.

“We need to have, I say the reason why the only good Democrat’s a dead Democrat, I’m saying politically speaking, and I’m saying it because we need to have majorities in the House and Senate,” Griffin said.

“There is no place for this kind of violent partisanship today, calling for death of people in the other party,” Lt. Gov. Howie Morales said in a statement.

“Comments inciting violence have absolutely no place in public discourse, and Commissioner Griffin should resign his position immediately,” Democratic Party of New Mexico chair Marg Elliston said in a statement Tuesday morning. “It is also incumbent upon every single Republican holding or running for elected office in New Mexico to strongly denounce his comments and join our call for his resignation. This should not be a partisan issue, it is about protecting all New Mexicans, regardless of their political beliefs.”

The Young Republicans of New Mexico called on Griffin to apologize.

Wednesday morning, Griffin appeared defiant on the Cowboys for Trump Facebook page, responding to a story on KOB-TV.

“This is the pathetic wasteland that the Democrats have resorted to,” Griffin wrote. “I am sorry if I spoke in opposition to a political party which includes murdering babies and one that can’t tell the difference between a woman and a man. The liberal progressive agenda needs to die.”

Griffin told multiple outlets that he would not resign and told the Albuquerque Journal that he didn’t believe he did anything wrong.

This isn’t the first time Griffin has found himself in hot water. The State Auditor said reimbursement for travel Griffin made to Washington D.C. may have violated state law. Griffin received a reimbursement of over $3,200, which included hauling a horse trailer to the nation’s capital, which he returned.

Cowboys for Trump entered arbitration with the Secretary of State earlier this year after the state’s top election official said the organization needed to register as a political organization.

When closing his short speech, Griffin said that a “plan B” after the “plan A” of the ballot box would be “our county sheriffs…our 2nd Amendment Sanctuary resolutions.”

Note: Added a comment from the Republican Party of New Mexico.

View all Cowboys for Trump articles →