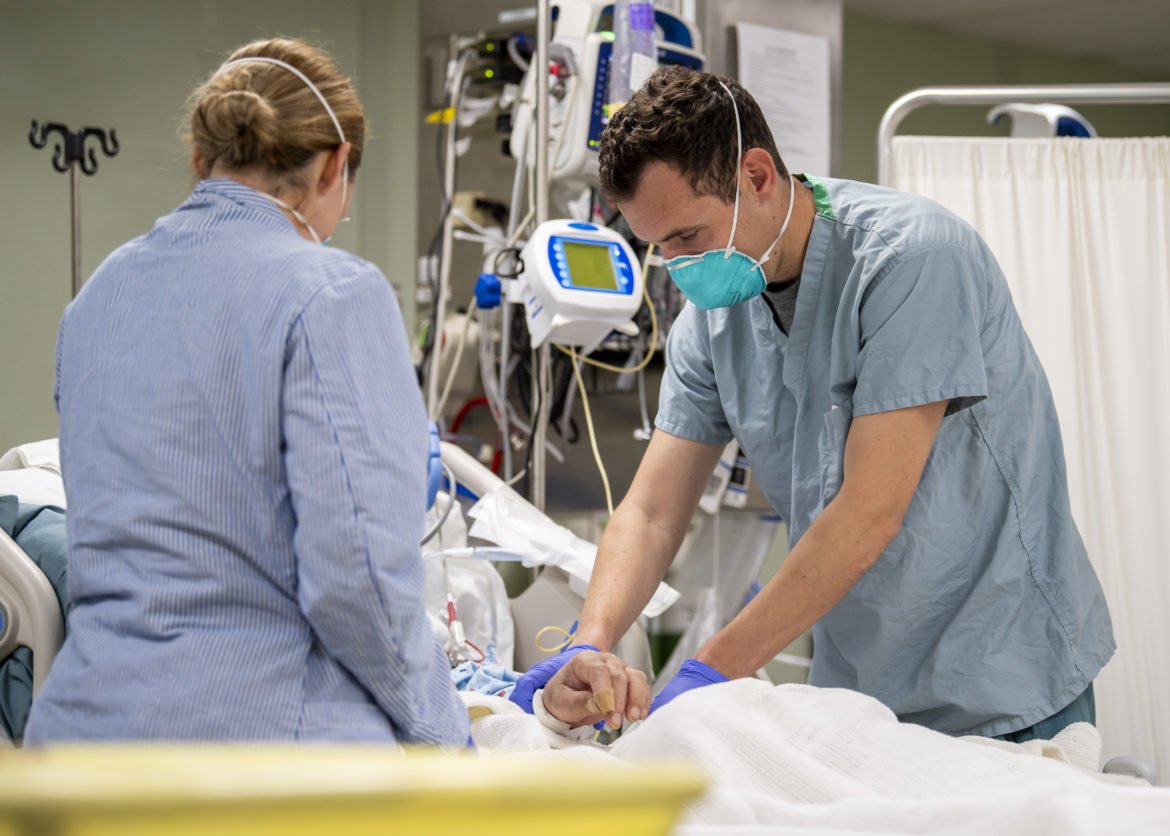 New Mexico is one of two states – the other is New York – that meets the gating criteria set by the White House for reopening, according to a group of public health and crisis experts.

A website called covidexitstrategy.org is mapping the state-by-state response to reopening and, according to the map, only New Mexico and New York meet the gating criteria established by the U.S. Centers for Disease Control and Prevention. The organization is made up of public health and crisis experts who are nonpartisan and worked at the federal level during the Ebola epidemic in West Africa, according to the site.

The criteria include things like the number of ICU beds available and the downward trajectory of documented cases within a 14-day period. Dr. David Scrase, New Mexico’s secretary of the Health and Human Services Department, talked about the map and New Mexico’s criteria for reopening during a town hall meeting broadcast live through social media Wednesday along with Dr. Richard Larson, vice chancellor for research with the University of New Mexico Health Science. House Speaker Brian Egolf, a Democrat from Santa Fe, hosted the event to allow media and the public to ask scientific questions about COVID-19, a respiratory illness that is a type of coronavirus.

New Mexico, as is true of every other state, established its own criteria for opening. Scrase reviewed the state’s criteria and where the state is in meeting that criteria in order to lift restrictions.

Other criteria the state is using includes the number of testing per day. Scrase said the state wants to achieve 5,000 tests per day and, currently, the state is just below that at 4,931 tests, he said. But the national standard is 3,300 per day, he said. New Mexico is one of the highest states per capita for testing, Scrase said.

The other state criteria are contact tracing and isolation, which Scrase said “we’re doing well on.” The final criteria for the state is the capacity of the healthcare system. Currently, the health care system in the state has been able to stay ahead of the disease and not be overwhelmed, he said.

Scrase said New Mexico reached its disease peak on May 1 and has been slowly coming down except in the southwest region, where cases are going up. He said cell phone monitoring data, which only shows trends in movement, not individual behavior, is “going up again.” The numbers of people applying for Medicaid, SNAP (Supplemental Nutrition Assistance Program) and other programs providing aid have gone up in the state.

Scrase said that nationally, three percent of the COVID-19 test positive cases are children, but in New Mexico, the rate is 12.7 percent, which is four times higher than the national average.

Some children who have tested positive for COVID-19 have developed a secondary illness called Kawasaki syndrome, which is inflammation in the lining of the blood vessels and has the potential to be lethal. About 200 to 300 children have reported Kawasaki syndrome but there have been no known cases of it in the state.

“It can be serious for a small percentage of kids,” Scrase said.

Some who test positive for COVID-19 can also develop blood clots, which can lead to stroke. Larson said it’s unknown what role an underlying condition could be playing for those who suffer a stroke. Scrase said that for people who test positive, there is a tendency for blood clots to develop in their legs.

Those patients are put on blood thinners, Scrase said.

Larson said the scientific community will likely know in a few months if developing COVID-19 antibodies will protect people who have tested positive once from testing positive again.

There have been some reports of some antibody tests not being reliable but Larson said early antibody testing came from other countries and were not tested in labs certified by a certain U.S. standard and FDA approved.

Being outside or being indoors with good airflow won’t prevent the spread entirely, but it can lower the risk. Scrase said that if 80 percent of the population wore a cloth mask, the death rate in New Mexico would be lowered by 1,700 people. A cloth mask is more about unwittingly spreading the disease to others than about protecting the wearer from COVID-19. But wearing a plastic shield over the face is “more likely to help,” prevent the wearer from catching the disease from others because it protects the eye, Larson said.

Scrase said it’s “not a bad idea,” to wipe surfaces down that come into the house but he said wearing gloves could be “less helpful.” He said that if a person doesn’t know the proper way to remove gloves, the person wearing them could inadvertently shoot the virus into their respiratory system and eyes when removing the gloves.

The drug remdesivir is available and started arriving in the state earlier in May, Larson said. But it is reserved for the more severe cases of the disease. It speeds up recovery by four days and reduces mortality, Larson said.

Scrase said a vaccine is about a year away and health care workers would likely be the first to be vaccinated. Larson warned that the fall could be difficult because patients will also start presenting with flu and the symptoms for both diseases can be very similar. The outcomes, however, are not.

Given the numbers of known cases and death rates, New Mexico mortality is 20 times higher for COVID-19 than for influenza, Scrase said.