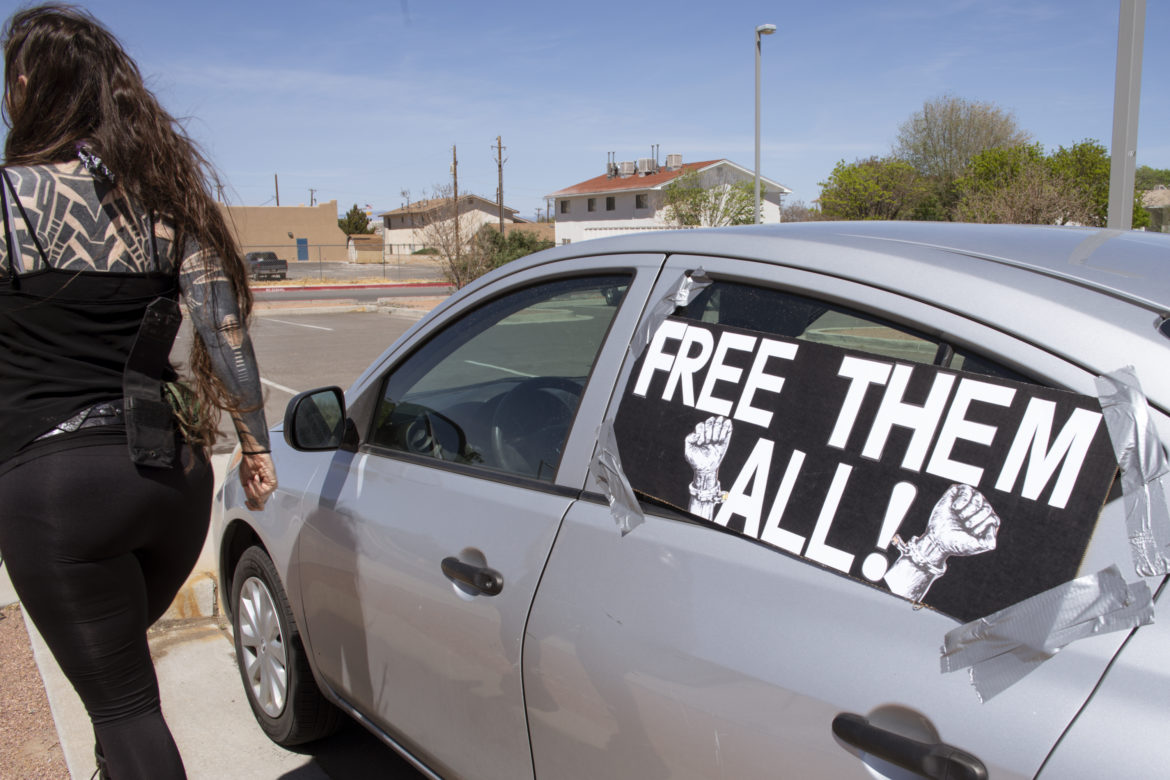 A woman walks away from her car as she prepares to participate in a demonstration, organized by Millions for Prisoners, calling for the release of incarcerated people because of the danger of contracting COVID-19 infections in the prison's tight quarters.

ALBUQUERQUE — At least 25 residents of one of New Mexico’s largest halfway houses have tested positive for COVID-19.

The outbreak happened at Diersen Charities in Albuquerque, which houses inmates on their way out of the federal prison system and some who are on federal probation. The facility has enough beds to accommodate more than 100 men and women.

“We’re sitting ducks,” said one resident, who declined to give his name for fear of retaliation.

He described a living situation not unlike a prison, with dozens of metal-frame bunk beds stacked a few feet apart. He said he and his roommates shared toilets, sinks, showers and laundry machines — all potential routes for viral spread.

People living in close quarters are at particularly high risk for spreading the novel coronavirus; outbreaks have occurred in jails and prisons around the country. As a preventive measure, many states have sought to reduce the number of inmates confined in prisons and jails. Since April 6, the New Mexico Corrections Department itself has released 46 inmates under a state executive order, according to the NMCD.

At least 205 inmates in New Mexico have tested positive for COVID-19, and the state updates the numbers daily, breaking them down by facility in joint press releases issued by the governor’s office and the Department of Health. The press releases also list “congregate living and acute care facilities,” such as nursing homes and halfway houses, that have had at least one recent case of the coronavirus.

But they have made no public mention of the outbreak at Diersen, despite the fact that the information circulated within the state’s legal community last week, according to email correspondence obtained by Searchlight New Mexico.

The email thread, dated May 21, began with a message from Ron Travers, deputy chief of the U.S. probation office for the district of New Mexico.

“We received word that all the results are in. 27 residents tested positive,” Travers wrote. “All Diersen staff were negative.” Individuals who tested positive, he added, “have been or will be moved to a quarantine hotel.”

Travers declined to comment further when contacted by Searchlight.

“There is no way social distancing can be done in here,” said one Diersen resident.

Like all the residents contacted by Searchlight, he asked for anonymity and expressed frustration with how the facility handled the outbreak. He and the others were provided with masks, but that didn’t allay his concerns. “It’s an open facility,” he said. “We’re sleeping three feet away from each other.”

The Department of Health became aware of a COVID-19 outbreak at Diersen on May 15, according to spokesperson David Morgan, who said that staff and residents were tested over the next four days, with 26 residents testing positive. (The U.S. Bureau of Prisons gave the number as 25.)

Morgan said that the DOH is working with the facility to isolate cases, quarantine contacts, clean the facility and continue testing to identify additional cases. Everyone at the facility was tested May 26, he said. As of press time, he said he was awaiting clarification about why the outbreak hadn’t been acknowledged.

Albuquerque officials were also aware of the situation and neglected to alert the public. Maia Rodriguez, a spokesperson for the city’s emergency operations center, said it was not the city’s responsibility to do so.

“If this were to be publicized it would need to be done so by Diersen Charities as they are the primary agency and a private facility,” Rodriguez said.

Diersen Charities did not respond to a request for comment. It is part of a nonprofit organization called Dismas Charities, whose website lists 36 facilities around the country, including the halfway house in Albuquerque and another in Las Cruces.

At least 224 individuals living in federally contracted halfway houses have tested positive for or recovered from COVID-19 as of May 26, according to data from the U.S. Bureau of Prisons. Forty-five of those live at Dismas Charities locations.