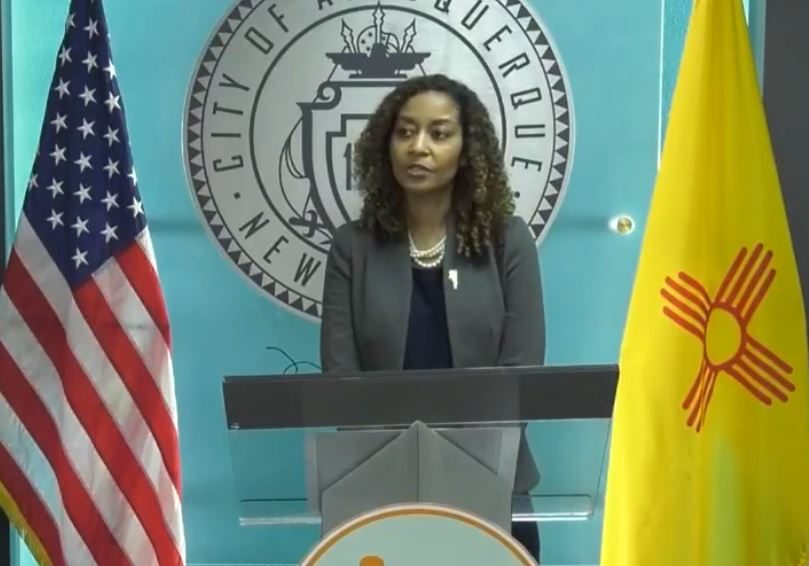 Torri Jacobus, Head of the Office of Civil Rights for the City of Albuquerque, speaking at a press conference. Jacobus urged residents to "seek out opportunities to do the anti-racism work in Albuquerque and across the country."

Albuquerque Mayor Tim Keller and other city officials took to the podium Friday afternoon to discuss the May 25 death of unarmed black man George Floyd at the hands of a police officer in Minneapolis and a Black Lives Matter protest that occurred in response to Floyd’s death Thursday night in Albuquerque.

On Friday, fired Minneapolis police officer Derek Chauvin was arrested and charged with third-degree murder and manslaughter in the death of Floyd, who was killed while handcuffed and unarmed by Chauvin in an altercation that allegedly began over an alleged fake $20 bill. Chauvin knelt with his knee on Floyd’s neck for about eight minutes, even after Floyd stopped responding.  Three other officers involved were also fired from the Minneapolis Police Department earlier this week.

“[George Floyd’s] death has left us, in many ways, with rightful anger and grief. It has highlighted a lot of things wrong with America. It’s also a situation where we know it’s not the first time. Just a few weeks ago, we saw the video of Ahmaud Arbery — the same thing, different context, happening time and time again,” Keller said. “I want to acknowledge that pain, the pain that people are feeling and the grief they’re going through. Here in Albuquerque, we stand with those who are grieving these incidents around the nation. We also stand with those calling for justice.”

Arbery was killed in February in Georgia while out for a jog in broad daylight by a group of armed white men, one of whom was a former law enforcement officer. The three white men are charged with aggravated assault, felony murder, and criminal attempt to commit false imprisonment. The U.S. Department of Justice is investigating the shooting as a hate crime.

The three were only charged after video of the killing was leaked online and prompted outrage nationwide.

Hate incidents also have occurred recently in Albuquerque, Keller said, pointing to a racist attack at the University of New Mexico that included a lynching threat directed toward Charles Becknell Jr., director of the Africana Studies program at UNM.

“Dr. Becknell is an example of why we cannot be silent in our city about these issues. It means that we have to work together to dismantle racism as best as we can. And it means also that to be silent is complicit,” Keller said. “We are standing in solidarity with the African-American community, grieving the reoccurring violence against their community,” he said.

Floyd’s death sparked a series of protests against racist killings at the hands of law enforcement across the country. Protests last night in Albuquerque ended with Albuquerque Police Department officers firing tear gas into a small group of 50 protestors, after reports of a dozen shots being fired in the area.

Keller said APD officers responded appropriately to the situation, and added that APD Chief Mike Geier condemned the actions of the Minneapolis police in a separate earlier briefing.

APD is under a consent decree with the U.S. Department of Justice for a history of unconstitutional policing, including the use of excessive force, including fatal shootings.

“George Floyd, Ahmaud Arbery, Breonna Taylor, Christian Cooper. So much hatred and so much racism, just in the last few weeks in our country,” Jacobus said. “This has created a volatile situation that took very little to spark.”

Jacobus was referring to the several black Americans who have made national news in recent weeks as victims of racist attacks.

Breonna Taylor was shot eight times by police in Louisville, Kentucky in March, after the plainclothes officers executed a “no knock” search warrant. The FBI is investigating the incident, but no police officers involved have been fired.

Christian Cooper is the black man who was bird watching in Central Park when a white woman called the police and claimed he was threatening her.

“We know that this is a long-standing problem in our country, and that local government has played a role in the past in maintaining structural racism. That’s why I’m here, that’s why Mayor Keller created the Office of Equity and Inclusion in 2018, so that we can help the rest of the city government understand the roots of racism and to dismantle the structures wherever we can,” Jacobus said. “All of us, each and every one of us, has a responsibility to do work to dismantle racism and to heal our community. I ask all of you to seek out opportunities to do the anti-racism work in Albuquerque and across the country. When you see racism, speak up with conviction against it. When you see discrimination, report it to the appropriate government agencies. Here in Albuquerque, that’s the Office of Civil Rights that I lead.”

“To our community, I see your pain, I feel your anger, I hear you. We are in this together,” Jacobus said.