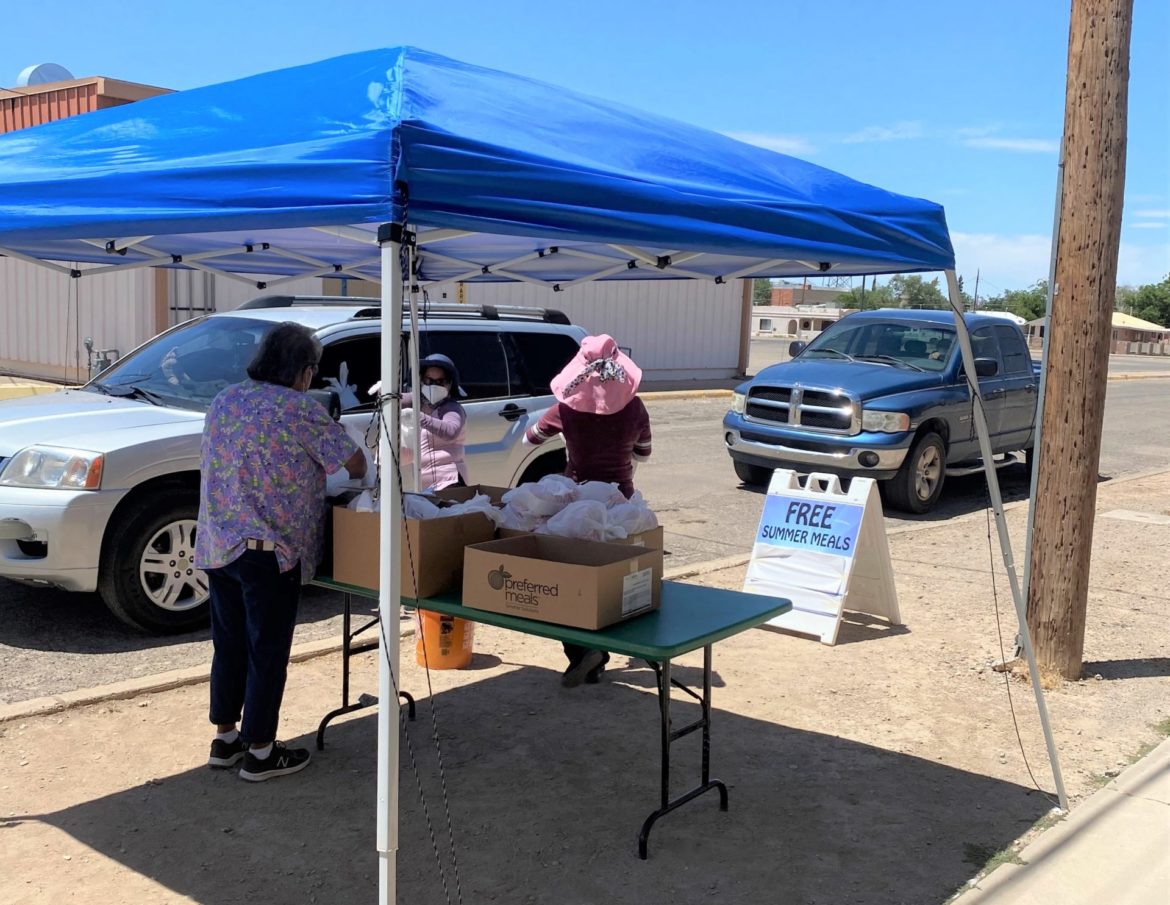 Alamogordo Public Schools volunteers hand out bagged meals to the families of students in need through the district’s grab and go feeding program.

Since schools in New Mexico closed due to COVID-19 in March, food service workers across the state have continued serving meals to students in need, and their families.

While the food helps feed hungry students, particularly those who no longer have access to free or reduced meal programs at schools, food service workers in these programs may be at greater risk of catching the virus.

Two meal distribution sites within Gadsden Independent School District based in Chaparral, NM closed in May due to possible COVID-19 exposure.

There were 236 cases of the virus reported as of June 1 in Chaparral, between Otero and Doña Ana Counties, according to the New Mexico Department of Health.

Two kitchens at North Valley and Vado Elementary Schools, where potentially infected employees had been working as of May 19, were closed and 20 employees within the GISD student nutrition program were placed in quarantine due to self-reporting possible exposure.

“Those schools kitchen facilities and high contact locations have been wiped down by District custodial staff but will not be part of the summer feeding program in the district,” said Luis Villalobos, GISD public relations officer.

“We are starting to have multiple employees report possible exposure to the COVID-19 virus which typically means employees are referred for testing and quarantined until we have the results,” Dempsey wrote.

GISD will begin testing employees in the coming days.

“If we test June 4, we have to allow for those tests to be processed because I don’t want an employee who might test positive to be back at work while the test is being processed. So, we need time for this process to take place,” said Dempsey in a news release.

Thousands of meals have been provided to students through GISD’s student nutrition program since schools closed on March 16, just a week before spring break.

GISD will no longer hand out food in the same way but will offer weekday shelf stable meals and will put together a list of families in need who will then receive direct deliveries of food.

This is in addition to Pandemic EBT meal cards from the USDA that were distributed to all GISD students.

Some meal distribution sites have closed while at other sites, food was prepared and brought over to be distributed to Alamogordo students.

“We kind of divorced the prep from the distribution in some cases,” Tagle said.

The district originally prepared meals for students in every school kitchen but now, the meal distribution program has changed.

“We quickly realized that if somebody goes down or has to be quarantined because a family member is quarantined, it shuts down that operation,” said Colleen Tagle, Deputy for Support Services & Human Resources for Alamogordo Public Schools.

“So, if every kitchen got wiped out we would still be able to feed our students breakfasts and lunches for weeks,” Tagle said.

Food is delivered to rural communities where students can collect meals from their regular bus routes. The district is also working to arrange free voluntary testing for staff and employees.

There were no known infections among Alamogordo food service staff as of Friday, May 29.

“We have combined meals, breakfast and lunch, and the week’s meals given out on Monday, Wednesday and Friday so there is less contact and less having to travel for the parents,” Santa Fe Public Schools Superintendent Veronica Garcia said.

Food service staff also work in shifts, so the same group does not work together every day, and staff wear personal protective equipment.

“So, this is very much on our minds, about keeping our employees safe,” Garcia said.

No SFPS food service workers were laid off due to school closures. There were no known infections among the district’s food service staff as of Friday, May 29.

Las Cruces Public Schools has 19 school sites for its grab and go student feeding program and provides meals to Families and Youth, Inc., a community outreach program, which distributes meals in places like community parks.

Wellness checks are also performed on the district’s nutrition services workers when they report to work.

“They screen for their temperature and that’s logged and anyone who feels any of the symptoms related to COVID-19 are asked to stay home,” LCPS Public Information Officer Kelly Jameson said.

Jameson said the number of workers working at one time has been limited, spacing between workers has increased, and PPE requirements have changed to better protect workers.

LCPS follows U.S. Centers for Disease Control and Prevention  guidelines for sanitation and disinfecting spaces and plans to increase cleaning of school facilities before schools reopen.

Albuquerque Public Schools is operating its regular summer feeding program in partnership with the City of Albuquerque and Bernalillo County, and the district will maintain 10 grab-and-go meal sites serving students breakfast and lunch.

Albuquerque Public Schools Executive Director of Communications Monica Armenta said not all feeding sites remained open after schools closed, so hours for some employees were cut back while other staff worked rotating shifts as needed.

“All employees were paid according to contracts,” Armenta said.

The school district did not comment on whether there were any known infections of the virus among food service staff.

Armenta said safety and sanitation where food is being prepared and served has always been a priority for the school district. In addition to food service workers, all district employees will undergo daily wellness checks.

“Food workers will continue to wear gloves and now face masks will be required as well,” Armenta said.