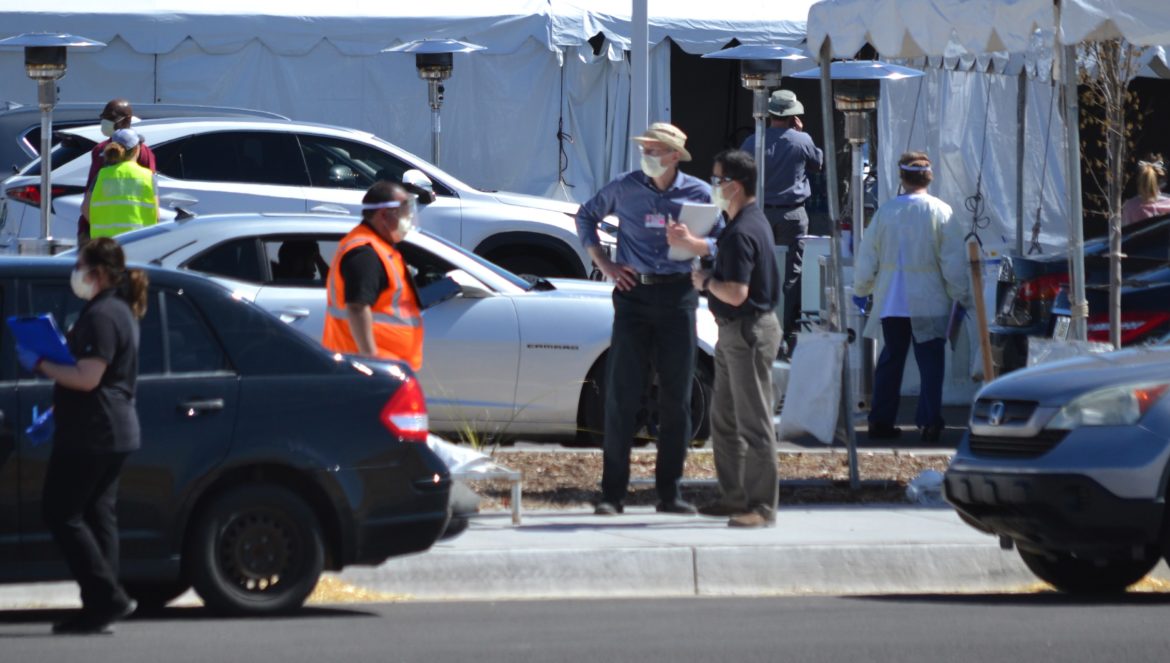 State Human Services Department Secretary Dr. David Scrase offered some data supporting the use of masks and social distancing to help slow the spread of COVID-19.

The use of face masks in public has become a polarizing topic among some communities as the state has loosened its restrictions on businesses, including closures, over the last week.

While cloth masks aren’t suitable for use in healthcare settings, Scrase said they are still useful at preventing the spread of the illness among the general public. A review published in May that analyzed 21 studies found that mask use provided a “significant protective effect,” and reduced the risk of infection significantly, ranging from 80 percent among healthcare workers to 47 percent among the general public.

Research has found cloth masks are not as effective at preventing infection as other types of masks. A separate review that focused specifically on cloth masks recommended policymakers standardize cloth mask materials to ensure the fabric offers high filtration of particles. Another study found that adding a nylon stocking outer layer to cloth face masks increased particle filtration, and brought some mask filtration efficiency above that of the 3M surgical masks.

The World Health Organization recommends that masks be worn tight against the face to minimize gaps, stretching across the nose and below the chin. One study found that face masks are more effective at reducing transmission of viruses that transmit easily among asymptomatic individuals. Some studies suggest as many as 50 percent of individuals with COVID-19 are asymptomatic.

Scrase also warned that people should not become careless just because they’re wearing a mask. He pointed to data indicating that people may feel safer while wearing face masks and become less vigilant about social distancing or hand washing.

“The virus spreads from person to person, so if you’re trading wearing a mask with spending more time with a lot of people, you’re increasing, not decreasing, your risk,” he said.

Scrase also referenced a study that found the risk of transmission of the virus is lower with physical distancing at 1 meter (3 feet), though Scrase emphasized individuals should still stay six feet apart.

Hey, what about Sweden?

Scrase also addressed Sweden’s so-called social experiment in responding to the virus. Sweden did not impose as many restrictions on the population of its largest city Stockholm, in hopes that the community would develop herd immunity. Schools were not closed, for example, nor were bars or retail stores, and no stay-at-home orders were issued.

“I always get this question, ‘Hey, what about Sweden?’” Scrase said. “They were hoping people would develop herd immunity, which means the vast majority of the population would get infected, there wouldn’t be that many deaths, then they would be immune, and wouldn’t have to worry going forward.”

The experiment hasn’t been a resounding success, Scrase said. He pointed to data comparing Sweden to its Scandinavian neighbors. Sweden experienced two and half to three times more cases than its neighbors, and the country saw a much higher mortality rate associated with the illness.

“In Norway and Finland somewhere between 2.8 and 4.7 percent of people who got COVID died. In Sweden, it was much higher, 10.9 percent,” he said.

As for developing herd immunity, Scrase said the country isn’t anywhere near the 70-90 percent threshold of immunity needed.

“After this experience in Stockholm, they did highly reliable antibody testing,” Scrase said. “They had only reached 7.3 percent immunity.”

Scrase commended healthcare workers, state officials and the general public for its response to the pandemic and the subsequent public health orders. The state is now at or below most of its gating criteria for expansion of its reopening.

“We’ve been conservative, we’ve been very, very aggressive about testing, which has enabled us to identify cases and isolate them and contain growth,” he said.

As for contact tracing, the state averages 23 hours between a positive test result and isolation of the individual, just a hair below the gating criteria of 24 hours. But the state still lags in tracing and quarantining each positive cases’ contacts. The state is currently averaging 50 hours, while the gating criteria is for 36 hours or less.

“We’re a little bit further behind than we want to be in contacting all the contacts,” he said. “In the beginning of this epidemic, the average number of contacts was 30. Once you go into a lockdown situation, or a stay-at-home order, the number of contacts drops dramatically.”

He warned that the recent bout of protests may further strain contact tracing personnel, but added that the state is hiring more people to help it lower the time.

The state is doing very well in terms of ICU bed capacity, and is on-track with PPE supplies for the gating criteria. Scrase said the state has not come close to the ICU threshold so far.

“I think this is one of the amazing successes of the medical advising team,” he said, adding that New Mexicans’ social distancing also helped.

“That’s a shout out to everyone in New Mexico who stayed at home and avoided contact with others,” he said. “[We’re] real pleased with our progress.”

But, Scrase said, it’s important for New Mexicans to remain vigilant in preventing the spread of the virus.

“Even though we’re improving and opening up more and more, we want to remain vigilant,” he said. “We want people to stay at home if they’re sick. If there’s one message I would say 50 times: stay home if you’re sick. Wear face coverings, [and do] social distancing. There’s good evidence now on that.”