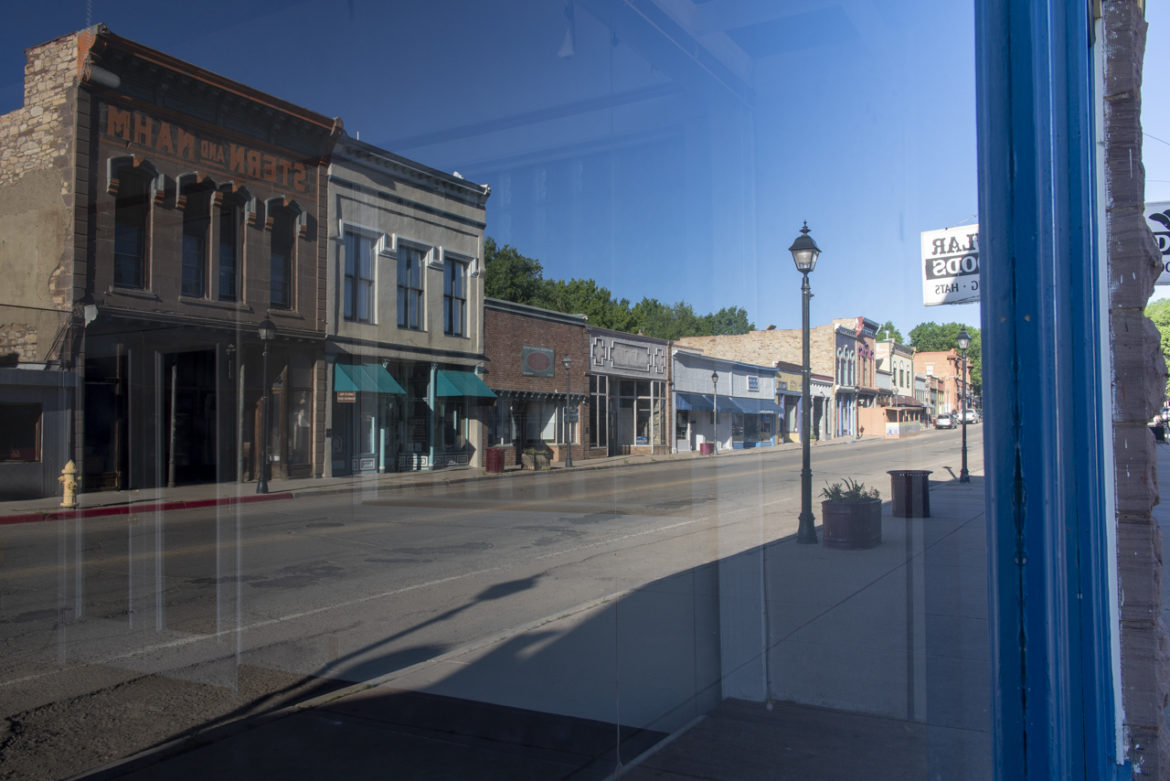 Reflections in shop windows on Bridge Street in Las Vegas.

LAS VEGAS, N.M. — Elmo Baca has always loved historic buildings. He was born in Las Vegas, a Wild West city that’s one of the most historic in New Mexico, home to more than 900 buildings on the National Register of Historic Places. After he graduated with a bachelor’s degree in architecture from Yale University, Baca moved home for the summer, unsure what to do next. An elderly artist who lived in a restored adobe house near the city plaza changed his life with a single sentence. “This town needs you,” she told him.

Baca listened. He studied historic preservation at Columbia University and then spent 30 years working for the state of New Mexico to revitalize downtowns across the state. But his particular love has always been for Las Vegas, with its “storybook, movie-set” buildings.

When Baca retired, he set to work renovating a century-old building he purchased with his father in the ’80s. He transformed the second floor of 146 Bridge Street into his home and turned the first floor into a 51-seat movie house — the Indigo Theater. The picturesque streets of Las Vegas would draw enough tourists to sustain the business, he felt certain. And he wanted to improve the quality of life for locals. Until the Indigo opened in 2015 — with Star Wars: The Force Awakens — residents had to drive 67 miles west to Santa Fe to see a first-run movie.

“One of the most rewarding experiences is when I showed Coco,” Baca said. Generations of families came to watch the animated Day of the Dead movie together. “It was so touching. Some families said, ‘Thank you, Mr. Baca. We’ve never had the whole family at the movies like this.’”

Today, Baca isn’t sure he’ll ever get another Coco. And the history that’s unfolding daily is no friend to him — or to anyone in Las Vegas. The coronavirus has silenced the downtown, erased tourists and dashed many of the city’s hopes of a comeback.

Buildings that underwent million-dollar renovations in recent years to attract tourists were closed for weeks during the COVID-19 shut-down; downtown restaurants that lived on razor-thin margins saw their customers disappear. And businesses that reopened in June saw little traffic.

Baca’s theater has been closed since mid-March, when the state shut down nonessential businesses. “We’re still months away from reopening,” he said in June.

With only 16 positive COVID-19 cases and no reported deaths to date, small-town Las Vegas (population 13,107) and surrounding San Miguel County have dodged the most devastating health impacts of the coronavirus. But they have not been spared its economic devastation. Even before the coronavirus appeared, the city’s poverty rate stood at 35 percent — three times the national average, according to the U.S. Census Bureau.

Las Vegas native Harlan Lyster — former bank robber, now unemployed bulldozer operator — described how he was getting by while standing on the sidewalk outside the Plaza Pharmacy, waiting for a prescription to be filled. Speaking through a bandanna, Lyster said he’s been out of work since New Mexico issued its stay-at-home order in March. He’s been earning a little money selling things he makes out of old horseshoes and railroad spikes in his shop at home, a few miles away.

“Being from Las Vegas, New Mexico, USA, Earth, you got to know how to do everything, or you’re going to starve,” he said.

The arrival of “El Diablo”

History has buffeted Las Vegas many times over the centuries, favoring one population over another, invading it and bedeviling it.

Located near the Sangre de Cristo Mountains, on a fertile plain watered by the Gallinas River, the area saw its first permanent settlement in 1835, built by Mexican colonists. They established a central plaza and small adobe buildings — Old Town — on the west side of the river along the Santa Fe Trail, which delivered a steady stream of traders and travelers.

Old Town’s heyday abruptly ended with the arrival of the railroad in 1879. The Atchison, Topeka and Santa Fe Railroad built its tracks and depot not in Old Town, but on the east side of the river, about a mile from the plaza. The arrival of “El Diablo,” as the locals dubbed the first locomotive, triggered a flurry of development in what was soon an entirely new city — New Town.

What resulted was one of the state’s most infamous racial divides. Old Town, later named West Las Vegas, remained almost entirely Hispanic; New Town, or East Las Vegas, was Anglo. The segregation would ease in the coming decades, but the two cities would remain separate for the next 90 years, complete with separate fire and police departments, schools and municipal governments.

The trains brought other turmoil, too. As the railroad arrived, so did outlaws, scoundrels, swindlers and murderers. Jesse James and Billy the Kid were among the visitors. Doc Holliday had a dental office in town. For a time, vigilantes dragged inmates out of jail and hanged them at a windmill in the town’s now tranquil plaza.

Order was eventually restored, but by the 1900s, Las Vegas was losing ground on other fronts. The rise of automobiles, the birth of the Interstate Highway system in the 1950s and the decline of the railroads battered the economies in railroad towns like Las Vegas, where many historic structures were shuttered.

The building’s old-time facades made them popular in Hollywood: Hit movies and TV shows were filmed in town, from Easy Rider and No Country for Old Men to Longmire.

But by this time, the populace had a baked-in wariness of strangers coming to town, whether industrial or human. Revitalization efforts haven’t always been popular.

“Some people are flat out against tourism,” Baca said. “They don’t want gentrification.”

For three months after becoming the editor of the twice-weekly Las Vegas Optic last year, Phil Scherer, 24, received letters calling him a cockroach and telling him to move back to Missouri. Las Vegas locals are “not super accepting of people from the outside,” he said.

The expense of running two small municipalities on either side of a waterway began to look less and less practical. In 1970, the two Las Vegases unified into one, but, Baca said, “racial tensions continued to fester. The Chicano movement had demonstrations and sit-ins on the campus of New Mexico Highlands University in the late 1970s, protesting hiring policies [most hires were Anglo] and faculty and curriculum choices.”

Lyster knows the history well. His grandfather served as the city’s mayor from 1972 to 1974. And he embodies both sides of the divide. His dad played football at Robertson High School in New Town; his mom was a cheerleader at West Las Vegas High School in Old Town. It left Lyster in the middle. “I’m half white and half Mexican,” he said. “I fit into both and neither.”

He attended each high school briefly before dropping out in 1983 at the age of 14 and leaving town as soon as he could. For the next 30 years, he drove a semi-truck, laid flooring, ran heavy equipment, framed and roofed houses, dug ditches, and was an extra in movies, among other jobs. He moved from state to state.

An imposing 6-foot-5, Lyster said he’s been trying to escape Las Vegas his whole life, but “it’s like a magnet: it’s always drawing me back.” For a while he wound up in federal prison, doing time for a 1994 bank robbery in Albuquerque.

He said he hadn’t been particularly interested in bank robbery, but a guy he worked with pointed a gun at him and said, “We’re going to rob that bank.” So they did. They got away with $11,220 and Lyster was arrested a few days later. He met his wife Angie, also a Las Vegas native, through letters she sent him when he was in lockup. They’ve been married now for almost 10 years.

Where the jobs aren’t

Lyster is eager to get back to work, as are thousands of other unemployed people in the state. San Miguel County has been particularly hard hit: It experienced a huge jump in new unemployment claims, from 13 to 252 — a more than 1,800 percent increase in claims between March 14 and March 28, according to the New Mexico Department of Workforce Solutions.

But many jobs have been shed in small businesses, restaurants, bars, motels and hotels.

The Castañeda Hotel, lovingly refurbished and reopened in 2019, was intended to be a centerpiece of an economic renaissance, with 20 rooms overlooking the historic railroad. Owner Allan Affeldt spent $5 million to rehabilitate the 1898 structure. The state’s shutdown orders closed it from mid-March to May 18; today, it is operating at 50 percent capacity, as allowed by the state.

Trujillo, Las Vegas’ brand-new mayor, has been painfully aware of the toll. Sworn in on April 1, in the middle of the pandemic, he watched as a number of local businesses closed permanently. He’s determined not to let the list grow longer. “We are open for business,” he declared in early May.

But, of course, the city wasn’t open — it wouldn’t officially be open until nearly June, when the state’s lockdown orders eased. Sean and Katey Sinclair know that firsthand: They own and operate the bar at the Castañeda and had planned on an April 1 grand opening for a 12-course fine dining restaurant in the hotel, called Kin. The opening never happened. But throughout the stay-at-home order the bar offered take-out, and it reopened outdoor seating June 3. When they do get to have a grand opening, they’ll offer a “more affordable five-course option,” Sean said.

Not much has changed since the town began to reopen in mid-May. There have been more people outside, because “we’re social animals,” said William Taylor, who, before becoming city manager on April 1, had worked as an economics professor, dean of the NMHU school of business, and assistant director for the state Legislative Finance Committee. But many people are still hesitant about going inside businesses and, for some business owners, reopening at a fraction of their capacity just isn’t worth it. “I don’t think this will be the case in our community, but nationally they say that probably 30 percent of restaurants will never reopen,” Taylor said.

Affeldt, the hotel owner, still thinks the city’s historic renovations will pay off. Las Vegas will get its “little renaissance” when things reopen, he said. “Historical data shows that after a crisis, people want to go out to eat and travel.”

Baca wants to believe that’s true. “People might say, ‘I want to be in a small town where there’s not as much risk.’” But as he stands outside his darkened movie house, he’s not sure anymore whether history will let Las Vegas off the hook. “We’ve borne the brunt of historical changes from the beginning.”