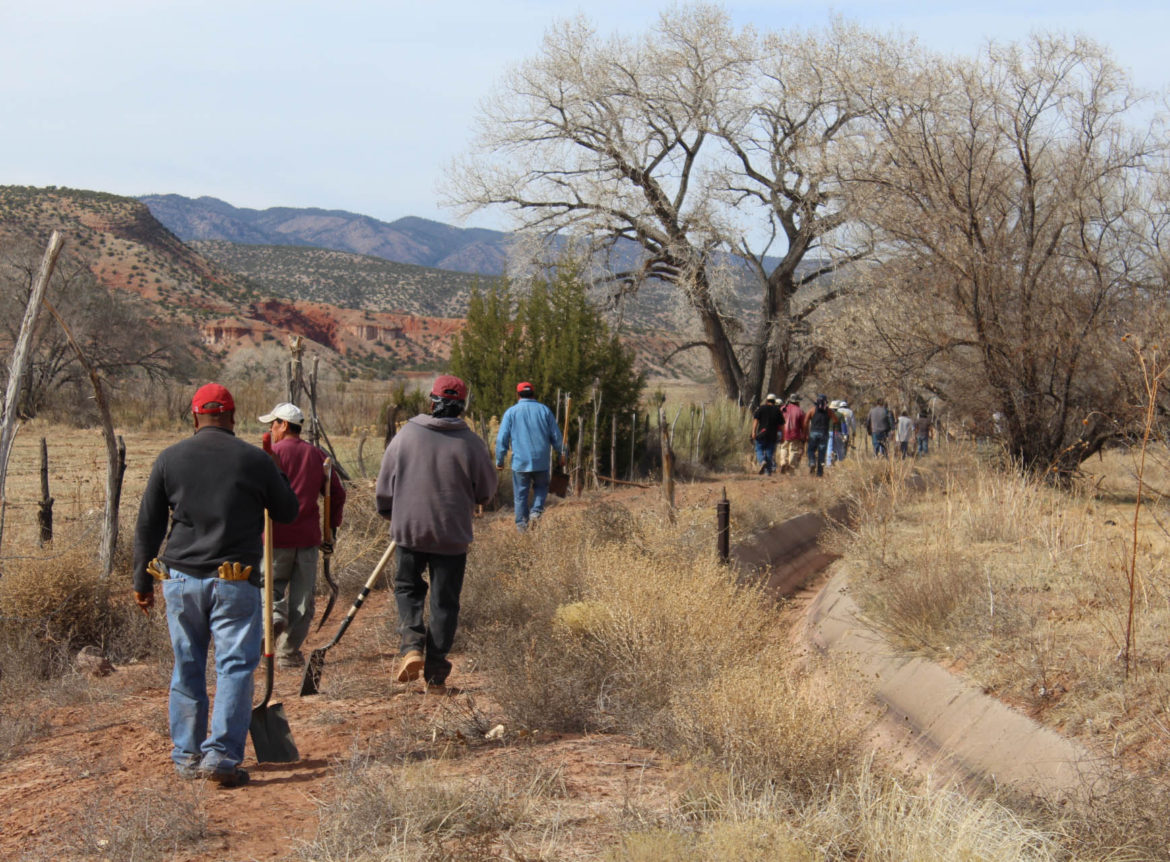 On May 5, Jemez Pueblo Gov. David Toledo was preparing for the arrival of a mobile testing unit to administer as many as 3500 COVID-19 swab tests to Jemez tribal members in the traditional village and nearby towns over the next two days.

Toledo, along with his tribal peers on the All Pueblo Council of Governors, had just signed a letter to the US Treasury Department inquiring about the release of CARES Act funding and federal Department of Health and Human Services’ relief funds to tribes. (To extend its testing capacity, Jemez Pueblo received just shy of $150,000 of HHS funding.)

The governor’s schedule that afternoon also included local duties. He planned to also check on the irrigation ditches that water the pueblo’s agricultural fields and visit with some fellow farmers.

A prodigious farming effort has been under way on Jemez since the governor ordered the pueblo to lock down on April 7. Jemez farmers, including the governor, have planted more than 100 agricultural acres of corn, chile and melons in anticipation of needing to feed the community into next year.

“We understand there might be a second (coronavirus) wave coming so we’re trying to prepare our food and our health for when that second epidemic might occur in the wintertime,” Toledo said.

Derrick and Raymond Toledo have helped their father, as they do every year, clean the ditches and tractor-braid and plant the governor’s fields. Derrick Toledo works as Indian Country Organizer for Western Leaders Network. He said that seed trading has become more vital than ever; he’s exchanged Jemez yellow corn seeds for Santo Domingo chile and Zuni blue corn. Plans are still underway, Derrick Toledo explained, for a harvest foot race in which pueblo men and boys sprint from one end of the village and back, cradling a harvest “bundle of joy.”

The hope is that this year’s yield will be even more abundant than usual.

“We’re trying to prepare mentally and physically to have food on the table that we grew ourselves,” Gov. Toledo said.

With high rates of diabetes and other underlying health conditions among members of NM’s 22 pueblos and tribes, food security has grown more pertinent as a response to the explicit public health threat of COVID-19.

Naturopathic Doctor Nicole Redvers, an assistant professor at University of North Dakota School for Medicine and Health Sciences and member of the Deninu K’ue First Nation, said at a Radcliffe Institute for Advanced Study Health Inequity panel in May that COVID-19 was “vastly under-reported” in Indian Country.

“COVID is requiring a new way of living and connecting to our original ways,” she added.

This critical time has galvanized Larissa Nez, 30, a millennial Diné who is home in Sawmill, AZ this spring for the first time in five years, after graduating from University of Notre Dame, then working in Portland, Oregon. She will start in-person graduate studies at Brown University in Rhode Island in 2021.

Furloughed from her job at the Navajo Nation Department of Diné Education, Nez has been spending her days deepening knowledge of traditional plants and forage, largely by communicating with her grandmother (from whom she’s social distancing) by text message. She has learned about edible wild onion and species of cacti and yucca, as well as medicinal and ceremonial plants, worked to shear the sheep and will be washing the wool in expectation of dyeing and weaving it.

“Food sovereignty connects to so many pieces,” she said. “You’re learning traditional ecological knowledge, origin stories.  You’re learning what those plants are, where they come from, what significance they have. It goes back to oral histories that grounded our traditions and tribes.”

“It’s really empowering. I feel security in knowing we have a garden, we have animals, we have sheep and plants, we can forage on our own. All that knowledge is being revitalized and nourished by my grandparents and my family.”

Nez has also been keeping her website updated with resource information on the mutual aid organizations striving to help redress the crisis on Navajo Nation now.

The extent of the problem, Nez said, was underscored when Gallup, NM went under weekend curfew and lockdown “without warning” to many rural Navajo families who depend on the border town for essential food supplies. The systems issue around the Nation’s food insecurity, she stressed, can’t only be solved by family gardens but must be addressed by government like the Navajo Nation’s council delegates and leadership.

In one bright spot, she said that the Navajo Farming Project in Nenahnezad, New Mexico, is distributing seeds on request when interested Navajo Nation members reach out by email. Yet she is worried. “It’s really hard to think about the long-term impact.”

“What if this goes on for the remainder of the year and next year? How will families navigate that situation?”

As local growers address food security as a fundamental return to tradition, there are important precedents already in place. Tewa Santa Clara artist Roxanne Swentzell published “The Pueblo Food Experience: Whole Food of Our Ancestors” in 2016 to highlight the health benefits of growing and eating traditional foods. Seed saving and sharing have been foundational steps in the movement.

A water catchment and drip irrigation system brings water to households and family fields. Geothermal technology controls the climate of an underground seed bank and four hoop houses (with two more being built.) The seed bank, dug and bermed 12 feet underground, has become a vibrant resource. All the New Mexico pueblos have sent farmers to Tesuque for seeds to plant and seeds to give back to this trove.

Each crop culture has its own story, Morgan said. He related that an initial planting of blue corn went from generating 20 pounds the first year to 350 pounds the next. Three new acres of community and family gardens—an almost 50 percent increase over last year— have come online this spring since the onset of COVID, and are watered by the drip irrigation system.

Morgan observed “a boom in young farmers wanting to learn, a lot of people taking interest in farming, both Hispanic and Native.”

But it does take time, Ballon said. “It is not easy to cut the dependency (on consumer food sources.)”

“Slowly, slowly, we’re showing the possibilities of how we can be—and how we can do.”

Cecilia Shields is the tribal interpreter of Picuris Pueblo, which is New Mexico’s smallest tribe, with 310 members, less than one-tenth the size of Jemez Pueblo. On April 23 and 24, Picuris conducted mandatory COVID testing for all members over age four, residing on the pueblo. All 197 tests came back negative, she said.

Roughly 100 acres of agricultural land on Picuris are home to a herd of pueblo bison, the historic food of the Picuris people who traveled the plains eastward to Mora to hunt the bison. Fifteen calves have been born this spring, Shields said. The herd numbers just over 40 animals now.

“It’s new hope and new life,” said Shields. “We’re looking at the bison in multiple ways—the main one being a food source for the people. As we all know, meat prices are going higher. Plants are closing. We have the opportunity to be self-sustaining and provide meat for our community through the bison program.”

She said the tribe hopes to be able to plant up to 133 agricultural acres this year with the three sisters crops of corn, squash and beans.

“That’s our goal, because we as a tribe are also facing a major water issue,” Shields said.

Such colonizer and environmental impediments are nothing new to indigenous agriculture, in addition to the economics of growing artisanally.

Del Jimenez is a NMSU agricultural specialist working out of Alcalde. He said he’s been disappointed by what he construes as under-utilization of “high tunnels” (hoop houses), which he’s helped to construct at all the NM pueblos under a variety of farming grants. Human labor shortages persist, he said.

As do systemic economic forces.

As Gov. Toledo said he’s fielded questions from tribal members about injecting bleach, and has watched food lines form in major U.S. cities on cable news, he recognizes the criticality of caring for his community and demonstrating the traditions of farming by example.

He remarked his new yellow corn shoots were poking green heads out of the ground. A hummingbird was tirelessly pollinating plants.  “Even that little hummingbird brings blessings to my people.