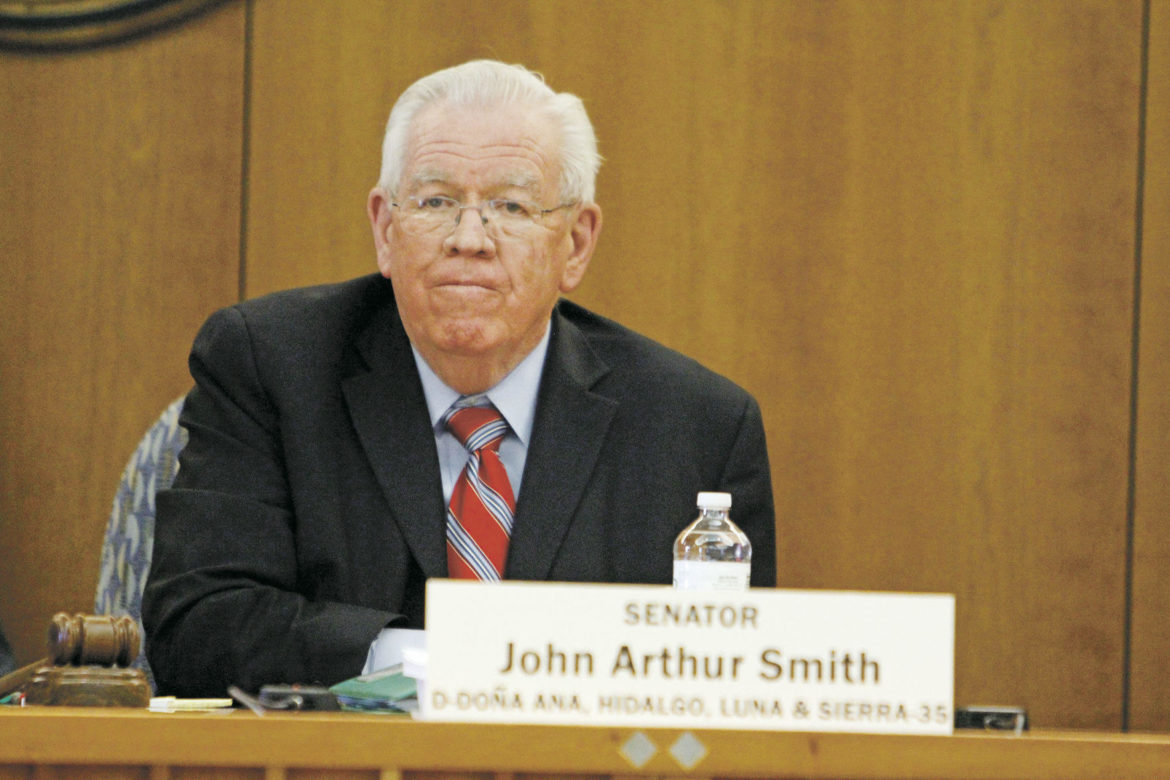 Senate Finance Chairman John Arthur Smith, D-Deming, says he will be ‘disappointed if we can't finish up in a day.’

The New Mexico Senate’s conservative-leaning Democrats long have been the gatekeepers — the ones who ultimately decide if legislation backed by the governor and the House of Representatives can become law.

Of course, the control they wield has an expiration date after a number of their most influential members lost primary elections this month to more progressive challengers. Those lawmakers will be leaving the Legislature at the end of the year.

Even so, they’ll have one last hurrah to exercise their power — the upcoming special session — and they could use it again to block bills backed by their colleagues.

This time, they might do that by leaving town.

While Gov. Michelle Lujan Grisham has not yet released the official agenda for the session due to begin ThursdayJune 18, she already has outlined several potential initiatives that go far beyond the main purpose of the emergency gathering, which is fixing the state budget for the fiscal year that begins July 1. Projected revenues for the state steeply declined following the legislative session earlier this year, leaving a gap estimated at more than $2 billion.

The initiatives Lujan Grisham is considering range from economic measures to help small businesses to efforts to streamline voting procedures ahead of the November election. In the wake of protests in the state and worldwide over the death of George Floyd, an unarmed black man killed during an arrest in Minneapolis, the governor also is considering police reforms.

Despite all that talk, some senators aren’t planning to be in Santa Fe long enough to debate much more than the budget.

“What I want to do, and what I think the Senate wants to do, is get in and get out,” Senate President Pro Tem Mary Kay Papen said. “And if the House wants to do all this stuff, that’s certainly their prerogative.”

Papen is one of the conservative Democrats who lost her primary race.

So, exactly how long do senators want the session to last?

“I was thinking maybe three or four hours,” said Sen. John Arthur Smith, another outgoing conservative Democrat, with a chuckle.

Smith, D-Deming, acknowledged he was joking, but the comment wasn’t far off from his true position on the matter. He said he will be “disappointed if we can’t finish up in a day.”

“I’m planning on being up there for a very, very short period,” said Smith, chairman of the Senate Finance Committee. “My interest is the budget only.”

Sen. Clemente Sanchez, chairman of the Senate Corporations and Transportation Committee, spoke in a similar vein.

“Well, I would just like to focus on the budget,” said Sanchez, D-Grants. “We need to get into the budget. That’s a problem that we have. Everything else can be dealt with in January.”

Like Papen and Smith, Sanchez will no longer be a senator in January. Sen. Gabriel Ramos of Silver City is another Democrat ousted by a more progressive candidate during the primary.

Sanchez said his position on the upcoming session has nothing to do with his departure at the end of the year.

Smith said senators’ views are reflective of how the body has typically approached emergency gatherings.

“The New Mexico state Senate historically in special sessions — they take care of the immediate need and then get out of there,” he said.

Whatever the reason, if senators stick to their plan, it’s likely to ruffle feathers in the state House, whose members already have publicly advocated for a number of non-budgetary bills they’re proposing.

“It will be enormously disappointing if the Senate absolutely refuses to act,” House Speaker Brian Egolf said. “This idea of, ‘We’re going to come in, pass the budget and be out in 12 hours,’ that’s a very old-fashioned view.”

Egolf, D-Santa Fe, said if the Legislature were to take up around 10 bills, it likely would finish by the evening of June 20. That would make for a three-day session, a longer period than the one- to two-day sprint some senators are envisioning.

“There’s a huge question mark: how all the members who didn’t prevail in their primaries, how they’re going to approach the session,” Egolf added. “We won’t know that until Thursday.”

Not all of the moderate- to conservative-leaning Senate Democrats want to limit their work to the budget.

Ramos said he favored taking up a wide range of bills during the session, including initiatives on voting procedures.

“Being that this is going to be my last session, I definitely would like to stay as involved as I can,” Ramos said. “So, I think right now I would love to be able to vote on these different measures.”

Lujan Grisham’s office has said its priority for the session will be to plug the estimated $2 billion hole in state revenue for the next fiscal year, as well as other economic issues brought on by the novel coronavirus pandemic.

The budget solvency plans released Wednesday by the governor and the Legislative Finance Committee are quite similar, proposing to use a mix of budget cuts, cash reserves and federal funding to mend the gap.

Yet in recent days, the governor sketched out several additional measures she said she could put on the agenda, which she controls. They include:

That the two legislative chambers’ have differing views on how to conduct the session raises the question of what would happen if the Senate didn’t stick around to hear additional proposals passed by the House.

According to the New Mexico Constitution, if the Senate adjourns while the House is still in session, senators must come back to the Roundhouse within three days to take up any bills the other chamber sent over.

“Neither house shall, without the consent of the other, adjourn for more than three days, Sundays excepted,” Article IV of the New Mexico Constitution states.

Smith said he’d be prepared to adjourn anyway when the Senate finishes the legislation it wants to address.

“Well, if we’ve completed our work, we will sine die,” he said, using the formal term for adjournment. “If they haven’t completed their work, we have to return in 72 hours.”

If it came to that, senators could just come back and vote down the House bills.

“I guess if we had to,” Smith said when asked if senators would return to Santa Fe under such a scenario.

“But we also can reject what was sent over once we come back.”