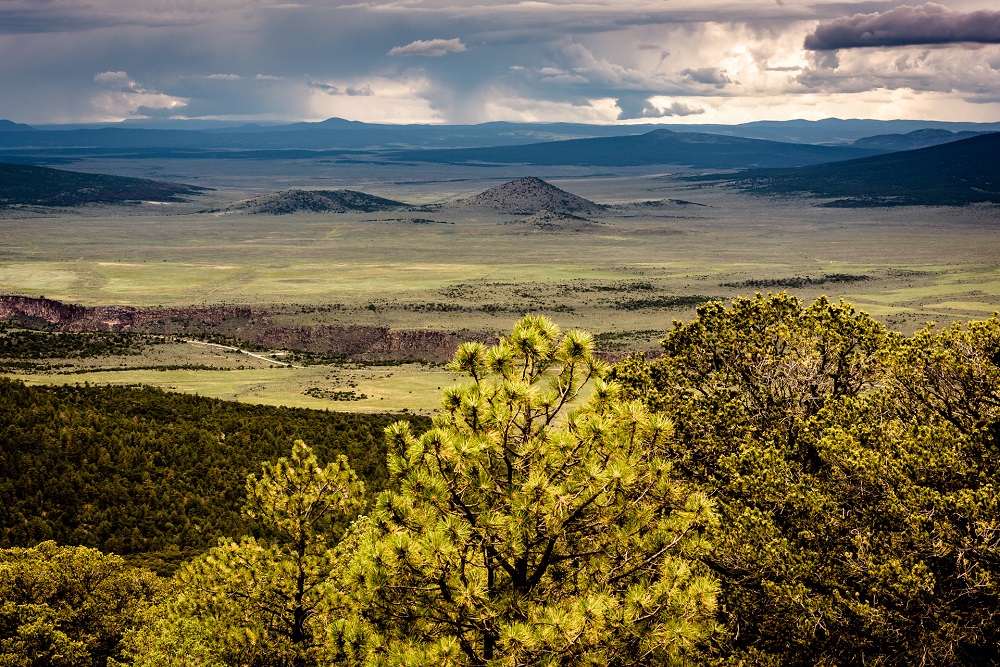 A view from Taos Plateau in norther New Mexico, taken in 2015. The northern portion of the state has been in a drought for years.

“I wish I had better news,” said Dave DuBois, New Mexico’s State Climatologist and director of the NM Climate Center at the New Mexico State University, during a weather outlook webinar hosted by the National Integrated Drought Information System (NIDIS) held in May. DuBois was looking at a three-month weather outlook map forecasting rain during New Mexico’s summer months and monsoon season.

“I really didn’t want to see this,” he said, swirling his mouse over a patch of brown in the Four Corners area. “Not a lot of good news there. This is showing some probability for below-average precipitation for northwest New Mexico.”

Experts agree 2020 is shaping up to be a challenging year for water in New Mexico. Despite a near-normal snowpack last winter, dry soil conditions and a very warm spring — with hardly any precipitation since January — has thrust much of the state into drought conditions, again.

John Fleck, director of the Water Resources program at the University of New Mexico, referred to it as a “sneaky drought” during a separate presentation hosted by NIDIS.

“How did this sneak up on us? It seemed like there was a lot of snow,” Fleck said, referring to snowpack in the Colorado River Basin. “In the middle of February it was looking like a close to normal forecast. And then the bottom just kept dropping.”

The northern portion of the state, along the Colorado border, is experiencing the worst of the drought. The Four Corners area in particular has been an epicenter of drought conditions for a few years now.

The latest modeling, visualized in the brown splotches on the weather outlook map, indicates the area may not see much water this summer, either.

“This is where we’re having problems,” DuBois said. “The further you get north, the drier it is.”

The mountains of New Mexico accumulated an almost normal amount of snow during the 2019-2020 “water year,” the time of year when the area receives the bulk of its precipitation. For New Mexico, the water year roughly runs from the first snows in October to a peak in April, when snowpack is at its highest, though the peaks in snowpack vary across elevation and latitude.

“We use that as our starting point for the start of the cold season, when we start to build our hydrologic storage areas,” DuBois said. “Usually, the peak snow is right around the beginning of April.”

Under normal conditions, the peak snowpack in April begins to melt in the early summer, leading to the runoff season, as the mountain streams carry the melted snowpack down from the higher elevations to the rivers.

In 2019, the state saw several big snow storms in the earlier part of the water year, dumping precipitation onto the mountain tops throughout the month of November. But the spring snowstorms, which would typically add to the snowpack to April, never materialized in many of the state’s water basins. Instead, the area saw unusually warm temperatures, which in turn led to an earlier runoff.

“We peaked early and we melted out early,” DuBois said. “We melted out weeks earlier than the average.”

In the northern water basins, much of that snowmelt didn’t make it down to the rivers this year, either. That’s because the soils of the area, parched from a poor monsoon season in 2019, soaked up much of the water as it melted.

Soil moisture was incredibly dry heading into the 2019 winter snow season, Fleck said, “especially in the Rocky Mountains of Colorado, where a big fraction of our snow pack comes from.”

“A big chunk of the runoff just never had a chance to make it to the river,” he said, adding that the issue was compounded by warmer temperatures during the late spring months.

Monsoons play an important role in soil moisture, and some rangelands receive as much as 50 percent of their precipitation. But the rain has to come at the right time to help combat drought conditions.

“It’s all about timing. That’s the big thing with drought and water supply,” DuBois said. “We could be way above average for the year, but if it fell during the wrong time,that can really mess up range conditions. That’s what we’re dealing with now in some parts of the state.”

“We had a few areas that were above average in the south central, but most of the state, particularly the northwest and east side of the state was dry,” DuBois said, despite a few late-season tropical systems that moved over New Mexico.

“It appears that in a lot of areas, the timing was off. When it got the rain, it was late,” he said.

Early snowpack peaks and early melting is the new normal for New Mexico, and there’s some evidence to suggest climate change is the cause.

“It’s been going on for more than a couple years. We’re trying to understand the causes of it,” DuBois said. “The main understanding that we have is warming temperatures are the main driver for that type of change.”

But by some estimates, climate change is only part of the story of this drought, Fleck said. The first two decades of the 21st Century have been the driest since the 16th Century, leading to what scientists have dubbed a “megadrought.”

“Anthropogenic warming is responsible for perhaps half of the dryness,” Fleck said. “In other words, it would have been a drought anyway; it was made substantially worse by anthropogenic warming. That is the challenge we face as we deal with climate change going forward.”

In the near term, New Mexico could face another warm and dry winter, DuBois said. Gauging ocean water temperature along the equator, we may enter a La Niña year in the coming months.

“Those are usually warmer and drier for most of the state,” DuBois said, while the El Niño years are typically cooler and wetter in New Mexico.

It’s still unclear if we’ll enter a La Niña year, but if we do, it could spell more trouble for communities in the state as the drought persists in the north and even pushes south.

“They’ve had a really tough two years. The center of drought in the whole country was the Four Corners area,” DuBois said. “They’ve gone through a lot, and we’ve seen the impacts on native vegetation. It’s pretty bad. In some of those areas, they still haven’t really recovered. We’re seeing a longer term dry in the north, but indicators that the drought is pushing south.”

In the meantime, DuBois said he’s hoping for more rain this summer.