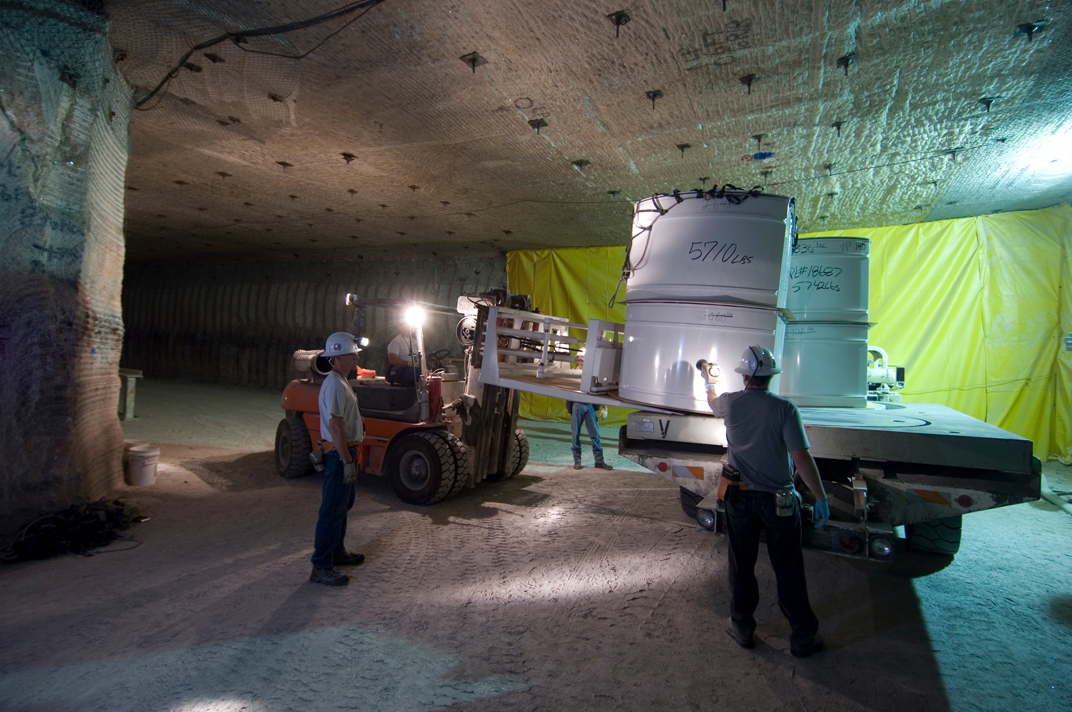 CH TRU waste containers are off-loaded in the disposal room at WIPP.

All systems, no matter how efficient, produce some amount of waste.

“Wherever people are doing something, there are trash cans around,” Dr. Robert Hayes joked to NM Political Report. Hayes is an associate professor of nuclear engineering at North Carolina State University and a former principal engineer at New Mexico’s Waste Isolation Pilot Plant (WIPP).

“Even if I’m making nuclear weapons, I’m going to be making trash,” he said.

The U.S. Government has generated many tons of such ‘trash’ from its nuclear weapons research programs. Some of this low-level waste has found a final resting place in southeastern New Mexico. WIPP, located on a stretch of land 30 miles east of Carlsbad, is the country’s only deep geological repository for this nuclear defense-generated radiological waste. Since the first load arrived at WIPP from the Los Alamos National Laboratory in 1999, the facility has accepted more than 12,700 shipments of transuranic materials, packaged in over 126,000 55-gallon drums and over 34,000 100-gallon drums. The drums are buried 2,150 feet beneath the earth’s surface, where the underground salt walls will gradually encase them in a permanent tomb.

Such precautions are taken because the waste contains varying amounts of radioactive particles—particles that will remain radioactive for thousands of years into the future. Plutonium-239, a byproduct of weapons production, remains dangerous to humans (and any other organism) for over 24,000 years. This is also why the site is so expensive to operate; the safeguards in place to package, transport, and ultimately dispose of this material poses a cumulative cost in the billions of dollars.

Since its inception, the site has generated fervent opposition and equally fervent support, several lawsuits, and decades of debate. When the inaugural big rig truck rolled into the facility 21 years ago, cheering proponents welcomed it to town while protestors attempted to halt the truck by lying in the middle of the street.

This divisive grand opening heralded subsequent decades of controversy. Now, as the government considers producing more nuclear weapons and restarting its long dormant weapons testing program, WIPP is back in the spotlight as the only facility in the country currently permitted to accept this refuse. A series of changes to the site permit, and to the character of U.S. national security more broadly, may mean a larger and more expansive WIPP facility than anyone imagined.

Across the sites that compose the country’s nuclear complex sits a massive amount of surplus plutonium. This excess plutonium, formerly part of the U.S. strategic stockpile, was fabricated for use in nuclear bombs. But as part of the Plutonium Management and Disposition Agreement (PMDA) the U.S. signed with Russia in 2000, the U.S. agreed to use this plutonium in nuclear fuel rods, which would power reactors—to recycle it, in other words.

This type of fuel (mixed oxide, or MOX, fuel) is already used in reactors in countries including Germany, Japan, and Switzerland. The process ensures that the recovery of the plutonium by the host country—say, if it changed its mind and wanted to use the material to make a bomb—extremely difficult. At the Savannah River Site (SRS) in South Carolina, the government spent $7 billion on a mixed oxide fuel fabrication facility to recycle this excess plutonium. But as the costs continued to inflate, Congress voted in 2018 to close down the project.

That waste is now being considered for emplacement at WIPP. On March 31, the National Academy of Sciences, Engineering, and Medicine released a report covering the feasibility of storing this excess plutonium—at least 34 metric tons of it—in New Mexico, using a dilution method. Although this is technically feasible, it may require higher levels of security at the site and most certainly an expansion of its underground portions, the NAS report says.

“I have never met a nuclear engineer that did not think we should have maintained the ability to recycle,” Hayes said, referring to the mixed oxide process. “We only use a fraction of the percent of the total energy in something and then throw it away. That’s what we do.”

The U.S. Department of Energy (DOE) is now considering opening a plutonium pit production facility at SRS instead. Plutonium pits are the spherical balls that trigger a thermonuclear weapon. Assuming a production rate of 50 pits per year, a draft environmental impact statement for the pit production facility published in April said as much as 31,350 cubic meters of waste could end up needing shipment to WIPP—nearly half of WIPP’s overall capacity.

The Trump administration has also been evaluating the possibility of restarting the U.S. nuclear weapons testing program, which was suspended in 1992 by bipartisan Congressional legislation. Just this month, the Senate Armed Services Committee on June 11 approved an amendment to the defense budget earmarking $10 million for a potential nuclear test. In response, 12 nuclear scientists sent a letter to Senate Majority Leader Mitch McConnell voicing their strong opposition to the resumption of nuclear testing.

In all likelihood, any waste generated from these projects would end up at WIPP. A spokesperson for Nuclear Waste Partnership, the contractor that operates WIPP, told NM Political Report that DOE projects it will have adequate capacity at WIPP for all the waste.

How full is WIPP?

That depends on who you ask.

WIPP is governed by a piece of federal legislation called the 1992 Land Withdrawal Act, which passed formal control of the land from the Secretary of Interior to the Secretary of Energy for use of a nuclear waste repository. The law establishes a limit on the capacity of the amount of waste buried at the site of 6.2 million cubic feet, or 175,564 cubic meters.

Prior to December 2018, the site was considered to be at around 50 percent capacity. Then, DOE submitted a permit modification to the New Mexico Environment Department (NMED) for a new methodology to calculate how waste volumes are measured and reported. Instead of determining the capacity of WIPP based on the volume of the container itself, and the air around the containers, DOE proposed measuring the gross internal volume of waste inside the container only. Some 55-gallon containers contain very small inner compartments to store higher levels of plutonium material. What the DOE was proposing was counting only the volume of that small inner core of material, rather than the overall size of the drum. Under then-Gov. Susana Martinez, the state approved the proposal in December 2018.

“Rather than the site being 60 percent filled up, it’s only about a third filled up. One thing [DOE] is doing is to say, there’s not as much waste as we’ve been saying for all these years, so therefore we have even more space,” Don Hancock, director of the Nuclear Waste Safety Program at Southwest Research and Information Center (SRIC), told NM Political Report. SRIC is a New Mexico-based environmental and social justice group that has long kept tabs on policy and permitting issues at WIPP.

Under these new calculations, DOE, as of May 30, has disposed of around 2.4 million cubic feet, or 69,000 cubic meters of waste—about 40 percent of WIPP’s capacity.

Fortunately for DOE, they will likely have plenty of time to dispose of this waste. In DOE’s 10-year site permit renewal, submitted to the NMED on March 31, the department says that the disposal phase—the phase during which the site receives and buries waste—”will last until the disposal objectives of the DOE are reached, i.e., disposal of the nation’s TRU [transuranic] waste per the WIPP Authorization Act of 1980.”

The original site permit submitted to the environment department in 1998 assumes that WIPP has a 25-year lifespan to accept waste, whereby it will enter a period of decontamination and decommission for 7-10 years; overall, around 35 years or so from operations commencement to closure. Now DOE is referring to that 35-year timeline an “obsolete concept,” according to the permit.

“I’m actually pretty concerned about that,” Representative Angelica Rubio, D-Las Cruces, told NM Political Report. Rubio is the chair of the interim committee for Radioactive and Hazardous Waste and the vice chair of the House Energy, Environment and Natural Resources Committee. With the more recent release of a draft environmental impact statement from the Nuclear Regulatory Commission for a separate nuclear waste facility that would be operated by Holtec International, she said is concerned that the nuclear waste industry will fill in the economic gaps from ongoing uncertainties in oil and gas markets.

From here, NMED will submit a draft permit for public comment and any parties who have disagreements with the contents of the permit, like SRIC, will enter a hearing with DOE. At the capital, Rubio said she hopes the committee can begin to address some of these issues once the interim committees resume meeting.

But although the future of WIPP is still being sorted out in the bureaucratic back-and-forth endemic to such processes, the inescapable reality of the waste—and what to do with it—remains. In the meantime, Hancock said SRIC will continue to participate in the ongoing discussions about the site with DOE and NMED. “The public still has a chance to weigh in on this,” he said.