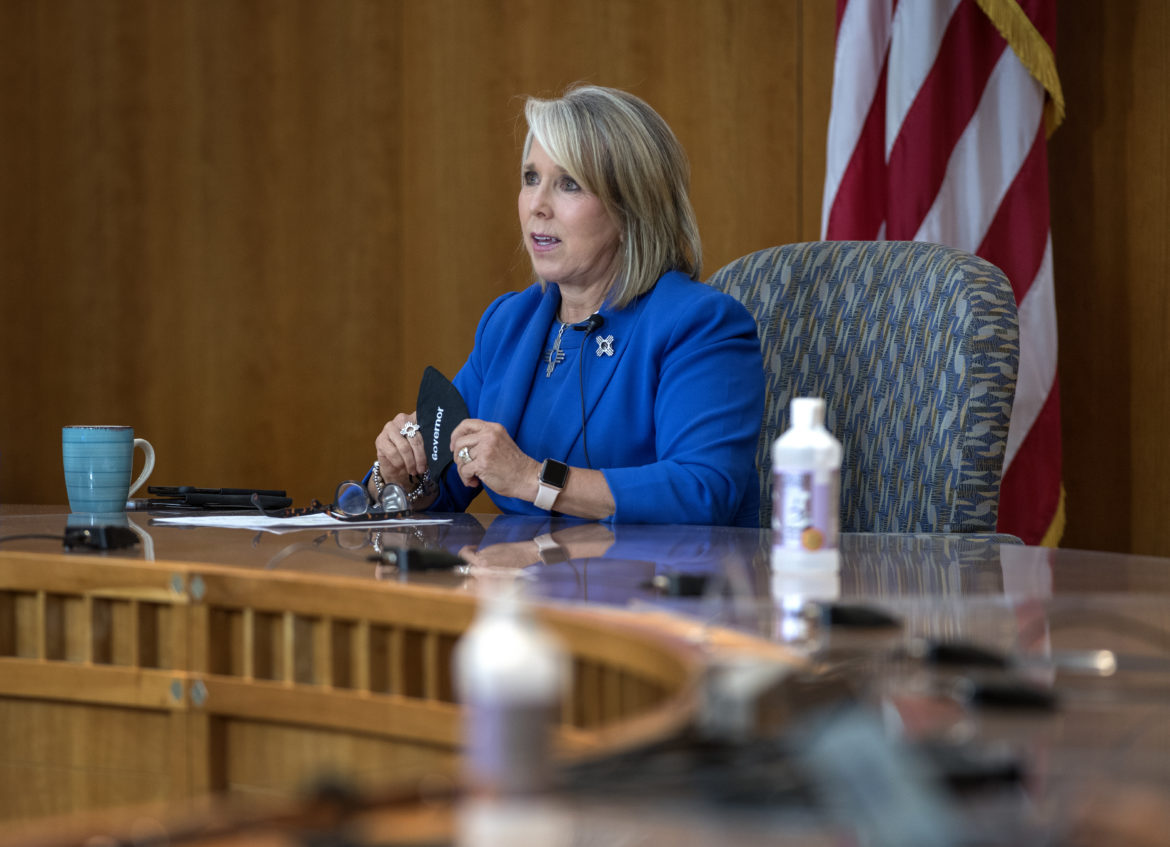 Governor Michelle Lujan Grisham announces some return to closures and face mask will be required any time someone leaves the home. This was during her weekly update on the COVID-19 outbreak in New Mexico and the state effort to control it. The news conference is being held at the Roundhouse in Santa Fe, Thursday July 9, 2020.

Gov. Michelle Lujan Grisham, citing an “untenable” increase in cases, brought back some restrictions beginning Monday, including saying that restaurants and breweries will not be able to have indoor service and restricting access to state parks to New Mexico residents only.

But, she warned on Thursday, if things don’t improve, in-person schooling will not reopen this fall because it would not be safe for students, educators or other staff.

This all came as the state sees its highest increase in cases, even higher than the first peak in May. The state has announced more than 200 cases of COVID-19 for over a week, and cases increased by 79 percent over the last 16 days.

Secretary of Health Kathyleen Kunkel said DOH has done 491 “rapid responses” for testing at places of employment since May 11.

She also noted the long lines as people seek tests at places like Balloon Fiesta Park in Albuquerque, with some getting in line as early as 3 a.m.—causing those running the site to close down operations before 9 a.m. because so many people were in line.

“We are happy that people are coming to get tested,” Kunkel said. “This is just an example of the increase in the people who want to be tested.”

But it also led to workers being out in the heat for hours at a time, so the drive-through testing facilities may alter hours. This weekend, it is expected to reach 100 degrees in much of the state and close to 110 degrees in some areas.

“We are going to figure it out,” Lujan Grisham said. “We don’t want New Mexicans waiting in hot cars either.”

“The whole point of this, and what we’ve learned in reopening business, when you reintroduce risk, if you don’t do it in a moderate, slow, safe way you can have results that only give you one option when you have increased cases, you close things,” Lujan Grisham said.

Restaurants and breweries were the first of those closures, with indoor dining again prohibited beginning on Monday.

One reason they targeted restaurants, and did not bring back other restrictions, is because the state saw a 16 percent increase in COVID-19 infections in restaurants.

The governor emphasized that it was not restaurants, but the behavior of people that led to the increase in cases.

“Restaurants didn’t do this to New Mexicans,” Lujan Grisham said. “New Mexicans did this to restaurants.”

Schools, Lujan Grisham said, would be a particular emphasis for the state, as they are currently slated to restart in less than a month.

The goal, she said, is to get to the point where the state can safely have in-person instruction for five days a week, as it was before the pandemic. But a hybrid model, delaying the start of the school year and other options were all on the table and would be implemented first.

Related to the news on schools, Lujan Grisham announced soccer and football, identified as contact sports, will not take place this fall and non-contact fall sports would be under review.

“Our students, our educators and their families must be safe,” Lujan Grisham said.

She said it was impossible to properly social distance for these sports.

Shortly after her announcement, the New Mexico Athletic Association, which governs high school sports, said soccer and football would be moved to the spring.

If schools do not reopen for in-person teaching, no sports could happen.

Lujan Grisham said she did not have the authority to cancel college football, but encouraged universities in the state to do so.

She also announced that only New Mexico residents would be allowed to go to state parks, and that visitors would need to demonstrate proof of residency.

State parks are only open for day activities and camping is still prohibited.

While the early phase of the pandemic had more infections among elderly residents, and relatively level rates among those between ages 20 and 60, Human Services Department Secretary Dr. David Scrase said that has started to shift.

He also said the age of those who have died with COVID-19 has also started to change, reflecting what is happening in other areas of the country and world.

“We’re starting to see more mortality in the younger age groups,” he said.

As for the overall spread, he called southeastern New Mexico a new “hot spot,” and said the seven-day average daily growth rate was highest in Lea, Otero and Eddy counties.

But it wasn’t just that area.

“The problem is, we’re seeing a lot more cases,” Scrase said. “And now we’re seeing them everywhere and with everyone.”

It wasn’t coming from any one location; there was no one superspreader event, either.

Scrase agreed and said he was also looking at those in southern and eastern New Mexico going to El Paso and Lubbock, two areas in Texas with a high transmission rate.

“We’re much more mobile,” he said. “People are out and about.”

Mask up, respond to tracers

As always, the governor and officials, including Dr. Nancy Wright, the president of the New Mexico Medical Society, said the best thing all New Mexicans could do to slow the spread of COVID-19 is to wear masks.

“The science is showing more and more that face masks help to stop the transmission of the virus from one person to the other,” Wright said. “It isn’t perfect, but it has been shown to really help.”

The new public health order will require those exercising in public to wear masks, which would include walking, Lujan Grisham said.

Those who do not wear masks would be subject to a ticket for a $100 fine, which the governor said she hoped more law enforcement officers and jurisdictions would enforce.

They all emphasized that wearing masks was the number one way to slow the spread of COVID-19.

The other big way to slow the spread is by contact tracing.

She noted, when asked, that there has been no contact tracing data to identify any increases related to the recent protests.

But, she said, it was important for people to speak to contact tracers so the state can manage the spread. Many people are not answering the phone or calling the state back.

“We’re saving lives and making sure that we don’t have further outbreaks,” Lujan Grisham said. “We need you to give us further information so that we can protect you.”