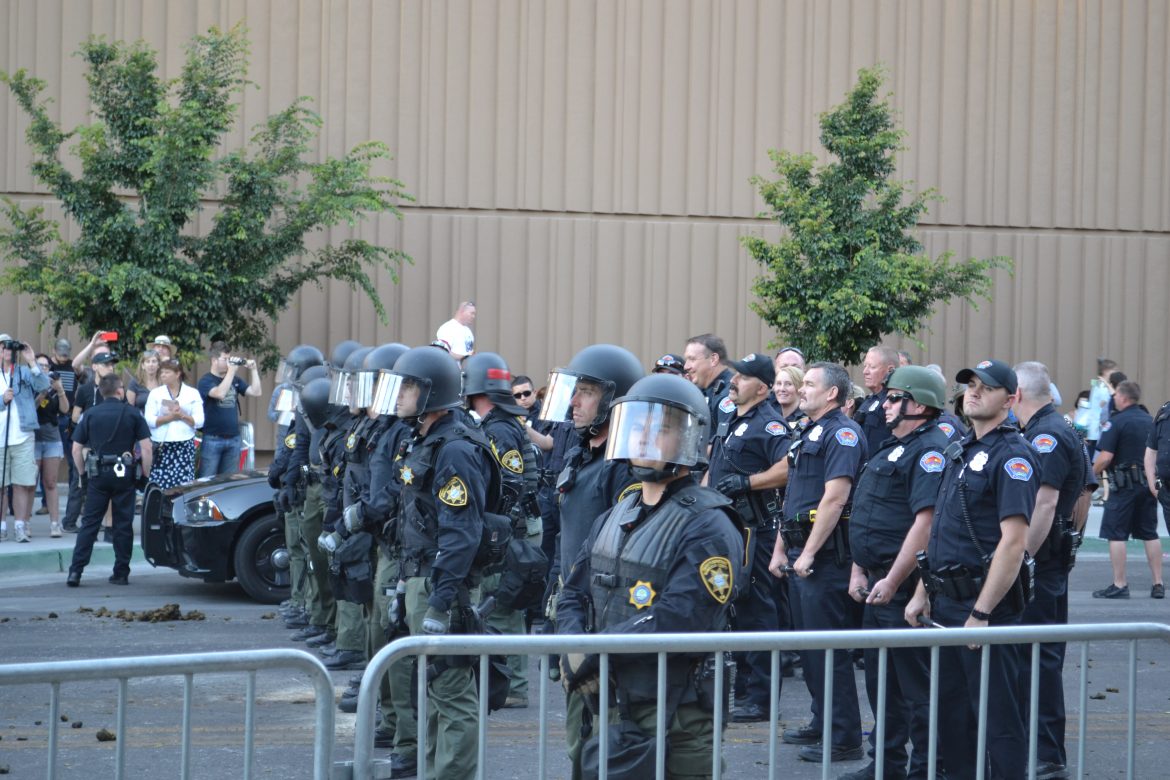 Police, including some in riot gear, stand outside the Albuquerque Convention Center.

An Albuquerque advisory board on Thursday voted to condemn the use of city buses for police during protests.

“How many times have we had folks come in and give us feedback about how horribly implemented [Albuquerque Rapid Transit] was or stops being moved? And I think this contributes to that feeling that transit and transit resources aren’t here for the people but they’re really here for the benefit of something else,” Chávez said.

The only board member who voted against it didn’t offer a specific reason, but said he wanted to hear from Albuquerque Mayor Tim Keller first.

Albuquerque police have responded to at least two protests with a team of officers transported by city buses.

The transit board’s incoming chair Christopher Ramirez agreed that police unloading out of a city bus during times of protests or civil unrest is a bad image for the transit department.

“I don’t want our community looking at public transit as a part of the problem,” Ramirez said.

Albuquerque Paratransit Advisory Board Chair Jacqueline Smith also offered up her support of the resolution. She said the use of transit vehicles for police transportation is in an outdated practice in other parts of the country.

“We’re behind the curve on this,” Smith said. “Large metropolitan cities such as Boston, New York, and San Francisco, just to name a few, have already realized their error and have discontinued the use of public transportation to transport law enforcement.”

Last month, Seattle’s transit service announced it would no longer make buses available to police who are responding to protests.

In Pittsburgh, a transit employee union said drivers would start refusing to drive police to protests.

Transit spokesman Rick De Reyes, in an email, said there is no formal agreement between the Albuquerque Police Department and transit since they are both city departments and that it’s common for city buses to be used for various purposes.

“There is not a [memorandum of understanding] with APD and Transit for the use of vehicles. Since we’re part of the same organization, there isn’t a need for one,” De Reyes said. “Requests are on a case-by-case basis, and Transit works to provide assistance to other departments if we are able to do so.”

De Reyes cited other instances where city buses have been used to provide things like wireless internet access, Balloon Fiesta transportation and in emergency situations.

He did not say whether the city would stop transporting police in city buses, but said they always take the advisory board’s recommendations seriously.

“We value the advice of the Transit Advisory Board and always give it due consideration,” De Reyes said.