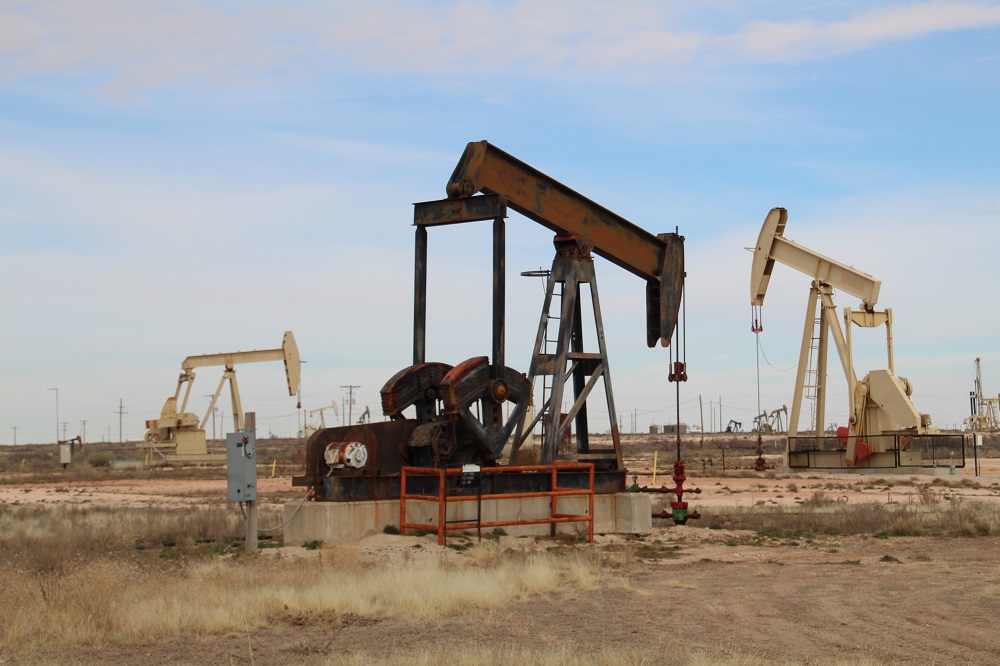 To Nathalie Eddy’s eye, Loco Hills has become “a graveyard” of oil and gas development.

Eddy is the Colorado and New Mexico field advocate at the environmental group Earthworks. Eddy works frequently in the Permian Basin, using special imaging cameras to capture methane leaks coming from oil and gas wells sites in the area.

Loco Hills, located north of Carlsbad on the Lovington Highway, is a legacy oilfield whose landscape is now dotted with inactive wells, and a few wells still producing, stretching as far as the eye can see. Most of those defunct wells are located on state or federal public lands and they aren’t going away anytime soon.

The area “offers a sobering glimpse of drilling’s irreversible damage that scars these public lands and makes the land unavailable for any future use for future generations,” Eddy told NM Political Report.

There is concern that other parts of the Permian Basin may suffer a similar fate. The U.S. Bureau of Land Management’s Carlsbad field office was considered the busiest in the country last year, thanks to record levels of oil and gas production in the Permian Basin. But as we enter the fourth month of an unprecedented global pandemic—during which a price war between oil producers Saudi Arabia and Russia drove the price of oil into negative territory—the future of oil and gas is less certain than a year ago.

Some predict a wave of bankruptcies will sweep through the industry if the price of oil doesn’t recover, and that could leave a glut of non-producing wells in its wave with no one to take responsibility over or pay to reclaim. When oil and gas operators cannot afford to pay the costs of plugging inactive or non-producing wells and the subsequent clean-up, the wells become “orphaned” and those costs fall on taxpayers.

“I think it’s a valid concern. It depends a lot on oil prices over the next year or two,” said Adam Peltz, senior attorney at the Environmental Defense Fund’s energy program. “If they remain really low, for a really long time, then yes, you will see a lot more orphans going on to state or federal rolls, which is a real problem. If prices recover—which they very well might—then that impact will be blunted.”

If the oil market struggles to rebound, up to 70 percent of the state’s 57,000 active wells are at risk of becoming uneconomic and either shut-in or orphaned, according to Oil Conservation Division Director Adrienne Sandoval. And in the meantime, state and federal regulators are struggling to keep pace with the current inventory of orphaned wells in New Mexico and elsewhere.

BLM accounts for the lion’s share of oil and gas leasing that has occurred in the state over the last few years, but the agency doesn’t actually track the number of orphaned wells under its management. Instead, the agency requires its field offices to perform periodic reviews of inactive wells to determine whether those wells are capable of producing in the future, or if the companies that own them have submitted reclamation plans.

“BLM does not have a centralized database of these wells, and so it’s very difficult to really get a handle on the number of federal and tribal wells that are orphans or likely orphans,” Peltz said. “It’s presumably a lot.”

There is wide agreement by groups that BLM’s inventory of orphaned wells is simply inaccurate. Press inquiries conducted by NM Political Report found significant discrepancies between BLM’s accounting of orphaned wells and the state’s.

NM Political Report reached out to both EMNRD and the BLM about this discrepancy. BLM directed us to ask EMNRD how it tracks the numbers.

“Our numbers are up to date as of yesterday and come off the publicly available Inactive Well List in our E permitting portal,” a spokesperson for EMNRD told NM Political Report. “We have a good working relationship with BLM and will continue to work together to plug wells on federal land.”

Orphaned wells, which Peltz referred to as “mini-Superfund sites,” pose threats to both the surrounding environment and the surrounding communities. Idle and abandoned wells are known to leak fluids, oils and methane, and the disturbance to the land itself can leave scars for decades to come if not properly reclaimed.

Well plugging and reclamation activities, however, are incredibly expensive. So expensive, it seems, that well sites are rarely completely reclaimed.

“You picture what a clean up looks like—I don’t know what it looks like. You go out there and see abandoned tanks that are knocked over on their side…there’s residual product left on the ground, you can still smell things,” Eddy said. “It may be shut-in, but it’s not a place you’d take your kids for a picnic, or go hunting on. That’s the end of that use of land for anything. It costs a whole lot more money to go back and restore it to what it might have looked like previously.”

Both state and federal regulators require operators to offer financial assurances that they can clean up well sites when the wells become inactive or stop producing. But those assurances inevitably fall short of the true reclamation costs, and the taxpayers foot the remainder of the bill.

The problem is especially egregious on the federal side, experts agree. The BLM tends to set its reclamation bond amounts at the regulatory minimum, using figures that haven’t been updated since the 1950s, according to a 2019 report from the U.S. Government Accountability Office. That report estimates the price of reclamation to range between $20,000 to $145,000 per well, while the average bond amount per well in 2018 ranged from $890 to $2,691.

The report also found that, while the total number of wells on BLM lands has increased since 2008, the total value of bonds held by BLM has actually decreased. In other words, as more wells have been drilled in the last decade, the BLM has actually collected less in bonds.

Bigger oil and gas companies are also often able to shirk reclamation responsibilities by selling off less-productive assets to smaller companies, who are in turn more likely to run into bankruptcy and be unable to cover plugging and reclamation costs. That’s exactly what’s happened in the San Juan Basin, Eisenfeld said.

“All the majors have left and have passed on their assets to smaller oil and gas companies. There are a lot of indications that oil and gas is on a decline here, and with the massive amount of infrastructure, 40,000 wells, there’s all sorts of legacy issues,” Eisenfeld said.

The complicated land management framework in the region has led to a “smorgasbord of responsibility” for abandoned and orphaned wells that has allowed some wells to slip through the regulatory cracks, he said.

New Mexico, like most other energy-producing states, has struggled to cover the costs of its existing orphaned wells on state lands. The steep drop in oil revenue will only further stress the state’s ability to clean up orphaned wells.

In June, OCD Director Adrienne Sandoval testified before Congress in support of the federal government providing funding to states to help cover reclamation and remediation costs. Sandoval said the state currently has 708 orphaned wells across state and federal land, but only $2 million in financial assurance from operators to cover well plugging and site reclamation. Plugging all those alone will cost some $24 million, she said. That doesn’t include estimated site remediation costs, which Sandoval said can range from $50,000 to millions of dollars.

A federal orphan well fund is a step in the right direction for tackling this issue, according to Peltz.

“New Mexico is emerging as a leader on this subject, especially around the possibility of orphaned well funding for BLM and the states, to be made available as part of an upcoming stimulus package,” Peltz said. Other policy reforms might include things like reviewing bond amounts when the risk profile of wells covered by blanket bonds begins to change, ongoing testing to ensure idle wells aren’t actively polluting, and employing more fees to help cover the costs.

But, Peltz said, while comprehensive reforms are needed, including bonding increases, getting the levels right is critical in order to avoid unintended consequences.

“You don’t want to create a system where it’s ok to walk away because you know the government is going to pick up the tab. But on the other hand, if you put a single well bond on every well in the United States that would cover full costs of closure, that would bankrupt thousands and thousands of operators, and immediately cause this tidal wave of orphaned wells that everyone is trying to avoid,” he said. “It’s a really tricky line to walk. How do you get more money into a system from the regulated entity, in a way that is fair, without knocking them into bankruptcy and making the problem even worse?”

Correction: This story was updated to make it clear that the Environmental Defense Fund supports federal bonding reform