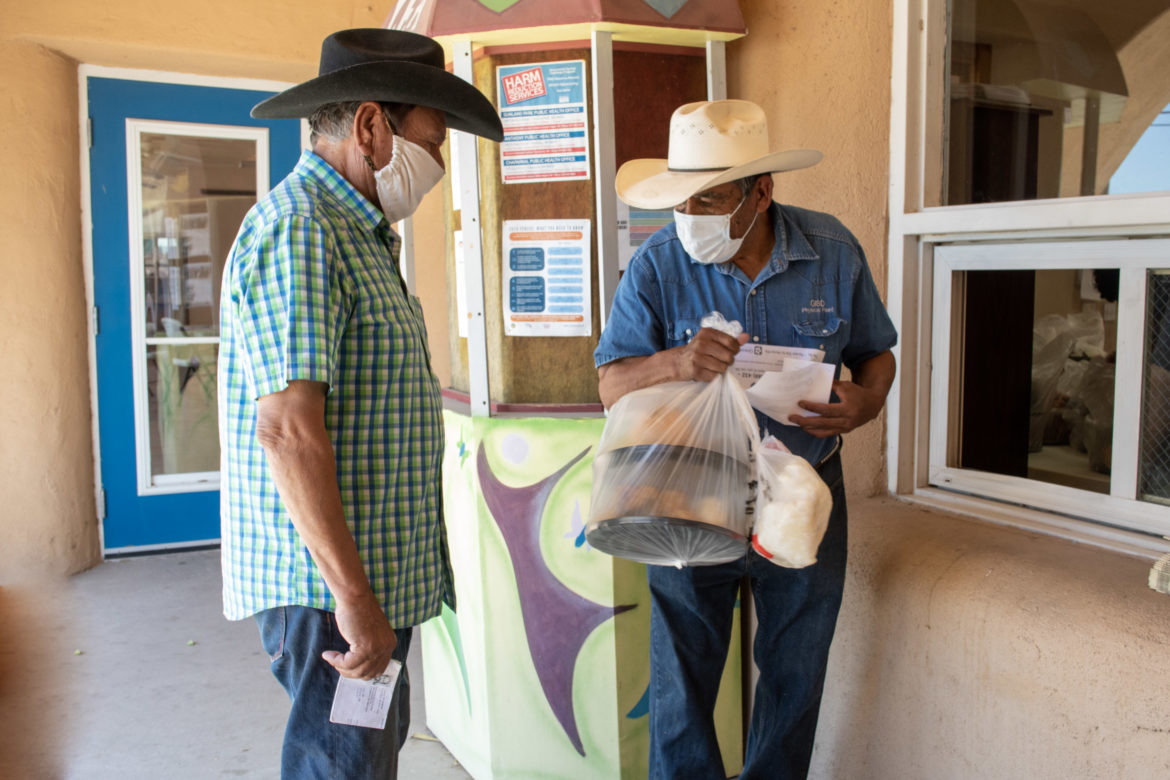 At the Women’s Intercultural Center in Anthony, two men pick up food donated by community businesses and individuals.

ANTHONY, N.M. — On a spring day during the coronavirus lockdown, Fernie Herrera set up an outdoor stove in his spacious backyard. He unfurled the awning on his camper — parked under the pine tree that towers over the family house — and invited his kids and grandkids over for a campout.

If it weren’t for the pandemic, Herrera might have been out fishing or hunting rabbits. Instead, with his daughter and her three children, he ate steak and potatoes inside the camper as if they were camping in the woods.

“With the pine tree there, that was our forest,” he said. After his daughter left with the kids, his son’s family arrived, extending the day’s activities while being mindful of the state’s prohibitions against large gatherings.

This story first appeared at Searchlight New Mexico and is republished with permission.

In Southern New Mexico, the lockdown has drawn its share of criticism. Some officials have attacked the state’s mask-wearing mandates as a violation of their God-given rights. But Herrera — a former fire chief who serves as a city trustee and plans to run for mayor — stands behind Gov. Michelle Lujan Grisham’s efforts to flatten the curve: “I support masks,” he said. “I support social distancing. Because, you know, in my 74 years of life that I’ve been around, I have seen pandemics. I have seen polio. I had polio when I was in fifth grade.”

Herrera is aware of the economic setbacks that go along with lockdown. Even in good times this quiet border town — whose population hovers just under 9,400 — has only a handful of businesses. They include one gas station and a single convenience store whose two refrigerators are stocked with the basics: cheese, eggs, milk, orange juice, soda and a small selection of vegetables. Anthony is home to Diablo Fireworks, which calls itself the state’s largest fireworks store, but more typical businesses are the lunch trucks selling burritos and tortas, sidewalk fruit vendors, barbers, and financial service offices peddling unsecured loans.

Set amid the dairy farms and pecan orchards of southern Doña Ana County, the city has had some success in attracting young working families to the scores of affordable new homes cropping up around town. But economic growth is always an on-again, off-again affair here. As work life ground to a halt with the lockdown, gross tax revenues and other income plunged. The city government took a hatchet to its $2.7 million budget, cutting spending to just over $1.8 million.

“The health crisis has affected everything,” said City Manager Oscar Dominguez. In 2019, Anthony finished the fiscal year with a $760,000 surplus. This year, even with massive cuts, it will operate with a $1.08 million deficit.

Ever since its incorporation 10 years ago, Anthony has strained to gain an economic foothold.

The median household income here is $23,378, and slightly more than 45 percent of its 9,400 residents live below the poverty line, according to U.S. Census data from 2018. Many locals commute to jobs in restaurants and hotels in Las Cruces, half an hour to the northwest, or in El Paso, Texas, about 30 minutes to the southeast. Others work in construction, heavy industry and agriculture.

Herrera is a third-generation Antonian whose grandparents owned a small farm outside town. He has never forgotten the effect that his bout with polio — the coma, paralysis and six-month recovery — had on his family. His father was a farm laborer, his mother a homemaker who cared for five young children. When disaster struck in 1956, the Herreras relied on the generosity of neighbors to keep gas in the family car so they could drive to Las Cruces, where 10-year-old Fernie lay hospitalized.

Herrera’s family is taking the pandemic seriously. His grandson Adrian Arias, who just graduated from high school, told him: “I’m only 18 and I’m just barely going into the world. I don’t want to get that thing and be handicapped or die.”

Almost equidistant between Las Cruces and El Paso, the community that is now Anthony once hosted 16th-century travelers along the historic Camino Real connecting present-day Santa Fe and Mexico City. About 20 miles from the Mexican border, Anthony remains a quintessential border town. Nearly a third of its residents are immigrants, and most retain ties to Mexico; indeed, 84 percent of residents speak Spanish at home.

Until its incorporation in 2010, the city was designated as one of New Mexico’s 171 colonias — small, unincorporated border communities that typically suffer from a lack of basic infrastructure. Anthony has modernized considerably over the years. Between 2000 and 2010, its population increased by 18 percent; its rate of growth is among the fastest in the state. But with growth comes a challenge: If, as expected, its population eclipses 10,000 in the 2020 census, Anthony will lose state funds earmarked for colonias and other small cities with populations under 10,000.

The assumption is that a growing population means a growing tax revenue base to replace state assistance. Pre-COVID-19, the city was taking steps to grow those revenues.

Mayor Diana Murillo-Trujillo’s administration had developed plans to stretch the city’s border northward toward Las Cruces with the hopes of attracting travelers and new businesses — perhaps even the town’s first-ever motel. In January, when the Dos Lagos Golf Course shuttered, the city saw an opportunity and bought the 50-acre property for $3,139,500. The city envisioned selling off parcels for housing development while leaving plenty of room for a new park and recreation center.

Those plans are now on hold.

Between February and May, unemployment rose from 6.3 to 8.5 percent in Doña Ana County. Among New Mexico’s 33 counties, it has the fourth-highest number of COVID-19 cases: 1,233 as of July 7. Since the county registered its first case on March 1, it has seen a steady uptick and 10 deaths. At a meat processing plant in Santa Teresa, 13 miles from Anthony, 57 workers were infected in May and June. On July 6, Doña Ana County registered 85 new positive cases – its largest single-day increase since the outbreak began.

The surge is even greater to the east in Texas and to the south in Mexico’s Chihuahua State, where 539 people have already died in Ciudad Juárez. So far, there has been none in Anthony. But the encroaching pandemic threatens the little city’s hopes for economic growth, the stability of its working class and immigrant communities and the dreams of young residents who strive to bring college degrees back to their community.

In 2018, the state Department of Health identified Doña Ana County as the third worst place in New Mexico to be a child. Half of its children live below the federal poverty line, and so many go hungry at home that area schools serve free breakfast and lunch to nearly all students. Poverty contributes to high rates of teen pregnancy and inadequate prenatal care. The majority of 911 calls are for domestic violence.

Nearly half of Anthony’s population is under 18, but for years the city longed for a modern public playground. Built as the fulfillment of a campaign promise by the mayor, Lil’ Adams Park finally opened two years ago in Adams Ball Park at the center of town. It has two red slides and a jungle gym that’s shaded by a big green awning. During the recent stay-at-home orders, the playground sat empty behind a quickly erected gate wrapped in tattered yellow caution tape.

A project that would have allowed the city to build a flood retention basin in the park was thrown off track in June when the state rescinded a $1.5 million grant because of budget shortfalls. For the time being, ballplayers must put up with a field that ponds whenever there’s a heavy rain. Next year, the city will reapply for the grant, which would also protect low-lying houses, some of the oldest homes in Anthony, from getting washed out in the next 100-year flood.

Smack on the New Mexico-Texas border, Anthony, New Mexico, sits next to the city of Anthony, Texas, which has a population of about 5,300. There is no physical division between the two communities; you could blink and not realize you’ve driven from one to the other. But the Texas side looks different. Generally speaking, the cars and trucks are just a little bit newer, the houses a bit bigger, the front yards a little greener. The median household income of $35,756 is also correspondingly bigger: $12,378 more Anthony, New Mexico.

Alma and Adolfo Gallego moved here from Juárez to join their three grown daughters in 2008. They bought a house where Alma could help care for her five grandchildren while babysitting for other families in town. After a friend encouraged her to apply for a license, she turned her house into an official day-care center, never imagining that with a state quarantine she would find herself busier than ever.

When local schools were ordered to close, parents who still had jobs suddenly needed a place to drop their school-age children, and the Gallegos’ living room became a thriving neighborhood day-care hub. Now, she envisions expanding the operation. “All I need is to have another person who helps me, but I already have that — it’s my husband,” she said, anticipating the day when Adolfo, who works in construction, will retire.

But as Anthony has reopened for business in recent weeks, many establishments have struggled to regain their footing.

One Monday afternoon in late June, Sol Corral sat idly behind a plastic partition in her empty beauty salon in a deserted strip mall. She stared at her phone.

Corral, 63, has operated Sol’s Beauty Salon for 14 years. During the lockdown, she sat at home feeling depressed as her business sat dark for three and a half months. One day, she stopped by to check on the potted plants, which didn’t help her mood: “There was so much dust, and it looked so sad.”

On June 21, when the state allowed salons to reopen, she unlocked her doors and was greeted by a rush of customers. That lasted two days. On the first Saturday after reopening, she only had four customers.

“They are afraid,” she said.

So are her two stylists. Because of the virus, they aren’t yet willing to return to work.

Corral owes three months in back rent. Her landlord told her, “I’ll wait for you.” Still, she worries. With her workstations sitting empty, she thinks about selling her spare chairs and unused equipment to cover the overdue rent.

Shortly after lunch, two women came in for haircuts. Corral had them wash their hands and asked them to check their temperatures with the electric thermometer she now keeps at the front desk. She slid a transparent face shield over her surgical mask and led the first customer to one of the workstations. She picked up her scissors, and the two began chatting as she got to work.

As the coronavirus spreads across the Southwest, it’s anyone’s guess what the next few months hold in store for Anthony, the one-time colonia that’s tried so hard to modernize and grow.

In the weeks leading up to the reopening, the community was “cabin fever-struck,” according to Herrera. Now “they’re trying to go out there. They’re seeing that their friends or neighbors are not just keeling over and dying, even though they hear it on the TV that there are people dying every day.”

Herrera fears that as the town reopens, there will be serious health consequences: “People that work in El Paso, they’re going to the restaurants and movies and whatever; they’re going to get contaminated. They’re going to come back, pass it on to their families or their friends.”

He worries about his daughter, an emergency room nurse in El Paso.

“She says, ‘Dad, we have two floors of the hospital with people that are dying.’ She’s afraid,” he said. “She’s got three kids. And she’s a single mom. She says ‘Dad, if I get it? I’m broke. I mean, even though I’m a nurse, you know, if there’s no money coming in? What can I do?’”