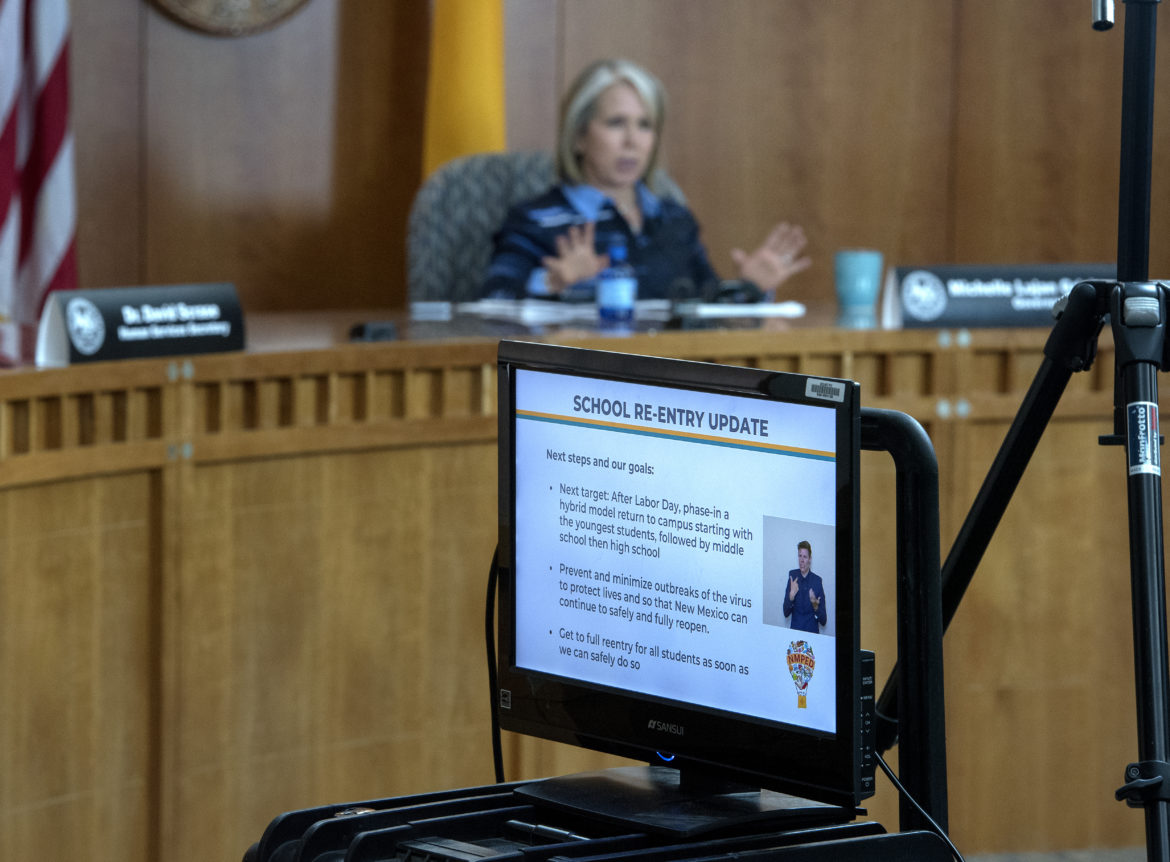 Governor Michelle Lujan Grisham announces school throughout the state must go to a distance learning program to start their school year. This was during her weekly update on COVID-19 in New Mexico and the state's effort to contain it. The news conference was held at the Roundhouse in Santa Fe, Thursday July 23, 2020.

“This pause on in-person reentry is not the same as delaying education support,” Lujan Grisham said.

School districts will be able to work with a remote-learning, or an online-only model, until at least Labor Day. And during that time, the state Public Education Department encouraged districts to aid students in supplies for online learning and provide additional professional development for teachers.

The ultimate goal, Lujan Grisham said, is to have in-person instruction for all students across the state.

“We want to get to full reentry in two ways: All students, all age-groups, all schools,” she said. “And then, the ultimate goal, New Mexico, is to have no hybrid models. Five days a week, all population, all schools.”

There are some small exemptions for in-person instruction.

Students with special needs will be able to attend in-person instruction in small groups or in one-on-one settings with teachers.

“They need both the emotional and physical healthcare supports that were being delivered to them in a school setting,” Lujan Grisham said.

And schools also would be able to have in-person instruction of kindergarten to third grade students, with only five students per teacher. The priority would go to those students most in need of educational support.

But, overall, the governor said the priority was safety for students and school staff.

Additionally, the governor said the state would look to further expand childcare options for working parents through the state’s Public Education and Early Childhood Education and Care departments.

Private schools would not have to abide by the PED decision, but the governor warned that as an organization or business, they still must comply with the state public health order. This includes having COVID-safe practices, including masks, and keeping capacity under 25 percent of fire code.

“They have to meet those standards no matter who you are in the state of New Mexico,” Lujan Grisham said.

When asked if she believed it was safe for private schools to resume in-person operations, she said, “If it was safe, we would make a different decision for public education.”

The governor said she predicted that she would not be the first governor to make the decision to delay in-person instruction.

The reason for the change, said Dr. David Scrase, the Secretary of the state Human Services Department, was because of the change in situations in New Mexico since they spoke about schools in early June.

“If you look at where we are today, we’re in a completely different picture,” he said.

The state Department of Health announced 343 new cases of COVID-19 on Thursday, the highest single-day total since the beginning of the pandemic in New Mexico.

“That in and of itself is not good news,” Lujan Grisham said.

Scrase said it was part of a wider trend in recent weeks in New Mexico.

New Mexico has seen a 123 percent increase in the last five weeks in the seven-day average of daily COVID-19 positive cases, even before Thursday’s numbers were included.

This, Scrase said, put the state “in the zone of the worst we’ve had so far.”

Another number the state is looking into is the average daily rates per 100,000 New Mexicans in the state and in counties. He said that anything over 10 is troubling—and at least a dozen counties in the state also have more than ten.

He also cited a positive test rate of over five percent as a cause for concern, something many areas have exceeded in recent weeks, including by nearly double in some areas.

One area that the state is watching is southern New Mexico, where he said there has been “a lot of activity” but said there is “much broader spread across the entire state.”

And it comes, he said, because  “more people are spending more time outside their homes with other people and longer time interacting. And that’s how COVID spreads, person-to-person interaction.”

Scrase again encouraged New Mexicans to wear masks to slow the spread of COVID-19 and said the scientific evidence that it helps is “quite overwhelming. There’s universal scientific agreement.”

One way that the large number of cases is impacting New Mexico’s response is through contact tracing.

New Mexico Environment Department Secretary James Kenney provided an update on rapid responses that the state provides where an employee has tested positive for COVID-19.

Many of these responses come through NMED under their Occupational Health & Safety Bureau, or OSHA program. Others can happen through the state Department of Health, the Department of Corrections or other agencies with jurisdiction over the place of employment.

He said that there are five elements of the rapid response:

He said that the number of rapid responses was more pronounced in restaurants.

“The rise in positive employees in restaurants has increased fifteen-fold,” he said.

The governor said that to allow indoor dining, it would require things to improve in the state again, and that the state would have to be ready to act quickly.

“Once we do anything in terms of larger capacity for businesses or look at indoor dining, then we introduce risk and we have to manage risk,” she said.

Scrase noted that the state doesn’t use just one measure, like number of total cases, to determine when to ease restrictions.

Still, he said, “It’s common sense that you can’t open things up when you’re at the worst point.”