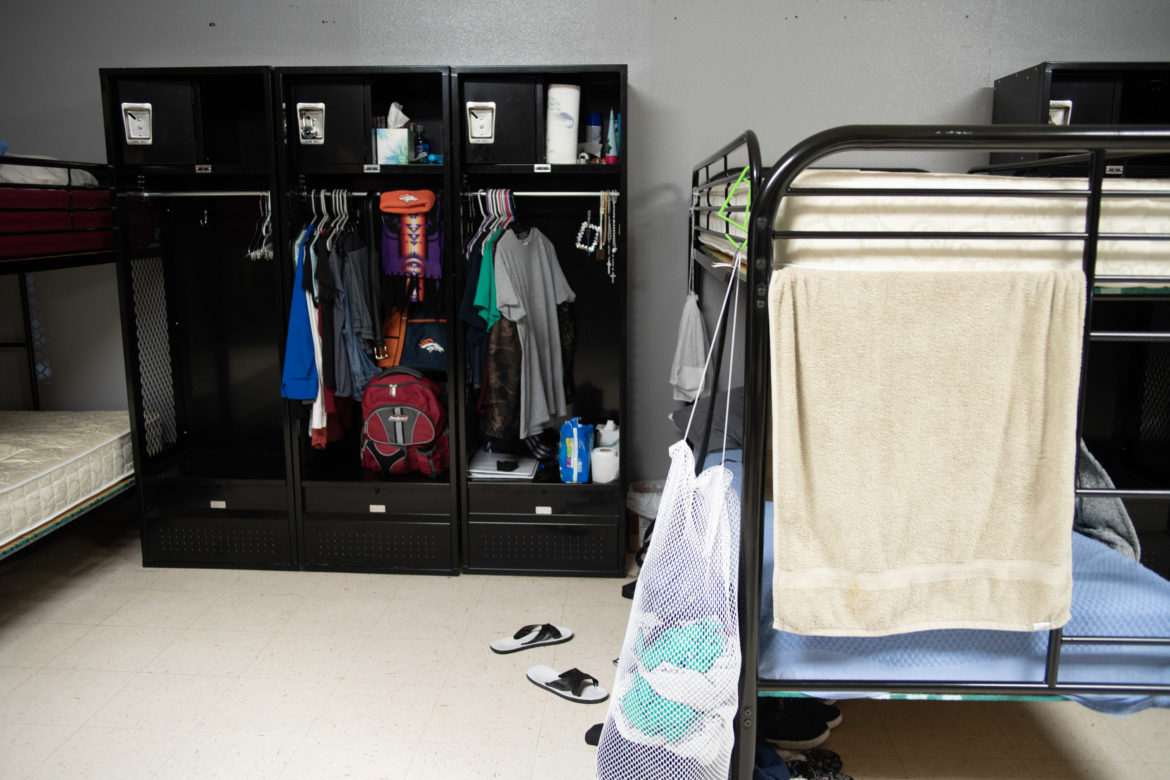 Bunk beds at La Pasada, the only halfway house that takes sex offenders on their way out of New Mexico prisons.

David, 28, was counting the days until January 6, 2012, when his prison sentence would end and he would be released on parole. He had earned his GED diploma inside and lined up some job options in construction and landscaping around Albuquerque. But the date came and went, and still the state kept him locked up.

The problem was housing. There was only one halfway house in the state that would take an inmate like David — a convicted sex offender — and it had a long waiting list. If he wanted to get a bed there anytime soon, David would have to buy his freedom — in cash.

This story originally appeared at Searchlight New Mexico and is republished here with permission.

He was lucky – he and his sister were able to come up with the money. A $600 rent payment jumped him to the front of the line.

“I felt that I was being treated unfair,” he said. “I’d already fulfilled my obligation of my sentence. Why were they giving me such a hard time?”

David isn’t the only inmate in New Mexico forced to choose between staying behind bars or paying to parole more quickly. Two other men told Searchlight New Mexico that between 2017 and 2018, they paid $1,200 to get into La Pasada, a halfway house in Albuquerque. Several inmates at the Otero County Prison Facility, which houses many sex offenders, said they, too, were aware of the pay-to-play system.

“It’s outrageous,” said Matthew Coyte, an Albuquerque civil rights lawyer. “Making money the determination of whether you get released goes contrary to all the principles behind a just criminal justice system.”

Officials with the New Mexico Corrections Department (NMCD) and La Pasada acknowledged that the arrangement existed.

“Some people can afford to get out — pay to get out,” said Daryl Agnes, La Pasada’s director. “Some people cannot. Which one is fair?” When asked to answer his own question, Agnes said: “There’s no good answer.”

When it comes to releasing sex offenders on parole, New Mexico has few good answers.

The sex offender label is broad and lumps together people who have been convicted of wildly different actions. Under New Mexico law, the term can describe a 19-year-old who had consensual sex with a 15-year-old as well as a person who violently raped a young child. David was sentenced to four years after being convicted of second-degree criminal sexual penetration of a 15-year-old when he was 23 (at the time, he said, he was under the influence of alcohol and cocaine). Searchlight is referring to him only by his first name because of societal stigma.

All sex offenders sent to New Mexico state prisons are required to be on parole, and they can’t get out of prison until the NMCD and the parole board approve their planned residence. While New Mexico’s laws, unlike those of many other states, do not actually restrict where sex offenders can live, state policy does.

Sex offenders on probation or parole are required to sign a contract saying they will only reside in places the state has inspected “for appropriateness” — a vague term that gives the government almost complete power over their residence. NMCD regulations further forbid them from living within 1,000 feet of “an area where children may frequent” — meaning a school, day care, or community center, among other places.

In effect, La Pasada was his only option.

La Pasada remains the only halfway house for sex offenders coming out of state prisons. Normally, the state pays the $1,500 rent for the first month or two. But due to limited funds and beds, the waitlist is lengthy; in early July, 89 people were on the list, according to the NMCD. Many of those people are still serving prison sentences.

Inmates eligible for parole were given the option of paying rent themselves. If they took that path, they move to the front of the line.

This arrangement was part of a larger problem that affects New Mexico inmates convicted of all sorts of crimes. As of July 7, 90 inmates across the state had completed their prison sentences but haven’t been released. They are serving “in-house parole” – chipping away at their parole terms while remaining incarcerated; 20 of them were convicted of sex crimes, said Eric Harrison, an NMCD spokesman.

This is particularly concerning during the novel coronavirus pandemic, which has devastated the Otero County prison, a privately-run facility that houses many of the state’s sex offenders. More than 700 inmates have contracted COVID-19, and five have died.

“This is not just a New Mexico problem; this is happening throughout the country,” said Allison Frankel, an attorney with Human Rights Watch and the American Civil Liberties Union. “People with financial means are able to get out of custody, but those who are poor remain locked in a cage.”

In 2015, a report in Nevada found that some inmates — not just sex offenders — were kept behind bars simply because they couldn’t afford the halfway house. An Illinois federal district judge ruled in March 2019 that Illinois’ system was illegal and discriminatory because it kept indigent sex offenders imprisoned after their sentences had been served.

New Mexico’s prison system has come under scrutiny in the past for keeping people incarcerated if they couldn’t afford to rent a room in a halfway house. In 2012, the Albuquerque Journal reported that inmates were required to come up with one month’s rent to be set free; NMCD removed the requirement after a Journal reporter started asking questions.

But a similar sort of arrangement remained in place for people convicted of sex crimes.

Ruben Chavez, La Pasada’s executive director, explained the rationale: The state was holding people who were eligible for release, so Chavez allowed them to pay their own way and get out of prison in a timely manner. He said he got the same amount of money regardless who paid – the state or parolee.

Chavez said he scrapped the policy shortly after being contacted by Searchlight, adding that the change had nothing to do with this article. “It’s something that we were looking into before,” he said. “It’s such a hassle, in the past, that we decided not to do it.”

54 bites on one foot

La Pasada, founded in the 1970s, has a long and troubled history. In 2014, its former executive director, Robin Cash, was sentenced to federal prison for embezzling the facility’s funds and failing to file tax returns. A 2015 state inspection found a broken air circulation system, dilapidated furniture, and an infestation of bed bugs — pests that residents had complained about for years.

“I had 54 bites on one foot,” said Alex, a 2012 resident, who asked to be identified by his first name only. “Sixty-three bites on the other.”

Subsequent inspections showed improvements, and Chavez poured money into upgrades. In 2019, the facility built a $700,000 kitchen, which serves three meals a day  and provide residents the opportunity to learn about food service. On a Friday in March when Searchlight visited, dinner was carne adovada with pinto beans, roasted potatoes, roasted onions, and tortillas on the side. Dessert was chocolate pudding.

Accommodations were spartan; most residents slept in bunkbeds, 10 people to a dorm.  Each set of two dorms shared a bathroom. In total, the space can hold 120 people, Chavez said, but he caps it at 110.

In 2018, David returned to prison. Once again, money freed him.

It was a convoluted series of events that landed him back in prison. The state claims he violated the terms of his parole by lying about where he lived; he says he wasn’t even supposed to be on parole at the time. He’s suing the parole board over the dispute.

This time, David had to pay $1,200 to get out on time. He was told that if he didn’t come up with the money, he might languish in prison for up to two years.

And just like the first time, he had the benefit of financial resources.

Still, he knew it wasn’t right for his fellow inmates to remain behind bars simply because they couldn’t afford to pay for the get-out-of-jail card.

“If I would have had the money, I would have paid for a lot of people to get out of prison,” David said. “It’s not fair that [the state] can sit here and basically pick and choose when they want to release people.”