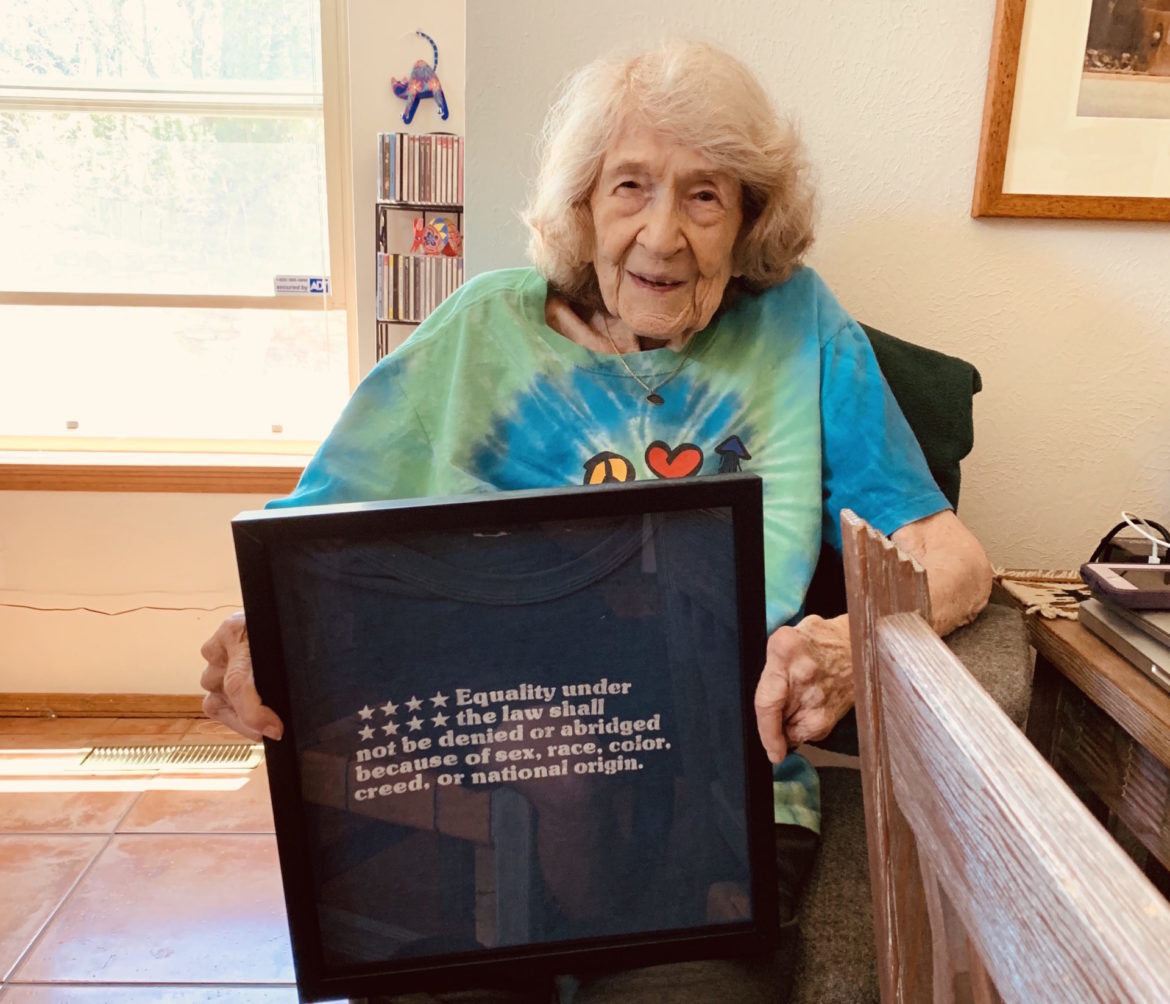 Roslyn K. Pulitzer drew her final breath holding the ungloved hand of Kay Lockridge, her partner of 36 years, on the morning of Thursday, April 30, at the University of New Mexico Hospital’s intensive care unit in Albuquerque.

“Roz knew I was there, although she couldn’t talk because of her breathing apparatus and mask,” Lockridge said. “She winked at me and squeezed my hand.”

Pulitzer was the first Santa Fe resident to die of COVID-19, according to the New Mexico Department of Health. She had turned 90 years old the previous Saturday but Lockridge couldn’t celebrate with her in person because Pulitzer was in quarantine for COVID-19 at the Advanced Healthcare Center of Albuquerque.

In February, Pulitzer fell and fractured several ribs. At Christus St. Vincent hospital, in Santa Fe, clinicians discovered a previous vascular bypass surgery had begun to fail and she needed a new surgery to avoid losing her leg.

The two would have chosen a different place had they known COVID-19 was lurking there, Lockridge said. At least one case had already been identified at the facility by then — but that simple, crucial fact wasn’t conveyed to Lockridge and Pulitzer. And they were not the only ones initially kept in the dark about AHC’s COVID-19 outbreak.

People like Pulitzer — elderly and over 80 years old — have accounted for four of every 10 people who have died of COVID-19 in New Mexico, according to daily numbers released by the state.

As of July 28 in New Mexico, according to data provided by the Health Department:

Nationwide, the New York Times reported last month that at least 55,000 nursing home residents and employees had died of COVID-19, of nearly 300,000 infected at 14,000 congregate living centers for the elderly.

In short, the nursing home and long-term care industry has been the center of a viral tidal wave of death.

To hear some in the industry tell it, it was inevitable, unavoidable. Few are willing to discuss their own failures to plan — or their industry’s lobbying, exposed by New Mexico In Depth, the Raleigh, N.C. News & Observer, and ProPublica, to block and roll back federal requirements that elder care facilities prepare pandemic response plans.

And the industry’s and state governments’ secrecy about COVID-19 outbreaks and patient deaths has made headlines across the country. We’ll never know how many of the people killed by COVID-19 at nursing homes could have been saved had approaches to  planning, prevention, or transparency been different.

Pulitzer was a native New Yorker. Born in the Bronx and raised in Queens, she spent most of her adult life in Manhattan, until she moved with Lockridge to Santa Fe in 1997.

As a young woman, Pulitzer was a nightclub photographer in Greenwich Village and worked as a medical lab technician at the VA hospitals in Brooklyn and, later, in Manhattan. In the 1960s and 1970s Pulitzer was involved in New York’s women’s rights movement, working with Gloria Steinem and other feminist leaders, according to Lockridge. She earned her Master of Social Work (MSW) degree at Fordham University and worked as clinical supervisor of social workers at Beth Israel Hospital’s substance abuse program.

“She also developed a part-time private psychotherapy practice,” Lockridge said – work she continued until the couple moved to Santa Fe.

The two had met at a non-profit community group in early 1983 and became partners in early 1984. They married in Vancouver, British Columbia during an Alaskan cruise but were married a second time in Santa Fe, by a municipal court judge in August 2013

When they moved to Santa Fe in 1997, Pulitzer considered continuing her psychotherapy practice. “But the wonderful light and beauty of Santa Fe stirred Pulitzer’s old interest in photography and she became a fine art (landscape) photographer,” Lockridge said in an email.

“…she traveled extensively throughout Africa, Europe and the United States, including Hawaii and Alaska, always with a camera in hand and usually processed and developed her own photos,” Lockridge said. “[O]ne of her photographs graced the cover of the book, Visions of Santa Fe, and another was published in the book in 2005—and had works shown at the former LewAllen Gallery [in Santa Fe] and the Harwood Museum of Art in Taos.”

“She was always in some level of pain and could endure way more than I ever could,” Lockridge said.

Lockridge said she and Pulitzer had been assured that AHC had no COVID-19 cases prior to Pulitizer being admitted.

In reality, however, an outbreak was by then already under way at AHC, according to current and former employees and records obtained by New Mexico In Depth.

Like dozens of other nursing facilities overtaken by the virus, AHC has a coveted “5-star” rating by the U.S. Centers for Medicare & Medicaid Services (CMS). The star rating uses a secretive scoring algorithm meant to reflect things like quality of patient care, staffing levels, infection rates and recent inspection findings. Five-star ratings figure prominently in nursing homes’ marketing materials, and they reassured patients and their loved ones.

AHC had struggled with infection control in the past, including outbreaks of norovirus and Clostridium difficile gut bacteria, according to current and former employees and government inspection reports. But regulators did little to hold the facility accountable. A review of a decade’s worth of those records revealed no fines levied by regulators, even for violations inspectors believed to have placed dozens of patients at risk.

AHC’s emergency response plan and training prepared staff to handle the evacuation of residents during a building fire. But it did not have a pandemic preparedness plan when the coronavirus that causes COVID-19 began its rapid spread around the globe.

On April 3 and 4, an elderly patient had coughing fits and developed a fever. Staff quarantined him in his room and tested him for COVID-19. His positive test result came back April 5, Palm Sunday, according to staff.

A second patient was tested Sunday or Monday as well, with a positive test result coming back Tuesday, April 7, records show – the day Pulitzer arrived from Christus St. Vincent. Christus told Pulitzer and Lockridge repeatedly between April 5 and April 7 that AHC had no COVID-19 cases, according to Lockridge — and AHC did not alert her or Pulitzer to the presence of COVID-19 cases when Pulitzer arrived at their facility, she said.

“…[W]e had only one question of Advanced Health Care of ABQ: Was the facility COVID-19-free as of April 7, when Roslyn would arrive,” Lockridge wrote in a June 1 letter to the AHC parent company, complaining about the facility’s lack of transparency. “Discharge personnel at Christus St. Vincent Medical Center in Santa Fe were assured by a representative of AHC that the facility had NO cases of COVID-19 both before and at the time of Roslyn’s admission. The assertion from your facility that it was virus-free before and on April 7 was false.”

Ultimately, the lack of that information led to Pulitzer’s death, Lockridge contended in her letter to the company. “[W]e would never have sent her to AHC if we had known the truth,” she wrote.

AHC administrator Edwardo Rivera did not return phone calls for comment for this story. An email and calls to the parent company received no reply.

April 7, the day Pulitzer arrived at AHC, was also the day nurse Carole Welch, having grown suspicious that administrators were not reporting the facility’s recently detected COVID-19 cases to the state, called the DOH herself, to tell them what was going on. A DOH representative confirmed they did receive a whistleblower complaint, and that they first confirmed COVID-positive test results at AHC on April 10. (The DOH didn’t begin publicly announcing which facilities had positive cases until April 10.)

Lockridge herself didn’t learn of the outbreak until Monday, April 13, she said. That’s when Rivera finally called to say nine patients and two employees had tested positive and that Pulitzer would be tested.

It was the last time Rivera and Lockridge would speak, despite Lockridge’s subsequent calls and voice messages, she said.

Waiting to share information is not unusual for nursing homes and assisted-living facilities. Even before the COVID-19 pandemic, the industry’s secretiveness and lack of accountability made headlines.

Ultimately, 24 AHC employees would test positive in the spring. Eighteen residents caught COVID-19 and eight died. Pulitzer was the first.

Other patients’ loved ones told New Mexico In Depth they had not been immediately informed of the AHC outbreak, either.

At least two families first learned of the outbreak from news reports. Susan Carswell, whose mother was at the facility, had been checking the state DOH COVID-19 website and was distraught to see AHC mentioned there over the Easter weekend. “I immediately emailed corporate, but got no response,” she said. A few days later, Carswell’s brother texted to tell her their mother was COVID-positive. Nobody from AHC had informed the family.

On April 14, AHC nursing director Jennifer Ward called to tell Lockridge that Pulitzer had again tested negative for COVID-19. But on April 22, Ward called back. Pulitzer had tested positive for the coronavirus and had been moved to the facility’s “pure positive” COVID wing.

“It was really difficult,” Lockridge said. “We’d been together for 36 years and this was the longest we’d ever been apart.”

Unable to celebrate Pulitzer’s 90th birthday together, they spoke by phone instead.

They spoke again the next day, Sunday, April 26.

But Lockridge could not reach Pulitzer on Monday.

Then, at 1 p.m. on Tuesday, April 28, Lockridge’s call to Pulitzer’s phone was answered by an AHC staffer, who said Pulitzer was being transferred by ambulance to UNM Hospital’s emergency department.

Nobody from AHC had called to tell her, Lockridge said.

Lockridge spoke with UNM physicians repeatedly that Tuesday afternoon and evening. She conveyed Pulitzer’s wish not to undergo “extreme measures.” They told her Pulitzer was being admitted to the ICU. At 9:30 p.m., Pulitzer had called to tell Lockridge she was okay and they were “working on her breathing,” Lockridge recalled.

“If we had known they had a case, Roz wouldn’t have gone there,” Lockridge said. “I wish we’d known.”

Lockridge wants to hold a memorial service at some point after COVID-19 travel and social distancing restrictions are lifted.