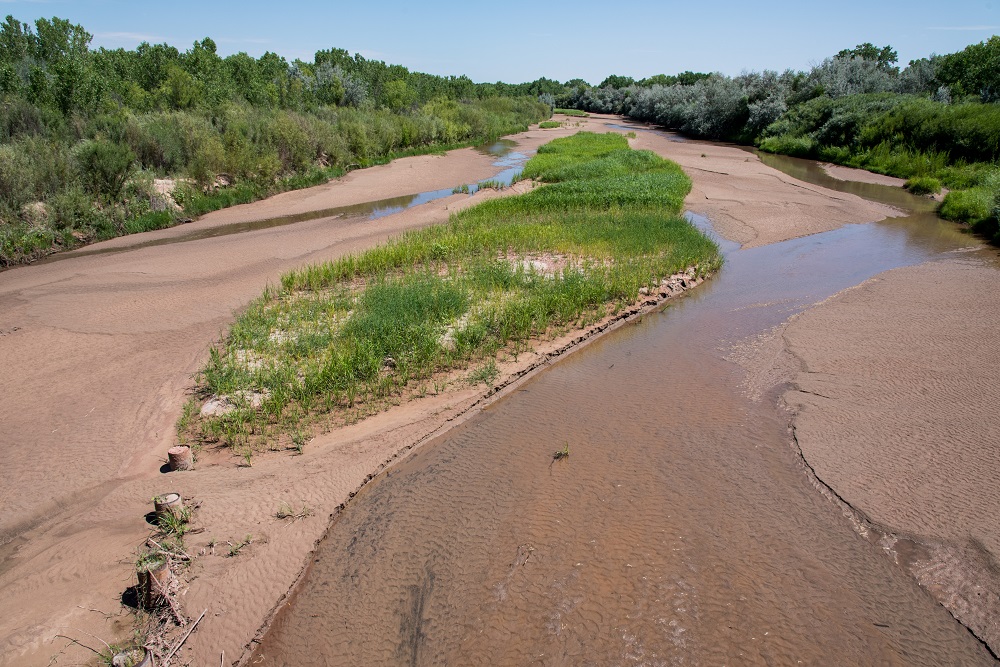 Audubon New Mexico water was released into the Rio Grande near Bernardo in Socorro County in 2018.

Actor and author Will Rogers once famously described the Rio Grande in the 1930s as “the only river I saw that needed irrigation.”

“That’s kind of what we’re doing,” said Mike Hamman, CEO and chief engineer at the Middle Rio Grande Conservancy District (MRGCD), as he described how the district is working to ensure water remains flowing in the Rio Grande in what’s shaping up to be one of the driest years for the river in decades.

The MRGCD is a member of the 2016 Biological Opinion partners, a group of entities that have agreed to manage the river in a way that doesn’t jeopardize three threatened and endangered species that are dependent on the river for survival. Under that framework, the MRGCD helps manage water coming from different sources as it moves through the MRGCD system.

Part of that agreement includes putting water back into the river downstream, essentially “irrigating” it.

“We have committed to do various things, and one of them is to operate the river in a way to minimize drying,” Hamman said. “We take certain blocks of water, we move them through our system and we put them in at various points downstream of Isleta Diversion Dam, called outfalls.”

Outfalls are channels that divert water. Hamman said there are six different outfalls attached to the MRGCD irrigation system that feeds water back into the Rio Grande.

This year has been a challenge for everyone who relies on the river: humans, plants and animals alike. Water managers are doing all they can to keep as much of the Rio Grande wet as possible. After a dry and warm spring and little runoff, the Middle Rio Grande would have run completely dry between Cochiti Dam and Elephant Butte Reservoir, if not for some early releases of water stored in upstream reservoirs.

The Albuquerque Bernalillo County Water Utility Authority (ABCWUA) decided to stop diverting water from the river for the year, instead relying on groundwater pumping to supply drinking water to the utility’s customers.

Then, in mid-July, the conservancy district announced it would run completely out of water unless more was released from upstream reservoirs. ABCWUA contributed 10,000 acre feet to the conservancy district. The district was able to tap into some San Juan-Chama water and state water managers were able to secure an emergency deal sending 38,000 acre feet from the El Vado Reservoir down the river.

These types of deals between irrigators, water rights holders and water managers are not unusual in dry years to help shield irrigators from crop losses and comply with water flow requirements established by the U.S. Fish and Wildlife Service to help protect species such as the silvery minnow.

But in recent years, the nonprofit conservation group Audubon has taken upon itself the task of being a “public voice” for the river and its species – inserting itself as an NGO partner for the 2016 Biological Opinion, and even acquiring water rights of its own.

“Making it through dry periods like this is a very critical part of keeping this river alive,” Tashjian said, adding that water management on the Rio Grande has “largely been done by government agencies.”

“They’ve been doing wonderful work. But if it’s just the government agencies, what happens when the federal government stops prioritizing it?” Tashjian said. “We’re trying to have more of a public voice for the river. We want to team with these other partners working on the river, and assist with that. We think having a non-profit on the scene is a really important part of that moving forward.”

Audubon New Mexico began leasing small amounts of water from a few pueblos initially in 2016, and later expanded to leasing water from municipalities and even the Santa Fe golf course Las Campañas. The water itself is all San Juan-Chama water, which Tashjian said Audubon leases at-cost.

The amount of water Audubon leases isn’t huge. The group secured 250 acre-feet of water per year for the next eight years. But every little bit seems to help.

“It’s like trying to patch dry years,” Tashjian said. “In wetter years we’re storing it, we want to save it up for drier years.”

In July, Audubon released 530 acre-feet of water into the Rio Grande near Los Lunas. Tashjian estimates it was enough to keep a 25 mile stretch of river wet for about a month. The release was “tightly coordinated” with water managers “to ensure effective and efficient use,” according to a statement from Audubon New Mexico. It was the third year since 2016 that Audubon has released some of its water to help maintain flows in dry stretches of the Rio Grande.

Audubon New Mexico is working with the MRGCD to integrate its water releases into MRGCD’s water management obligations under the 2016 Biological Opinion.

“It’s a really cool strategy they’re developing, it’s called the string of pearls concept,” Tashjian said. “You can kick water back in at these select places to keep the river alive enough during these dry times.”

“For Audubon, it’s about the different birds that are nesting there, and we want to make sure there’s enough flow there and try to make it to monsoons,” he said. “A lot of bird species are riparian species that evolved around flowing rivers, and nest in the willows and cottonwoods around the flowing water. Their whole ecology is dependent upon that – the bugs, the water. If it dries out, those species really get impacted.”

He said unusually dry years like this year can be devastating to a whole generation of birds.

“They nest in May and fledge in June. If it dries up, then the food resources tank, and things really cook, you have much less success for fledgling birds,” he said. “We want to keep enough water there to support them.”

Squeaking by this year

That 530 acre-feet has run its course by now, but thankfully, the state has seen some wet monsoon weather.

“On a year like this, if the rains shut down we’d be in a world of hurt come mid-September,” he said. “Like the farmers, we’re hedging our bets and hoping there’s going to be enough rain to pull through the year. In 2018, that worked, and we’re hoping it works this year as well.”

There’s some indication it might. The rains have helped ease the water scarcity burden for both the river and irrigators, Hamman said.

“We actually ran on nothing but rain for the better part of five or six days. And we’re still benefiting from it down south right now,” Hamman said. “It looks like we’re all going to squeak by this year from a water supply perspective.”

“I think the river is going to do pretty good too,” Hamman said. He added that the MRGCD and its partners are going to purchase another 12,000 acre-feet from the ABCWUA this month, “so that we can keep the river going even after we stop irrigating.”