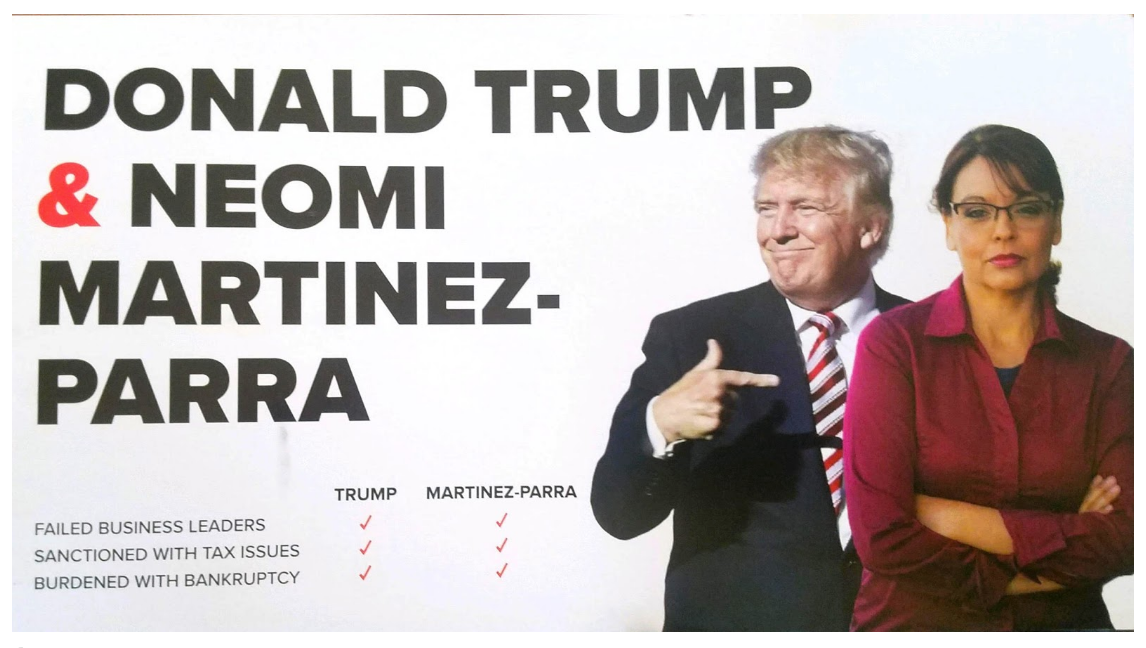 A negative mailer that was mailed to voters by CCNM. Image courtesy of Danny Maki, campaign manager for Martinez-Parra.

Over the course of May and early June this year, a new group called the “Council for a Competitive New Mexico” (CCNM) spent over $130,000 on a media campaign supporting a group of incumbent state senators, most of whom would go on to lose as part of a progressive wave in June’s Democratic primary.

The media campaign included several negative mailers and automated phone-calls against candidates opposing the incumbents while the public was left in the dark about who organized the group and who funded the media campaign.

This story originally appeared at New Mexico In Depth and is republished with permission.

Now, an ethics complaint filed this week with the Secretary of State’s office alleges that CCNM broke New Mexico’s election code by not disclosing its donors.

Neri Holguin, campaign manager for two of the candidates who won during the June primary, Siah Correa Hemphill and Pam Cordova, writes that the group may have violated the New Mexico Elections Code by not reporting who paid for the negative advertising and phone calls against those candidates as well as others.

“It was a deliberate attempt to make it as difficult as possible for voters to know who’s behind these hits on our candidates,” said Holguin in an interview. “They knew the rules enough to file as an independent expenditure (IE) and to list their expenditures, and so why not list contributors?”

“Voters need to know that, and we have no way of knowing that right now,” said Holguin.

At the core of Holquin’s complaint is a new state law that triggers certain groups to disclose publicly and quickly who the donors are that paid for their electioneering activities if the costs are larger than a state-prescribed threshold.

Holguin said she believes CCNM was created by a group of people, including prominent New Mexico lobbyist Vanessa Alarid–whom she mentioned by name in the complaint–that have used similar tactics in recent years to influence elections at the local and state level without disclosing publicly who is funding the activities in a timely fashion.

Chevonne Alarid, the president of the nonprofit group, however, said disclosure isn’t necessary  until it files its annual report to the Internal Revenue Service. In addition, she and Vanessa Alarid both denied Vanessa’s involvement. An unnamed representative of the Council for a Competitive New Mexico said in an email the group was in compliance with state law.

The disagreement offers a glimpse into an ongoing debate over how to ensure the public knows who is behind negative political messaging at a time when vast amounts of political spending is going undisclosed across the country.

CCNM’s media campaign during the primary included a mixture of negative ads targeting challengers and positive ads supporting the incumbents they opposed. A search of the Secretary of State’s independent expenditure portal shows that while the group did report its expenditures, it didn’t disclose the donors behind the effort, leaving the public in the dark about the interests of those behind the media campaign.

The group filed registration documents on March 11 with the Secretary of State listing three individuals associated with the organization: Chevonne Alarid, Adam Silverman, and Kelli Monnheimer. The group hired Lincoln Strategy Group, an Arizona-based campaign firm aligned with the Republican Party. Nathan Sproul, founder of the group, previously served as the Executive Director of the Arizona Republican Party.

But otherwise, there is little information about the group on its website or elsewhere, about who is responsible for or funding its electioneering activities.

“We must actively explore continued economic diversification, drive increased job growth and demand reforms to our tax structure,” reads the website, alongside references to New Mexico’s oil and gas sector and “key policy leaders” who have “wisely fought for fiscal discipline.”

Sen. John Arthur Smith, D-Deming, the chair of the Senate Finance Committee and generally regarded as a fiscal conservative, was defeated by progressive challenger Neomi Martinez-Parra in June.

Simultaneously, the group spent money, according to its reports, on negative attacks against those hoping to unseat Smith, Martinez, Ramos and Sanchez — Martinez-Parra, Leo Jaramillo, Siah Correa Hemphill and Pam Cordova, respectively. The group also ran negative automatic phone calls to voters, or “robo-calls”, with one call claiming that “outside groups dedicated to tearing down other Democrats,” were supporting Correa Hemphill against her opponent, Sen. Gabriel Ramos.

The group flooded mailboxes with mailers. For instance, in May, CCNM sent negative mailers to voters comparing Martinez-Parra to President Donald Trump.

Asked numerous times via phone and email, representatives of the Council for a Competitive New Mexico declined to disclose who had funded the campaign.

“As a newly formed 501c(4), we will follow all applicable laws, public disclosure requirements and filing timelines, as outlined by the Internal Revenue Service and the Secretary of State, as applicable,” wrote a representative of the organization in an unsigned email.

Reached by phone, Chevonne Alarid, who is registered as the President for the organization, said she didn’t have much information about the group.

“I am titled the President, but I likely don’t have the information that you’re requesting,” she said on Friday. She later referred New Mexico In Depth to Adam Silverman, secretary of the group, for further information.

Silverman, who is the Vice President of the Albuquerque-area real estate developer Geltmore, LLC, declined to talk on the phone for this story, instead redirecting inquiries to an email account set up by the organization.

“The Council for a Competitive New Mexico has complied with the requirements of NMAC 1.10.13.11(C) in its filings,” the group subsequently stated in an unsigned email from that account.

Chevonne Alarid said the group would file an annual report required of nonprofits. “It’s an allegation that would likely have no basis,” she said of the ethics complaint.

While Alarid was referring to federal IRS rules governing disclosure by 501(c)4 organizations, the ethics complaint alleges the group violated state election laws. Those laws require groups not registered with the state as political action committees that spend over a certain amount of money to influence elections to disclose their expenditures and donors within days of the activity.

Citing the state laws, the ethics complaint emphasizes that the nonprofit group’s spending falls under the state’s definition of such independent expenditures, and that because the spending exceeded $3,000, donor disclosure is required.

“Over $100,000 got spent on these elections, very close to the election, and in ways that are not easy for voters or campaigns to know who was behind them,” said Holguin.

Potential penalties named by the complaint include a civil penalty of up to $20,000– $1,000 per violation– as well as a misdemeanor if it can be shown that the group “knowingly and willfully” violated New Mexico’s election code.

“The Secretary of State takes allegations such as these very seriously and all complaints received by our Office go through an internal process to determine if a violation has occurred,” wrote spokesman Alex Curtas in an email. “We will review the allegations, pull any internal documentation or reports we may have and do a thorough analysis.”

Curtas said that if the complaint required further investigation, the Secretary of State will make a referral to the State Ethics Commission.

In her ethics complaint, Holguin wrote that she believed Vanessa Alarid is involved with CCNM. In a text message, Holguin pointed to close connections Alarid has with those running the CCNM group as well as similar groups that ran negative media campaigns in two other recent elections.

“Vanessa Alarid is a lobbyist who goes to great lengths to protect the interests of her corporate clients, namely the real estate conglomerate Western Albuquerque Land Holdings, the owners of the controversial Santolina development,” Holguin said in the text message. “It seems she is often separated by one degree to PACs or IEs (independent expenditure) that go aggressively after candidates that oppose Santolina’s wishes.”

A prominent New Mexico lobbyist, Vanessa Alarid has long advocated for development interests in Albuquerque.  Currently she is registered with the state as a lobbyist for both Garrett and Winrock Partners, LLC. She denied her involvement in CCNM in a text message, and declined to comment further.

Holguin referenced the June primary and elections in 2016 and 2017, in which new groups with generic, innocuous names abruptly appeared near the end of the election period and ran large negative media campaigns, and for a period of time the public was left in the dark about the interests behind the ads.

Most of that money came from Western Albuquerque Land Holdings and its asset manager, Jeffrey Garrett, but the public didn’t know that until final disclosure reports were filed a month after the election. A lobbying report she filed more than three months after the election clarified Vanessa Alarid donated the bulk of the money to New Mexicans for New Mexico on behalf of Garrett Development Corporation.

Pedroza, an opponent of the controversial Santolina development, was ultimately defeated by Quezada.

The group’s treasurer, Donna Madrid-Taylor, told New Mexico In Depth in 2016 that the group had “accomplished what we were setting out to do” and was shuttered.

In 2017, a group called Make Albuquerque Safe began running negative TV ads and prominent billboards against Tim Keller, then a candidate for Albuquerque mayor. New Mexico in Depth reported in 2017 that Garrett Development Corporation contributed half of the $60,000 spent by the group. At that time, Vanessa Alarid was registered with both the City of Albuquerque and the state of New Mexico as a lobbyist for Garrett.

The group ran the ads about a week before campaign disclosure statements were due, and over the course of that week did not provide any information about who was behind the group, leaving the public in the dark initially.

Holguin has found herself on the opposite side of those efforts. A longtime Democratic campaign manager, she headed up an independent group called ABQ Forward Together that supported Tim Keller in the 2017 Albuquerque mayoral election. In 2016, Holguin was the campaign manager for Pedroza, Quezada’s primary opponent for a seat on the county commission.

Beyond her role as a lobbyist for Garrett, and in the case of the 2016 election, donating money to a committee on his behalf, Vanessa Alarid had other connections to the groups.

Madrid-Taylor, listed as the treasurer for both Make Albuquerque Safe and New Mexicans for New Mexico, worked at the time as a paralegal in the law offices of Jason Alarid, Vanessa Alarid’s first cousin (In a brief phone call Wednesday, Madrid-Taylor emphasized that she is no longer involved with the groups and now works solely as a realtor).

Alarid has similar family connections to the Council for a Competitive New Mexico.

In a text message, Vanessa Alarid clarified her relationship with Chevonne and denied any involvement in CCNM.

“She married my cousin and I know absolutely nothing about the CCNM. Neverheard [sic] about it,” she wrote. That cousin is Jason Alarid, who shares a downtown Albuquerque office space with his wife Chevonne’s own consulting firm, CLA Consulting.

Jason Alarid did not respond to a request for comment for this story. Chevonne denied Vanessa’s involvement in the group, as well.

Holguin said she hopes an investigation by the Secretary of State will shed light on who funded the political advertising. As for Alarid’s denial, she seemed skeptical. “The treasurers or listed agents for several PACs have been relatives or friends of relatives of Alarid’s,” she said. “Is it a coincidence? Maybe. But probably not.”