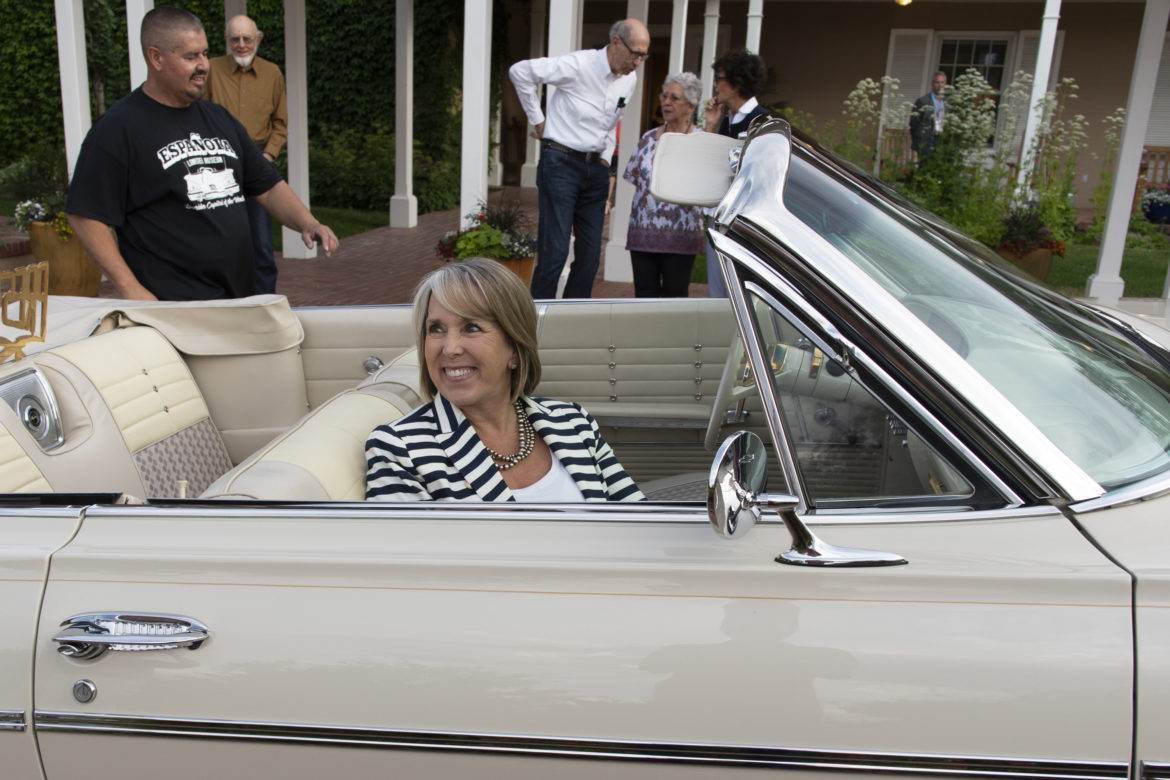 Governor Michelle Lujan Grisham sitting in Fred Rael's award-winning lowrider at the Governor's Mansion last July. The governor was hosting a gathering of secretaries of state from across the nation.

When Michelle Lujan Grisham was a representative in Congress, she often shared a commute with Beto O’Rourke. They met up on connecting flights to D.C., sometimes in the Dallas airport, sometimes in Chicago.

O’Rourke, the former Texas congressman, recently recalled the conversations with his “good friend” Michelle, describing her “singular skill in getting you to laugh or take a step back from a really intensive conversation and remember that, hey, we’re all in the same boat here…I just found that to be so effective in building trust with people from both sides of the aisle.”

Today, Lujan Grisham once again finds herself within arm’s reach of the national stage — this time as Democratic presidential candidate Joe Biden’s possible running mate. Biden is vetting her alongside such high-profile figures as U.S. Sen. Kamala Harris and former National Security Advisor Susan Rice. Lujan Grisham’s place on the list is a testament to the political savvy and policy chops of the country’s first Democratic Latina governor.

With a long career in local, state, and national politics, Lujan Grisham has consistently demonstrated she’s not afraid to challenge the status quo, even if it means ruffling a few feathers along the way.

“She is both a reflection of political change that has been developing for several decades, as well as being a trailblazer,” said Christine Sierra, professor emerita in political science at the University of New Mexico.

The last few months have been good to Lujan Grisham — in part due to her adept handling of the COVID-19 pandemic. In April, the New York Times lauded her performance in an article that evinced surprise that such a poor state could actually do a good job slowing the spread of the disease. She’s lately been making the national media circuit, giving lengthy interviews to the Washington Post, Rolling Stone, ABC and CNN.

At the same time, she and her communications staff have ignored numerous interview requests from Searchlight New Mexico. Direct phone calls to the governor went unanswered; a full voicemail box precluded leaving a message.

Many described her as a knowledgeable and assertive politician but also pointed out that she hasn’t been in the governorship for that long, making it difficult to evaluate how she handles the role of chief executive — a pertinent quality for the leader of a state and certainly for someone who would succeed the president were he to die or become incapacitated. In Washington, Lujan Grisham was also known for her sense of humor and love of the prank — stocking the toilets of her fellow lawmakers with goldfish, booby-trapping her aides’ chairs with air horns.

While women of her physical stature are often underestimated, the 4-foot-11 governor has proved to be a political powerhouse, fueled in part, according to the Santa Fe New Mexican, by 30-plus cups of coffee a day. She’s well aware of her appearance and is rarely seen in public without her New Mexico silver necklaces and Zia pendants.

For decades, she has understood the value of efficiency, and making sure the right people are sitting at the table — proverbially and literally. By changing the structures of government, she has been able to shape who has power and whose voices get heard.

After graduating from UNM’s law school, Lujan Grisham’s first state job was head of the Agency on Aging, an executive-branch office that oversaw services for the elderly.

And what she found was a mess.

Back then, in 1991, individual senior programs appealed directly to the legislature for funding, putting lawmakers in the tough spot of having to choose which got state dollars, according to her then-deputy, Gene Varela. Lujan Grisham decided to consolidate the requests and present the legislature with a single ask.

Her agency brought hundreds of seniors to the Roundhouse to advocate for the funding; state employees provided the talking points. The resulting system proved so successful that between 1992 and 2003 the agency’s budget increased by about 60 percent, documents show.

When Lujan Grisham doesn’t get what she wants, she doesn’t shy away from taking unconventional measures. In 1997, she and Doug Calderwood, an ombudsman in her agency, launched an undercover investigation of elder-care centers. Calderwood said he pretended to suffer from alcohol-related dementia, while Lujan Grisham faked a stroke. They then checked into a couple of facilities to see what kind of care they would receive.

Throughout Lujan Grisham’s stay, nobody brushed her teeth, and none of the aides who dressed her and escorted her to the bathroom ever introduced themselves. “I only stayed for three days, but it was a long damned three days,” Lujan Grisham later said.

In 2004, Lujan Grisham became health secretary for then-Gov. Bill Richardson. James Jimenez, executive director of New Mexico Voices for Children, remembers her well. He served as secretary of the Department of Finance and Administration before becoming Richardson’s chief of staff.

“She was kind of a pain, but only in the sense that she was a terrific advocate and didn’t want to let go until she knew that she absolutely had to,” Jimenez said. “I really respected her; I really did.”

As health secretary, Lujan Grisham contended with a flu vaccine shortage and a federal inquiry into a state-run medical center. In 2007, she resigned from her post, calling it the “hardest job on the planet.” Recently, she’s said that her experience running the Department of Health enabled her to respond quickly and decisively to the current pandemic.

The next year, Lujan Grisham ran for Congress in New Mexico’s first district, a geographically small but populous part of the state that includes most of Albuquerque. She lost. In 2012, she tried again.

“She wasn’t a favorite,” said Virginia Scharff, professor emerita of history at UNM. To be chosen as the Democratic contender, Lujan Grisham had to defeat Marty Chavez, a former state senator and Albuquerque mayor, and Eric Griego, also a former state senator. Three months before the primaries, at the party’s nominating convention, she came in third, with only 26 percent of the delegate votes. She lagged in fundraising.

“The corporate money was on Marty Chavez, the progressive money was on Eric Griego, and then here came Michelle Lujan Grisham, and she ran a great campaign,” Scharff said. “She shocked everybody.”

Diane Denish, Richardson’s lieutenant governor, credited Lujan Grisham’s unexpected victory to her focus on women’s reproductive rights, an issue that the other candidates shied away from.

She had expertise on the subject. As health secretary, she had expanded school-based health services that provided family planning information to students.

She’s continued to stand up for these principles even when it’s politically risky. As governor, she failed to convince the legislature to overturn a 1969 state law that forbids abortions in most cases. The 1973 decision in Roe v. Wade rendered that state prohibition unenforceable, but reproductive rights advocates still want it off the books in case Roe is ever overturned. Five Democratic state senators who voted to uphold the old law lost their seats in the 2020 primary election, and it remains to be seen whether they will be replaced by Republicans or liberal Democrats.

When Lujan Grisham arrived in Congress in 2013, she rapidly rose through the ranks. After just four years, she took over as chair of the Congressional Hispanic Caucus, an influential group of Democratic lawmakers, in an uncontested bid.

“She ascended rather quickly,” said U.S. Rep. Linda Sánchez, the California Democrat who held the position previously — having waited more than 10 years to do so. “People saw that she produced results.”

Sometimes, those results were merely a matter of keeping certain issues in the public eye. One of her major legislative priorities was pushing for the DREAM Act, a bill to provide a path to citizenship for undocumented immigrants who entered the U.S. as children. The bill didn’t pass, but Lujan Grisham kept it at the fore, delivering handwritten notes, miniature piñatas and other trinkets to then-Speaker of the House Paul Ryan.

She also organized contentious meetings with officials of President Donald Trump’s administration, like Department of Homeland Security Secretaries Kirstjen Nielsen and John Kelly. And when she was denied a seat at the table, she simply walked into the room and sat down without an invitation.

Her short stature, she joked, made it easy to sneak onto the White House grounds.

As governor, Lujan Grisham has made child well-being a priority — an obvious charge for the leader of a state that’s consistently ranked as one of the worst places in the country to be a kid.

A year and a half into her first term, she saw a major legislative victory with the creation of the Early Childhood Education and Care Department, an executive-level department to coordinate governmental programs for young children.

Establishment of a $320 million “early childhood trust fund” demanded a little more effort. It took two legislative sessions because of disagreements between Lujan Grisham and lawmakers about where the money should come from.

She got easy buy-in with funding for education, including raises for teachers. Here, her success was propelled by a 2018 state district court judgment in a consolidated lawsuit, known as Yazzie/Martinez, that found New Mexico children would be “irreparably harmed” if schools weren’t quickly improved. This year, Lujan Grisham requested the judge to dismiss the lawsuit, arguing that the state did what the judge asked, but she was summarily rebuffed.

Jimenez, who today helms one of the state’s top child advocacy organizations, said he was “disappointed” that Lujan Grisham tried to get the suit dismissed. The state, he said, “needs to be held accountable for the lack of commitment to education funding.”

While she’s enjoyed a largely sympathetic legislature — with Democratic majorities in both houses — she has faced significant challenges, particularly around firearms legislation. In 2019, she signed a law that would make it easier to take guns away from people who committed domestic violence; in 2020, she signed another law to keep guns out of the hands of people who might harm themselves or others.

Many sheriffs across New Mexico responded with rage, declaring their counties “Second Amendment sanctuaries” where such laws would never be enforced.

“She was responding to the issue of the day; I do think that that’s leadership,” said Lonna Atkeson, a professor of political science at UNM. “That shows her willingness as an executive to stand up. But, obviously, she’s gotten a lot of pushback.”

In fact, Lujan Grisham expended so much political capital on gun legislation that, according to Denish, she lost much of her momentum on other issues. The abortion reform failed, as did a widely popular move to legalize recreational marijuana.

As Lujan Grisham continues her career in politics, whether she remains in the governorship, becomes vice president, lands a Cabinet secretary post, or runs for even higher office, she may be considering the words she spoke at a UNM event about women in politics during her gubernatorial campaign in 2018.

“If you engage as a candidate or someone who’s working on a campaign, it will be the most degrading, difficult, challenging, humiliating, infuriating, difficult work of your life,” she said. “And somehow it will all be worth it.”