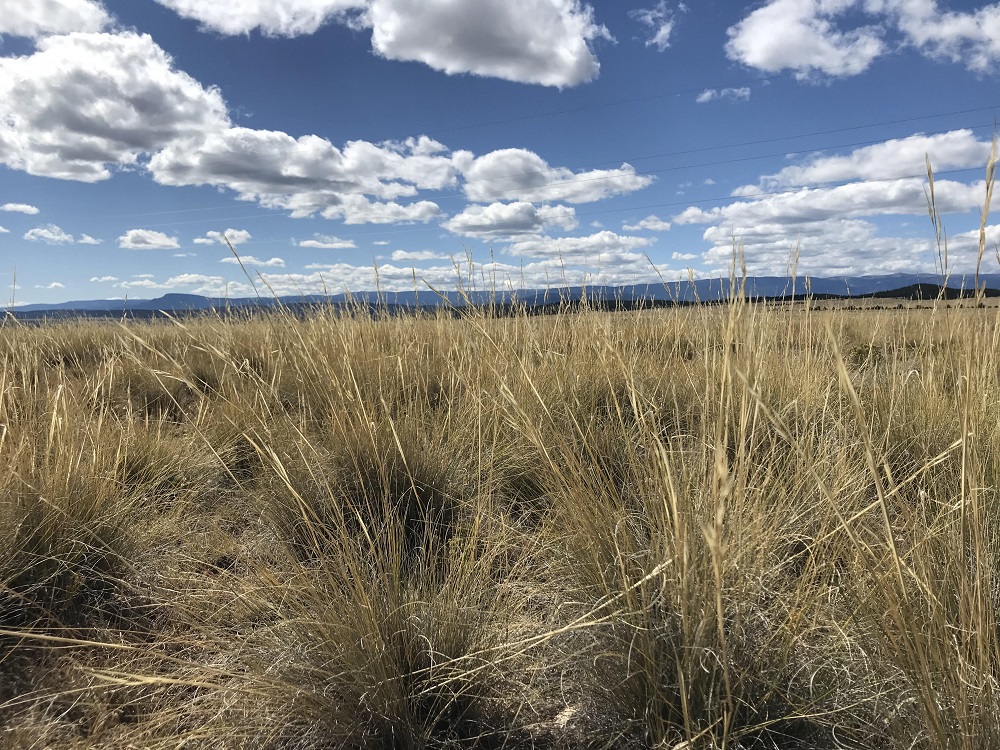 Tom Sidwell says 2020 is the first year in forty that he’s been caught “flat-footed.”

“And my wife won’t let me forget it,” he joked during a recent U.S. Department of Agriculture Southwest Climate Hub webinar on drought in eastern New Mexico.

Sidwell, who runs the grass-fed beef operation JX Ranch near Tucumcari with his wife Mimi, usually begins the year by clipping grass. The rancher has developed a system for estimating how much forage his pastures are producing by getting down on his hands and knees and using scissors to cut the grass poking up through a wooden frame measuring one square yard. He uses that frame to take samples of the grass growing in different areas of his pastures, collecting the clippings into plastic bags and weighing them with a hanging scale in his truck. Then he goes home to calculate how much forage he has, and how many cows he can support on it. That information is a crucial part of Sidwell’s yearly drought and grazing planning.

But last summer, Sidwell had a full knee replacement. When February came around, he couldn’t get down to clip.

“If I got down, I couldn’t get up. So I didn’t do my drought planning,” Sidwell said. “And here we are, this is the worst our grass has looked in 40 years of holistic management.”

Ranchers are facing a particularly tough year. The COVID-19 pandemic has made 2020 one of the worst years for cattle in decades, as outbreaks of the viral disease among employees at meat packing facilities across the U.S. and here in New Mexico has backed up beef processing for months.

A hot and dry summer is only compounding the problems for ranchers in eastern New Mexico. State Climatologist Dave DuBois estimates about two-thirds of New Mexico saw below average rainfall so far this year. Temperatures have been higher than normal, too, this summer. During the first 21 days of July, southeastern New Mexico saw temperatures that averaged seven degrees above normal.

“It’s gotten really dry, we haven’t had much rain,” DuBois said during the drought webinar. “So it’s dry, and in a lot of places it’s also hot.”

Dry, hot summers are something that all ranchers in New Mexico are familiar with, said Katie Meiklejohn, coordinator at the High Plains Grasslands Alliance in eastern New Mexico.

“Drought has been a part of that system for a really long time,” Meiklejohn told NM Political Report. “We’re always trying to find the most effective ways to deal with drought.”

In drought years like this one, ranchers are faced with a number of tough choices and unpleasant trade-offs, according to Lawrence Gallegos, New Mexico field organizer at the Western Landowners Alliance.

One option is to wean and sell off cows earlier in the summer than usual, but that means lower prices per cow, Gallegos said. On the other hand, trying to squeeze by in a drought can quickly grow expensive if the pasture forage is overgrazed, the price per cow isn’t high enough, or a rancher needs to buy hay to feed the cattle.

Gallegos, who ranched until 2019, pointed to 2002, when the state experienced an historic drought. At the time, Gallegos ran a ranching association using Forest Service land to graze. The group had about 16 ranches at the start of the season.

“After that year, we ended up with 13 because some of them went out of business,” he said.

“That year, personally, I sold a little more than half my herd, I used that money to buy feed to feed my other half through the next winter.”

Gallegos estimates that, since 2002, he’s seen 15 or 16 years of below average precipitation and snowpack. And despite a nearly-normal snowpack this winter, 2020 is another below average year for water, a worrying trend as scientists expect aridification to increase in the southwest as the climate continues to warm.

“A lot [of ranchers] have realized there has to be some sort of mitigation, especially the smaller ranchers,” Gallegos said.

One of the keys to surviving drought years is to watch the grass, Meiklejohn said. Her organization recommends ranchers develop drought plans each year, tracking forage inventory and rainfall frequently throughout the year to gauge whether the operation needs to downsize to get through the summer.

“The whole idea of a drought plan is that this is an adaptive process. It’s balancing your forage with your demand, and being in a position where you’re doing it proactively so you’re not caught at the wrong time, where all of the sudden you don’t have enough forage or you’ve overgrazed and the market is crashing,” she said, adding that taking these steps can help ranchers preserve the ecological integrity of the land and the herd.

Overgrazing is something that ranchers have to keep a close eye on in dry years. It occurs when livestock nibble on grass plants that are still recovering from earlier feeding sessions.

“In a drought, if you’re not getting that rain, they’re not going to grow as much and they’re not going to recover [from grazing] as much,” Meiklejohn said. “If you have long grazing durations, you run the risk of having animals re-graze plants that have already been bitten before they’ve fully recovered. If that happens repeatedly over time, and especially if it happens in drought and there’s no rain to help with that recovery process, you stress the plants.”

Overgrazing during a drought can have consequences that bleed into the next year, Meiklejohn said, as stressed pastures take longer to recover, and don’t produce as much forage during that recovery process.

This year, ranchers in northern New Mexico are already struggling with forage. Robert Martinez, who owns Martinez Ranch in Taos County, said it’s been a rough year for grass on his irrigated pasture where he raises winter feed for his small cow-calf operation.

Adaptive approaches to a changing climate

And as the climate warms and the environment here in New Mexico becomes more arid, ranchers are adjusting their land management practices to help weather the dry spells, said Amy Ganguli, associate professor of range science at NMSU.

“Drought and climate change is certainly impacting ranching operations, certainly resulting in people making decisions in response to that — sometimes decisions that are really hard to make because of the economic repercussions,” Ganguli said.

Ranchers are increasingly turning to things like rest-rotation grazing practices to help preserve the forage when drought is stressing the plants, Gallegos said, which can also help improve the soil health of the pasture and increase forage production in the long term.

“They’ll leave one or two pastures and don’t graze it all, and try to build up the soil and the way it holds water,” Gallegos said. “By rest rotation, they end up getting more forage on the land. If you have more groundcover, the water retention in the soil stays there longer. That’s a strategy for long-term.”

Others, like Martinez, are experimenting with regenerative agriculture principles to help build up the soil and promote healthy biodiversity in the forage.

“This year, I started to mix in cover crops with my perennial grasses, to try to see if it will help develop my soil and hold more water,” Martinez said. “I’m looking at that as a potential answer to years like this, but also to improve soil health. I think that’s going to be huge for people who want to stay in the business.”

Data, too, is playing a larger role in ranchland management, buoyed by expanding “producer-professional” relationships with scientists and making use of weather monitoring data to inform decision-making in tough water years, Ganguli said.

“People have always done this, but now that data is more available, it’s more accessible,” Ganguli said. “A lot of producers will have rain gauges, a lot will even have weather stations on their ranches.”

The HPGA is working with Ganguli and others to help ranchers get a hold of data on things like weather, rainfall and groundwater. Ranchers are also getting help with forecasting from the USDA’s grass-cast tool, which just became available in New Mexico this year. The tool uses historical data, weather monitoring and precipitation data to forecast grassland productivity.

But Meiklejohn said the best resource for ranchers to use when responding to drought is the land itself.

“What works for one person doesn’t work for the other. Innovations and technologies are always opportunities and are worth exploring, if they provide valuable data that helps people with planning,” Meiklejohn said. “But you should always rely on ground truth. Be in touch with your land, listen to what your land is telling you.”