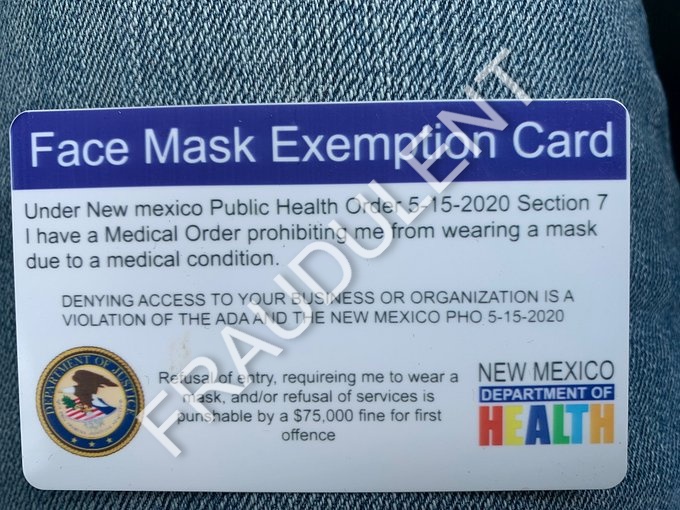 The New Mexico Department of Health says that “counterfeit” face covering exemption cards in Santa Fe County are not distributed by the state of New Mexico or the U.S. government as claimed on the cards.

The state mandates face coverings for those in public to help slow the spread of COVID-19.

The department warns that those who create or use these cards could face a fourth degree felony.

“People lying about a medical condition to get out of wearing a facemask literally puts their lives and that of those around them at risk,” DOH Secretary Kathy Kunkel said. “New Mexicans deserve to feel safe out in public, and fraudulent messaging like this is both illegal and potentially dangerous to people’s health.”

The cards say they are issued by the DOH and the U.S. Department of Justice, according to a release sent on Wednesday.

Gov. Michelle Lujan Grisham and health officials have repeatedly said that wearing face masks is one of the key ways New Mexicans can slow the spread of COVID-19 and help New Mexico reopen more sectors of its economy.

New Mexico is one of 34 states, plus the District of Columbia, with some form of face covering mandate in public.

Texas requires masks in public in counties with more than 20 cases; nearly all counties that border New Mexico have at least 20 cases.

Arizona requires masks for employees and customers of barbers and cosmetologists and municipalities throughout the state have passed their own mandates.

Colorado mandates that all those over the age of ten to wear masks, though counties that meet certain criteria can opt out.

The U.S. Centers for Disease Control and Prevention acknowledges that it may not be feasible for some to wear face coverings, including those who are deaf or hard of hearing, younger children or those with intellectual and developmental disabilities.

But along with those mandates have come pushback, from those who disagree with the requirements.

The DOH release on the fake exemption cards noted that the U.S. Department of Justice issued an alert about “postings or flyers on the internet regarding the Americans with Disabilities Act (ADA) and the use of face masks due to the COVID-19 pandemic, many of which include the Department of Justice’s seal.”

A June alert from the U.S. Attorney’s Office in the Middle District of North Carolina cited a fraudulent card from something claiming to be the “Freedom to Breathe Agency.”

“Do not be fooled by the chicanery and misappropriation of the DOJ eagle,” said U.S. Attorney Martin. “These cards do not carry the force of law. The ‘Freedom to Breathe Agency,’ or ‘FTBA,’ is not a government agency.”

The DOJ said the posings were not issued or endorsed by the department.

Recently, a viral video from California showed a woman claiming to be from the fictitious agency refusing to wear a mask and warning that the company could face legal action for requiring customers to wear masks. This is not true.

Part of the opposition to masks, which appears to be largely driven by politics, is the reluctance by President Donald Trump to embrace wearing masks. In July, Trump tweeted that it was “patriotic” to wear masks where social distancing was not possible.

In New Mexico, the DOH said the governor’s office is working with the state Attorney General to ensure prosecution of those issuing these “exemption” cards.