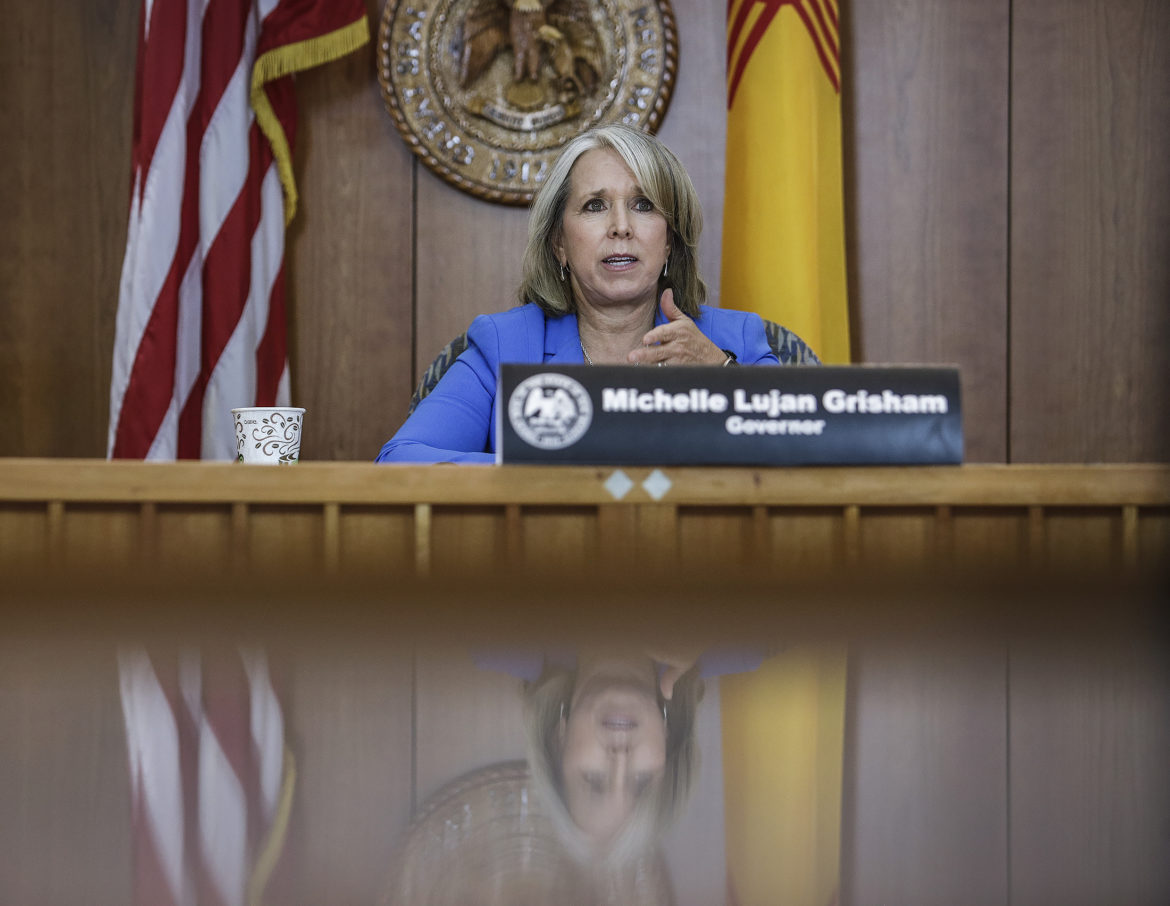 In another COVID-19 update with a positive tone, Gov. Michelle Lujan Grisham and her Human Services Department secretary outlined how the state’s response to COVID-19 has continued to improve in much of the state.

The state has consistently been under its goal of a 5 percent positivity rate—which is the percentage of positive tests out of the total number of tests—in recent days.

“I think it really demonstrates that if we limit our activities, we limit the contact we have with individuals, that we wear masks, that we do good handwashing, those activities really make a difference,” Lujan Grisham said.

But she and Human Services Department Secretary Dr. David Scrase warned that hitting gating criteria is not a finish line, but just a signal that they can consider further “risk” by reopening areas previously closed, including in-person instruction at public schools and further businesses.

“It requires constant effort to beat back the virus,” Lujan Grisham said.

She also emphasized when the state eased some restrictions, New Mexicans would need to work harder with wearing masks and social distancing, not less hard, since there would be more risk and possibility of spread as more in-person activity took place.

That was shown when the state eased restrictions in late June and saw a large spike in cases in July, after the 4th of July holiday.

Since increasing restrictions, including closing in-person, indoor service at restaurants and breweries and mandating masks, the state has seen improvement.

“We’re now coming down quite rapidly off the highest peak we’ve had during the coronavirus pandemic,” Scrase said.

He said that the cases are coming down “exponentially” and “in all regions of the state.”

That still doesn’t mean that everything is perfect in all counties.

“Things have flipped. The northwest is coming down, those colors are getting lighter,” he said, referring to a map that showed dark red for areas with more cases. “The southeast is where the problems are, where we’re seeing an uptick in cases.”

In recent days, Eddy and Lea counties have experienced record numbers of new cases, though cases remain low in other counties in the area, like Otero County.

The state will seek a target of 168 cases or fewer on a seven-day rolling average, or about 80 cases per 1 million residents.

He said he hoped the state would hit that goal soon.

Another gating criteria that showed rapid improvement was on contact tracing. The state is now matching not only its goal of reaching those who test positive for COVID-19 within 24 hours, which is the goal, but reaching those who the confirmed case have come in contact with within 29 hours, seven hours below the state’s goal of 36 hours.

Officials have described contact tracing as a key aspect of dealing with COVID-19, since it can stop those who may not realize they have COVID-19 after coming into contact with an individual who is positive from moving around and further spreading the disease.

Still, he said reaching the gating criteria doesn’t mean the work is done.

He likened it to turning on lights. Instead of turning them from “off to on,” or moving from no activity to full activity, he said it was like moving a dimmer slightly up, not to fully on.

“We’re doing well. We’re making progress,” Scrase said. “But we have to keep doing what we’re doing if we don’t want to see that curve go up.”

One challenge will be the upcoming Labor Day weekend. The governor warned that people should avoid family gatherings with those not in their household, including cookouts. She cited a case in Texas in June where fourteen family members tested positive for COVID-19 after a family gathering. One person died and another was on life support as of late July.

While dramatic, similar situations have occurred in New Mexico, according to the governor, at least when it came to spreading the disease.

“The vast majority of the individuals infected are from family gatherings,” Lujan Grisahm said. “We need folks to stop having these large family gatherings. And I realize I’m asking a lot.”

Still, the governor warned about problems with supplies for testing and said such supplies “are becoming more and more challenging to come by. We’re working diligently to do that.”

“With no testing strategy at the national level, this means we are competing with other states that have also had to increase and advance their testing,” she said.

She also said the state is ready to do “pooling,” or to test multiple samples at once, then to test each of those individually if the result is positive, pending federal approval.

“None of that is quite where it ought to be,” she said.

Scrase said that the difficult-to-procure supplies have changed during the pandemic.

“Now we’re down to struggling to find simple things that the lab uses and throws away like pipette tips or wells they use to put specimens in,” he said.

On Wednesday, the state Department of Health told NM Political Report that TriCore Reference Laboratories has been dealing with a shortage of reagents; TriCore is a private business that uses different machines, with different reagents, than the state labs.

Struggles of those who have recovered

Scrase and Lujan Grisham also acknowledged that even those designated as recovered are not always back to their levels of health before their COVID-19 infections.

“We don’t talk enough about that while people are absolutely recovering from this vicious virus, we are yet as a nation to have adequate evidence and science behind exactly what are the long term chronic issues and permanent health issues and damages resulting from contracting the virus,” Lujan Grisham said.

“The virus seems to attach to and infect and inflame blood vessels,” Scrase said. He said this can impact all areas of the body, including the brain, lungs, heart and even the vessels themselves, even after the infection is no longer present.

He said some have developed high blood pressure, shortness of breath or even heart problems after recovery.

Speaking to those who have had continued problems, Scrase said “It isn’t just a cold and we really want to acknowledge that what you’re going through is real and it’s hard.”