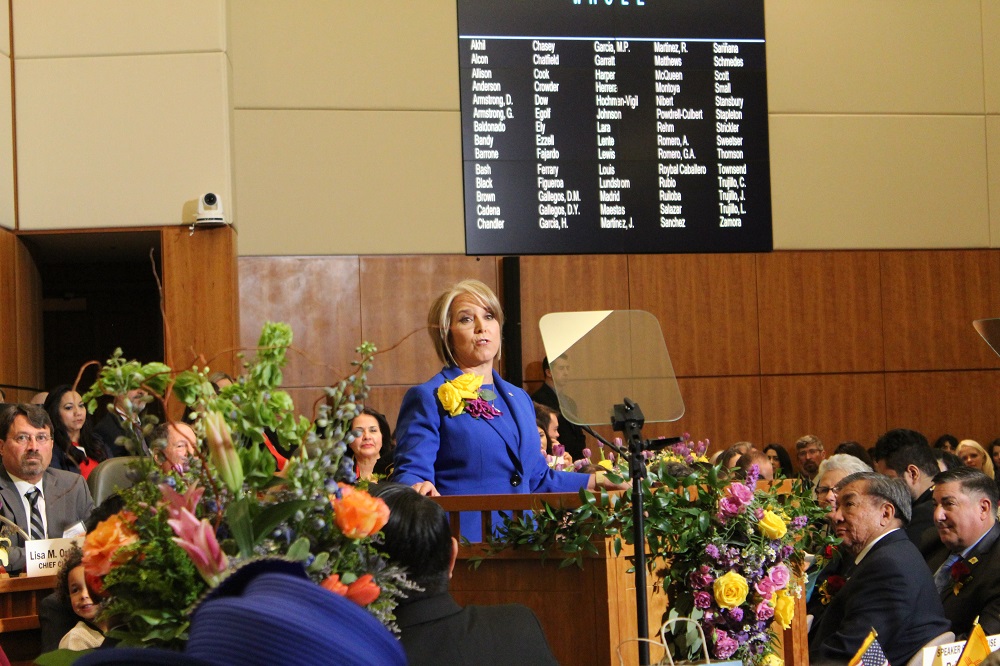 Gov. Michelle Lujan Grisham joined a choir of criticism Thursday directed towards the U.S. Environmental Protection Agency as the agency rescinded Obama-era regulations for methane emissions in the oil and gas sector.

EPA Administrator Andrew Wheeler signed the new regulation at a press conference in Pittsburgh, Pennsylvania. The new rule removes requirements for operators to fix methane leaks discovered during bi-annual inspections on equipment at well sites and downstream that were installed after 2015, and relaxes other standards related to emissions.

“EPA has been working hard to fulfill President Trump’s promise to cut burdensome and ineffective regulations for our domestic energy industry,” Wheeler said in a statement. “Regulatory burdens put into place by the Obama-Biden Administration fell heavily on small and medium-sized energy businesses. Today’s regulatory changes remove redundant paperwork, align with the Clean Air Act, and allow companies the flexibility to satisfy leak-control requirements by complying with equivalent state rules.”

“It is utterly disheartening and sadly unsurprising to hear once again that critical environmental regulations are being rolled back by the Trump administration, leaving states to fend for themselves,” Lujan Grisham said in a statement Thursday afternoon.

Lujan Grisham cited her administration’s work to develop more stringent methane rules for oil and gas operations in the state.

“New Mexico is well on the way to putting in place our own robust and innovative regulations to curb methane emissions in the oil and gas industry, which will yield improved air quality and fewer climate change-inducing emissions,” she said. “We will continue to do everything in our power to fight climate change and environmental degradation despite the Trump administration’s backward approach.”

The rollback has been widely criticized as dangerous to public health, climate and the environment. The Environmental Defense Fund (EDF) and the National Resources Defense Council (NRDC) both indicated intent to challenge the new rules.

“We will see EPA in court,” David Doniger, senior strategic director of climate and clean energy at NRDC, said in a statement.

“These rollbacks would have devastating effects on our climate and air quality, and will disproportionately damage the well-being of more than 9 million Americans who live within half a mile of wells affected by this rollback, including many Americans in our most vulnerable communities,” EDF president Fred Krupp said in a separate statement.

The EDF has been a vocal critic of methane emissions and regulations at both the federal level and here in New Mexico. Jon Goldstein, EDF director of regulatory and legislative affairs, has called on state regulators at the New Mexico Environment Department and the Energy, Minerals and Natural Resources Department to close loopholes in the draft methane rules released in July that would allow methane emissions from certain sources to continue unabated.

Public comment on the state’s draft methane rules is open until September 16. You can find more information here.