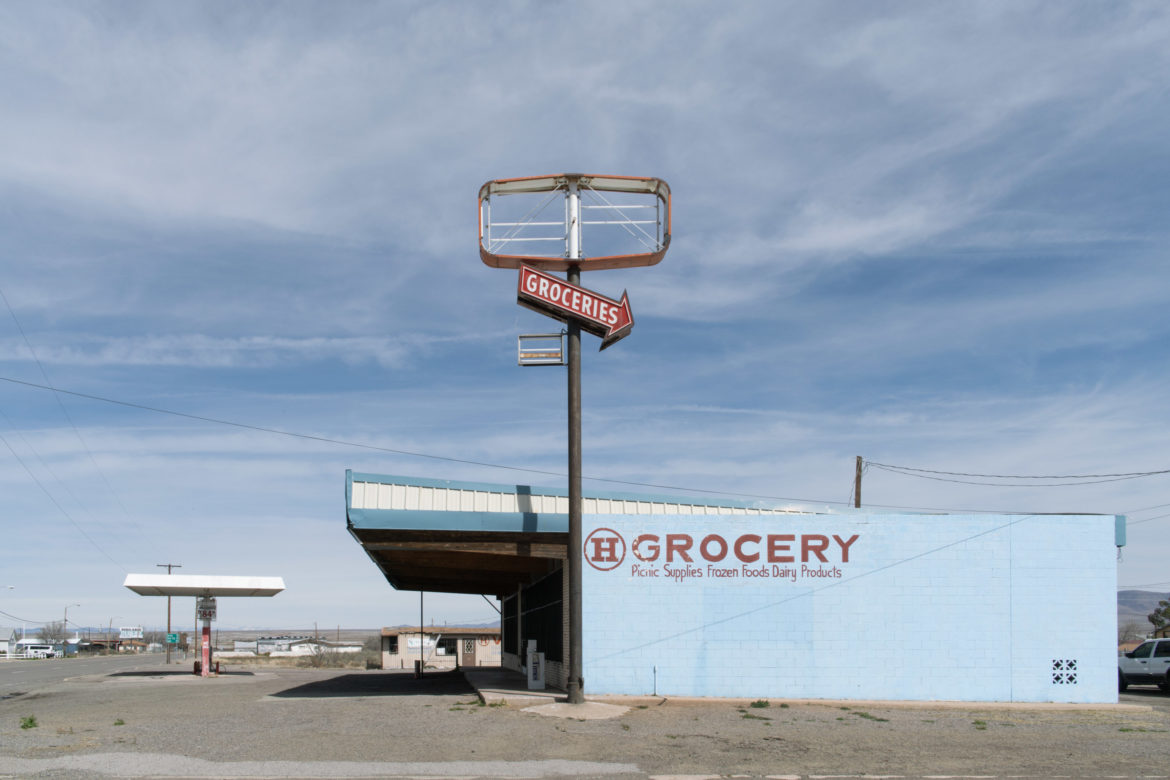 The remains of a grocery store stand in front of an abandoned gas station located on U.S. Route 70 in Lordsburg.

Tucked away in New Mexico’s bootheel, Lordsburg is the kind of town that hasn’t bustled in 50 years. It’s the birthplace of the state song “O Fair New Mexico” and the seat of Hidalgo County. It is also a potential ghost town, home to about 2,800 residents. Its population has been dwindling for decades.

Getting an accurate count in the 2020 U.S. Census will help keep the town alive, residents say. But the coronavirus pandemic — and what some call political maneuvering — have kneecapped census outreach efforts, threatening the future of Lordsburg and other small communities in New Mexico.

“I think Lordsburg is done,” said Clark Smith, the city’s former mayor, a title he held for 21 years. A retired mineworker whose roots go back four generations in Lordsburg, Smith is among many who worry that a substantial undercount is in the offing.

Similar fears have multiplied across the state amid startling news this month that the U.S. Census Bureau is ending its data collection efforts a month early.

“It’s an appalling dereliction of duty to cut short the time apportioned for the count,” Nora Sackett, spokesperson for New Mexico Gov. Michelle Lujan Grisham, said in an email. “Anything less than an accurate and fair census will leave too many New Mexicans without resources and programs to which they’re entitled. Every New Mexican deserves to be counted.”

Small cities like Lordsburg offer a window into what’s at stake if what’s deserved isn’t delivered.

The census, a constitutionally mandated headcount, determines crucial matters like apportionment — the number of representatives a state is allotted in Congress. More than $1.5 trillion in federal funds each year are distributed based on census data, a George Washington University study found.

The neediest communities are often the toughest to survey. Like Lordsburg, tucked in the Chihuahuan Desert in New Mexico’s southwest corner, they are remote places with high poverty rates and a pronounced lack of computers, broadband and reliable phone service. In Southern New Mexico, their residents are predominantly Hispanic or Latino; some are undocumented immigrants who fear they’ll be detained or deported if they fill out the census.

President Trump’s inflammatory anti-immigrant rhetoric has augmented those fears, as has his administration’s attempt to include a citizenship question in the census. Even though the U.S. Supreme Court in 2019 struck down the government’s petition to add the question, confusion about the issue persists.

Now, concerns of an impending undercount have taken a new turn.

Census Bureau Director Steven Dillingham announced last week that the count will end Sept. 30 — a full month earlier than expected. He said the bureau would “streamline” the process, explaining that the shortened timeline is necessary in order to deliver data to lawmakers by Dec. 31.

Democrats accused him and fellow Republicans of attempting to subvert the system. Streamlining, they said, means scaling back the critical work of knocking on doors in rural outposts such as Lordsburg, as well as on tribal lands and other rugged swaths throughout New Mexico and the nation.

“The Trump administration is trying to manipulate the 2020 Decennial Census for political gain,” U.S. Sen. Jeanne Shaheen (D-New Hampshire) wrote in an Aug. 4 letter to Dillingham. Cutting the work short by a month — amid one of the worst pandemics in history — could cause a “massive undercount,” she said.

One third of its residents live in rural areas. More than half the Hispanic population lives in hard-to-count census tracts. An estimated 18 percent of households live in the toughest areas of all: extremely remote communities and tribal lands, often marked by dirt roads, nonexistent street signs, feeble cell phone signals and a lack of standard mailing addresses.

“In some of these places you can’t even get a signal to make a phone call, let alone get internet access,” said Abraham Sanchez, a community organizer with the faith-based organization New Mexico Comunidades en Acción y de Fé (NM CAFé).

It is a given that such remote locations rely upon census workers going door-to-door to distribute the survey. Even in non-pandemic times, they are notoriously difficult to count.

And then came COVID-19. When it began to tear through Indian Country in March, the Navajo Nation and other tribal lands closed entry to nonresidents to contain the virus, making census door-knocking campaigns impossible. Gov. Lujan Grisham issued health directives that required New Mexicans to shelter in place. It was not a time when people wanted to open their doors to strangers — mask-wearing census workers or otherwise.

The Census Bureau had hoped to ease the process and boost response rates by making the 2020 questionnaire available online. But the digital divide in rural America made that a non-solution. In some New Mexico counties, less than half of residents have access to broadband internet.

The shortfalls have major consequences. New Mexico receives more than $7 billion in federal funding each year, the government estimates. For every person who doesn’t get counted, the state misses out on $3,700 in federal funds per year. Over a decade, that means the state loses $780 million if just 1 percent of New Mexico residents goes uncounted.

A century ago, Lordsburg served as an important waystation, marking the halfway point between Tucson and El Paso. Its train depot bustled with travelers who found a wealth of cafes and lodges on nearby Main Street.

During the 1950s — the heyday of cross-country road trips — Lordsburg buzzed with motorists, thanks to its location along U.S. Route 70, the so-called “Broadway of America,” one of the most traveled roadways in the country. Mines in nearby Animas, Playas and Silver City supplied ready employment. In 1964, by the city’s reckoning, Lordsburg boasted 21 motels, 20 restaurants and 31 service stations. More than 3,500 residents called it home.

Today, that’s all in the rearview mirror. Interstate 10 replaced the old route through town: Despite three off-ramps, most highway travelers bypass the city altogether. Its main drag features a smattering of abandoned motels, storefronts and dilapidated service stations punctuated by Ramona’s Cafe, the Hidalgo County Herald office, and merchants selling rocks, guns and flowers. Lordsburg, like so many rural outposts in America, could rightly be called endangered.

Between 2000 and 2010, its population plummeted 17 percent, from 3,379 to 2,797 — the steepest loss in the state, a New Mexico State University (NMSU) study found. The number of residents sank another 15 percent between 2010 and 2018, according to the American Community Survey, which provides population estimates every few years.

“We are the kind of community that is at risk of being gone,” said Jessica Mesa, an art and music teacher for the local school district. Mesa moved back to Lordsburg in 2016 after 10 years away. When she left, Main Street was “lively,” with a Snappy Mart and a KFC-Taco Bell — all gone.

The county doesn’t have a single hospital. Its fire stations are run by volunteers. So is all but one paramedic unit. Last year, Lordsburg’s only nursing home shuttered, causing family members to move their loved ones farther away.

<optional cut graf> Brenda Hood, owner, editor and founder of the Hidalgo County Herald, studied journalism at NMSU before returning to launch the weekly 20 years ago. Hood said she once envisioned her daughter taking the helm one day, but like many young people, her daughter moved away. Today, she imagines the paper will retire when she does.

“I’ve been lucky to survive this long,” she said. <end optional cut>

David Whitmore, a graduate of Lordsburg High School and a leader of the local Elks Lodge, went to NMSU to study music before returning years ago for a local job. In his free time he helped direct the school band, which he’d once played in himself. As a freshman, he’d been given a brand-new tuba. Today, there is no band at the high school: the district can’t afford one, Whitmore said. All the instruments were sold “for so dang cheap,” including his tuba. “To try to start a band program again — the school will never have the money to be able to do it,” he said.

He recently filled out his census form, but he can understand the lack of urgency among rural residents. “It’s like, why should I waste my time and do it?” he said. “We’re kind of out here on our own.”

Indeed, as of Aug. 13, only 40 percent of households in Hidalgo County, population 4,198, had responded to the census.

Census boosters in Lordsburg have tried their best to get more participation: Each person counted in the 2020 census will help keep the city afloat, they say. Local pastors even preach about it in Sunday sermons.

“Fill out the forms, call by phone, look for help, respond,” the Rev. Manuel Ibarra implored in a Good Friday video posted to Facebook. Ibarra, the vicar of St. Joseph Church in Lordsburg and pastor of Santa Ana Catholic Church in neighboring Deming, called on parishioners to embrace the census as a spiritual duty. In times of crisis, “we respond, like good citizens and good Christians. We participate in the census. We all count.”

Lordsburg, like many small cities, doesn’t have the resources to launch census education campaigns. In larger towns, there have been public events where residents get free help in filling out the survey, former mayor Smith said.

But in Lordsburg? “There’s been nothing of the sort,” he said. In past years, Smith said he used to mention the importance of the census in a column he wrote for the Hidalgo County Herald. But COVID-19 is a disaster of such epic proportions that few other topics today can gain traction. Most people are too busy trying to survive to worry about the census.

In Hidalgo County, an estimated 58 percent of the population is Hispanic or Latino. As elsewhere around the country, a general distrust of the government has led to sizeable numbers of them not completing the survey.

“Historically, we’ve never had an accurate count of Latinos — not ever since we started tracking Hispanic origins in 1970,” said Lizette Escobedo, director of the census program at the National Association of Latino Elected and Appointed Officials (NALEO), an organization that advocates for Latino civic engagement. “But this census is probably the most worrisome when it comes to massive undercounts in Latino communities and in rural communities.”

No dollars, no census

On July 12, a few dozen Lordsburg residents gathered outside of Kranberry’s Chatterbox, a family-style restaurant and Lordsburg institution for more than 35 years, and now one of only four restaurants in town.

Held in sweltering heat, the event was part of a protest organized by the state’s restaurant industry in response to the governor’s closure of indoor dining, a coronavirus emergency health measure.

Shannon Graham, a server at Kranberry’s — one of her three jobs in town — said she had to go on food stamps when the order went into effect and the restaurant temporarily closed. Kranberry’s soon reopened for curbside and pick-up service. But servers need indoor dining for good tips, Graham said. Her 2-year-old grandson, Saint, held up a pink sign with letters that read “My grandma can’t afford my diaper.”

After the group dispersed, Maureen Thornock, Kranberry’s owner, sat down at one of the tables she’d set up outside the restaurant, to attract customers. Lordsburg’s desert setting made outdoor dining problematic: “It’s 104 degrees out here,” she said from behind her cloth mask. Thornock had done her best to make things comfortable, bringing in an industrial-sized portable air conditioner and box fans. Now she enjoyed a rare moment to rest.

During the protest, she’d been surrounded by supporters —many of them employees and long-time friends — who’d posed for photos, their signs held high. “Big or small, we are all essential,” one of the banners said.

Thornock hoped that that was true.

There is still time to fill out the 2020 census. Answers are confidential. There are no questions about U.S. citizenship status in the survey. Residents can complete the census online at www.my2020Census.gov. They can also submit the survey by mail or by phone, at these numbers: