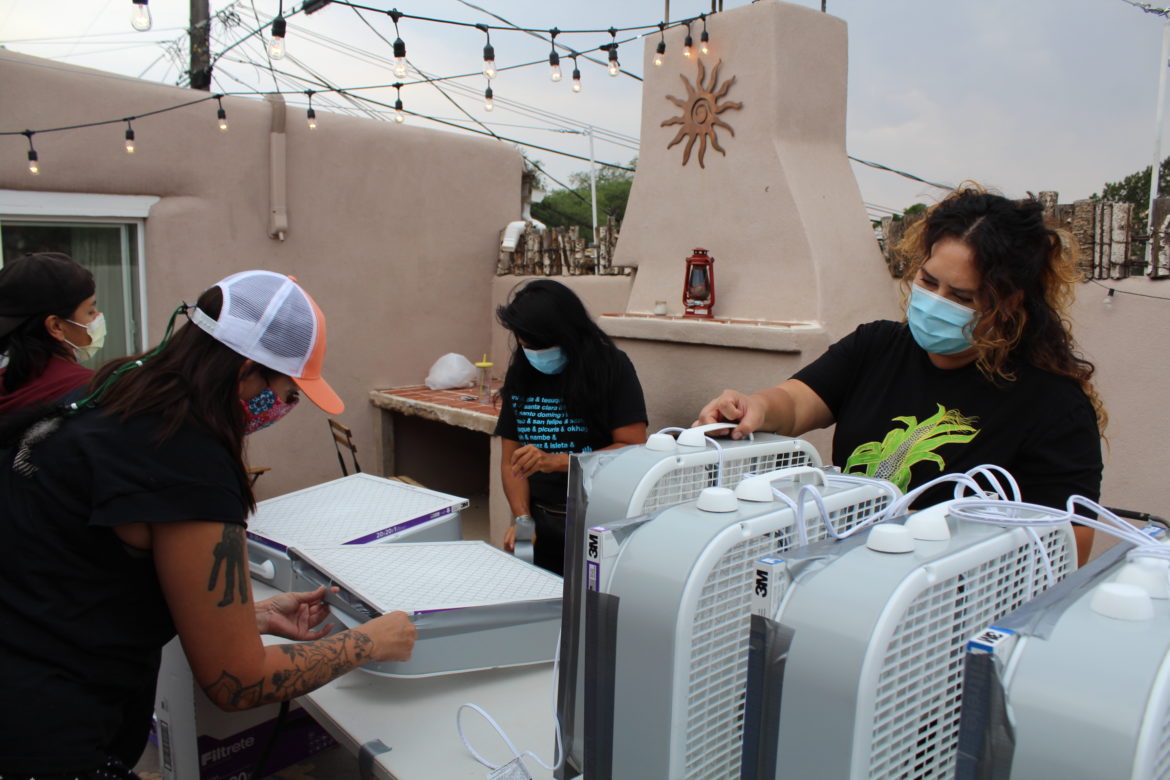 SANTA FE —  Up in the Sangre de Cristo Mountains, the Medio Fire is burning over four square miles of forest land. Its smoke has been combining with that from wildfires across the West and spilling down the mountains into Santa Fe and nearby communities.

When Carrie Wood found out that elders in the Nambé, Tesuque and Pojoaque pueblos had been contending with that smoke for days, she decided to step in and help. Wood and other organizers of the Three Sisters Collective first tried looking for air purifiers in stores, but everywhere they looked from Española to Santa Fe to Albuquerque had low stock.

They bought what they could and took donations, but wound up making purifiers themselves. Three Sisters members set up shop in Wood’s patio on Monday and, using box fans, 20-inch Filtrete air filters and duct tape, they made over 30 filters to bring to the elders and others with respiratory issues exacerbated by the smoke.

“We’re only doing what Indigenous women have been doing forever — helping the community,” Christina M. Castro, a Three Sisters member of the Taos and Jemez pueblos, said.

While it was a scramble to get all the air purifiers together and delivered in just a couple days, Castro and Wood are braced for the reality that they’ll have to do this again.

The changing climate and development encroaching onto natural spaces are making wildfire seasons worse in New Mexico and across the West.

In addition to threatening homes on Santa Fe’s outskirts, the Medio Fire has brought poor air quality to the region. The state Environment Department’s Air Quality Bureau said those with respiratory conditions should take extra precautions.

“Smoke from wildland fires does not discriminate, as evidenced by the smoke impacts we are seeing in the Santa Fe area,” the agency said in a statement. Real-time air quality monitoring fis available on an online map from the department.

While the recent smoke and haze make wildfire concerns more pressing, they aren’t new. New Mexico’s state government said the trend of worsening wildfires began over 20 years ago in the late 1990s.

“Both climate change and fire exclusion have created fuel conditions and fire behavior that is unprecedented [and] creating large burn scars on the landscape,” the state forestry division wrote in its draft 2020 Forest Action Plan. “Wildfires continue to grow larger, burn hotter, and leave vast areas denuded of trees and vulnerable to debris flow.”

‘The manifestation of the climate crisis’

Artemisio Romero y Carver, a high school senior, was on a run near his home just outside Santa Fe recently on a route he’d been running for years when something new happened: His eyes started to burn from the wildfire smoke.

The first thought that came to his mind was bleak: “This is the manifestation of the climate crisis and this is only going to get worse from here,” he said.

While burning eyes were a fresh symptom of climate change for Romero y Carver, he said he has already seen winters and summers get warmer in his young lifetime. He’s noticed fires get worse and more frequent and the monsoon season go from predictable to ever-changing.

Romero y Carver is on the steering committee for YUCCA Action, a youth-led climate activist group. Part of the blame for climate change, he said, lies with New Mexico politicians.

He’s pushing for a moratorium on fracking, the controversial drilling technique where sand, water and chemicals are pumped underground to extract oil and gas. It’s widespread in New Mexico, especially in the northwest’s San Juan Basin and the Permian Basin in the southeast.

Fracking’s environmental impacts are major — from polluting water to drying out soil to emitting methane, a potent greenhouse gas.

Those impacts are worsening climate change and are partly to blame for the increasing wildfires, Romero y Carver said. He believes it’s time for New Mexico officials to stop allowing fracking on state lands.

With the effects of climate change already bearing down on New Mexico, Castro said Indigenous knowledge can help everyone. Many environmental and Native activists say tribal fire management practices could mitigate some of the catastrophic wildfires of recent years.

While U.S. fire officials have a history of fully suppressing fires, tribes historically were able to avoid the massive blazes of today by learning to coexist with fire, often letting natural fires burn, restoring the forest floor and eliminating the fuel for a larger fire.

“The fire makes me so sad. Our local community is suffering,” Castro said. However, she said investing in Indigenous knowledge is helpful “so that we can be fortified to all the imminent changes that are already upon us with the environment.”

Wood, who is Navajo, noted that the mutual aid efforts that have gained prominence in the coronavirus pandemic will be just as vital as climate-induced disaster continues.

She said that while bureaucracy often slows aid efforts by the government or other larger entities, smaller, local collectives can act fast — like Three Sisters did to get air purifiers to elders.

“Having that strong, tight-knit community where we trust each other and we work [together] is very important,” Wood said. “We need to be able to act fast, and that is not going to happen with just one person.”