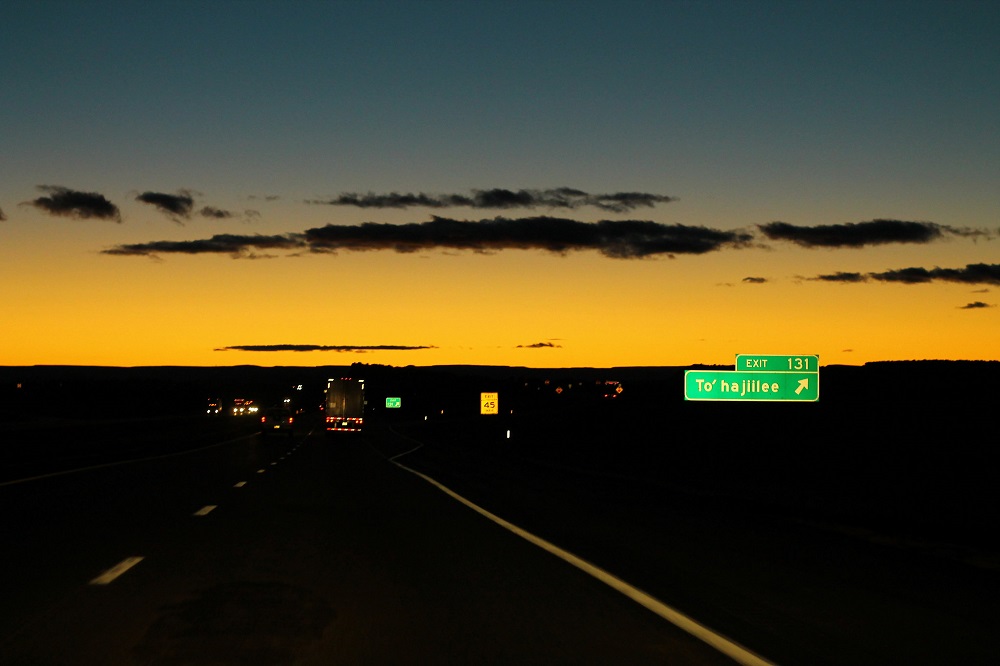 The Diné community of To’Hajiilee is named after a spring in the area, which at one point sputtered up enough freshwater to fill one bucket after another. That’s what the name references, roughly translated into English. Today, the segment of Rio Puerco aquifer that is located beneath the village, which sits just outside Albuquerque near I-40, is running out of water.

“It appears the aquifer has been decreasing,” George Mihalik, an engineer with the firm Souder, Miller and Associates, told NM Political Report. “If you go up and down the Rio Puerco aquifer, like Laguna Pueblo to the south, they have similar issues with the wells there.”

But the community of about 2,500 people, which is currently relying on just one supply well, needs access to more clean water.

But plans to access and transport that water are being thwarted by a development firm that hasn’t agreed to sell a two-mile easement for the pipeline. That company, Western Albuquerque Land Holdings (WALH) has refused to give the community access to the easement for years, according to Bernalillo County Commissioner Debbie O’Malley, who represents the community in District 1.

“They could have had water by now. They started asking two years ago,” O’Malley told NM Political Report. “In 2007, the ABCWUA agreed to give them water. The Water Authority made it very clear they were happy to negotiate with To’Hajiilee to deliver their water. What’s getting in the way is two miles.”

Tom Carroll, whose firm Carroll Strategies is handling communications for WALH, told NM Political Report the company “still [hasn’t] gotten anything official from anyone about what they want to do.”

“The idea that we have been asked and haven’t responded is not true,” Carroll said, but clarified that while neither the County nor the ABWUA had contacted WALH, To’Hajiilee had.

“We’re trying our best to get the information we need to make a decision,” Carroll said.

Groundwater pumping has been an issue for To’Hajiilee for years due to poor quality of water in the aquifer and its corrosive effects on the equipment used to pump it up to the surface.

Souder, Miller and Associates did a study of the community’s water infrastructure, including its supply wells. There are currently six wells drilled, but only one is operational.

“Your first reaction is, why do you only have one well?” Mihalik said. “We actually had a well driller do some testing and determined basically that the wells weren’t usable.”

“The main issues are not enough water — low quantity — and poor water quality,” Mihalik said. Water coming up from the aquifer contains hydrogen sulfide, which Mihalik said causes the rotten egg smell and makes the water corrosive. It’s also high in iron and it’s “really high” in total dissolved solids (TDS), he said, which is a measure of the total concentration of dissolved substances in water.

The first wells were drilled in the 1960s, and the latest two — wells 5 and 6 — were drilled over a decade ago. Mihalik said that the low water quantity and the poor water quality together make drilling another well an unworkable solution.

“The corrosive nature of the water causes the well components to have a short lifespan,” he said. He estimates a brand new galvanized draw pipe with a new pump would last only two years under these conditions.

“The corrosive water eats up the components, and the sediment builds up over time, so the components only have a life span of two years and you gotta re-do it,” he said. “And over time, the yield of the well, how much you can pump out of it, has decreased, which has been the same problem with all the wells. It’s not a long-term solution.”

“Well number six was not even usable when it was first drilled,” Mihalik said.

Now, it seems that water supplies in the aquifer are not large enough to support the community of 2,500.

“I think the community was — many years ago when they had their first well — the community was smaller. It’s grown a little, it’s not a fast-growing community,” he said. “But the combination of a little bit more people and less water has finally hit the tipping point, where there’s less water than the people need.”

The Navajo Nation Department of Water Resources did not respond to a request for comment, nor did To’Hajiilee chapter president Mark Begay.

The community has been looking for an alternate water source since 2006, but didn’t have the funds necessary to build a pipeline to ABCWUA’s water system. Two years ago, WALH completed a $30 million water holding tank at the far western edge of ABCWUA’s system, to supply water to the planned Santolina community WALH has proposed in Albuquerque’s West Mesa area.

WALH transferred ownership of the tank to ABCWUA, and its Santolina project has been on hold ever since. But the new tank presented a solution to To’Hajiilee’s water crisis: a shorter and therefore less expensive 7.3 mile long pipeline to carry Navajo water to To’Hajiilee.

“It would be Navajo Nation water, but just using Albuquerque’s water system to transport it,” Mihalik said. “The solution is still providing Navajos with Navajo water, it’s just a different way.”

The pipeline would cross a handful of privately-owned property lots, including a two mile stretch of land owned by WALH, where the water tank is located. All the other property owners have agreed to sell easements, O’Malley said. All but WALH.

“This is about one thing, a real estate transaction,” O’Malley said. “That’s what it comes down to. Are they willing to enter into a purchase agreement, or not?”

According to Carroll, WALH has been willing to negotiate with ABCWUA and To’Hajiilee “all along.” Carroll confirmed that To’Hajiilee reached out a number of times to WALH, but described those requests as “informal” and said the ABCWUA hadn’t officially contacted them about the project until more recently.

The company in February requested a series of documents about the project that the ABCWUA determined were not needed for the easement negotiation, which is essentially a real estate transaction.

“We asked for three documents, a water availability letter, a service availability letter and a development agreement,” Carroll said. “The water authority said, that’s not the way to do this for a bunch of reasons, so we said ok, here are some questions. And that’s what we’re waiting for.”

Carroll clarified that WALH needs answers to those questions to help it determine how much of the water tank capacity To’Hajiilee might need.

Company representatives and County Commissioner Steven Michael Quezada, who told Begay in a letter he has a “good relationship” with WALH, formed a “task force” in early August to handle the back and forth between the company and To’Hajiilee on negotiations. The first meeting was held August 14, but not everyone was happy about it.

Begay expressed concerns about the process and the task force from the get-go. He asked that To’Hajiilee be consulted on future meeting agendas, and that O’Malley, who has been a vocal critic of WALH’s actions, be present at future meetings as To’Hajiilee’s county representative.

Meanwhile, O’Malley said the Bernalillo County Commission voted earlier in August to proceed with condemnation of the property if necessary in order to provide To’Hajiilee access to the easement needed to complete the pipeline. In a letter dated August 19, Begay said he supports that action.

“While we want to work with WALH, we cannot afford to put all our eggs in one basket when we don’t know what WALH’s intentions are,” the letter stated. “We cannot afford to risk delaying our water project in the middle of a pandemic.”

The COVID-19 pandemic has only exacerbated To’Hajiilee’s water crisis. Begay has been working with ABCWUA to help bring tankers of clean freshwater to the community as store shelves were stripped of bottled water in the early days of the pandemic, according to New Mexico In Depth’s Elizabeth Miller.

Given the toll COVID-19 has wrought on the state’s indigenous populations, and the importance of clean, running water in keeping the virus from spreading from person to person, WALH’s actions haven’t sat well with some.

“This is a humanitarian crisis and they’re on the wrong side,” Laura Harris, executive director of Americans for Indian Opportunity, told NM Political Report. “I can’t understand their motive.”

“That’s just racist. They wanted to blame the Navajos that it’s their fault, To’Hajiilee couldn’t get their act together, blah blah blah,” Harris said. “That’s an old dog whistle, racist comments. This really is a case of environmental racism.”

Laurie Weahkee, a self-described friend of To’Hajiilee, said WALH’s actions have been shocking.

“What we’re talking about is 2,000 Navajo people, families, little kids, schools, not having access to water. I feel that WALH is playing games, they’re stalling, making charges like that,” Weahkee said, referencing the casino comments. “They need to know that, as a Navajo woman, I’m offended by that. This community just wants clean water.”

Other groups are now rallying behind the community. Ahtza Chavez, executive director of NAVA Education Project, described the situation as “atrocious.”

“So many times, tribes and tribal communities are asked to give away their right of ways for pennies on the dollar. Yet, when we already have a group who has gotten the permits, gotten the funds, have everything in place to make these improvements to their water system, we have people with their capitalist agenda who are preventing this community from having clean water,” Chavez said. “I think it’s just awful and greedy and atrocious and it needs to be addressed.”

According to email and other correspondence provided to NM Political Report, a second meeting was scheduled for August 28 — once again without input from Begay and with no invitation extended to O’Malley.

“Neither I or anyone from To’Hajiilee was allowed or asked to provide suggestions as to the agenda, nor were we asked who we think should participate in the meeting,” Begay said in a letter dated August 28. “Again, our Commissioner Debbie O’Malley was excluded from this email and invitation. For this reason, I will not be attending next Friday’s meeting. To’Hajiilee is a chapter of the Navajo Nation, a sovereign nation, that should be treated with the respect that we are due.”

Carroll told NM Political Report that WALH hasn’t decided yet if it will provide the easement.

“[The decision] is yet to be made. It’s one of those issues that will come up [in the meetings],” Carroll said.

But O’Malley said the County Commission is still proceeding with condemnation.

“I don’t think we have much of a choice,” she said. “We have to file for condemnation. If they really wanted to do something, they would have done it before.”

“The Navajo Nation has just appropriated another $2 million to this project and that needs to be committed before the end of the year,” she said. “The deadline is December 31st.”