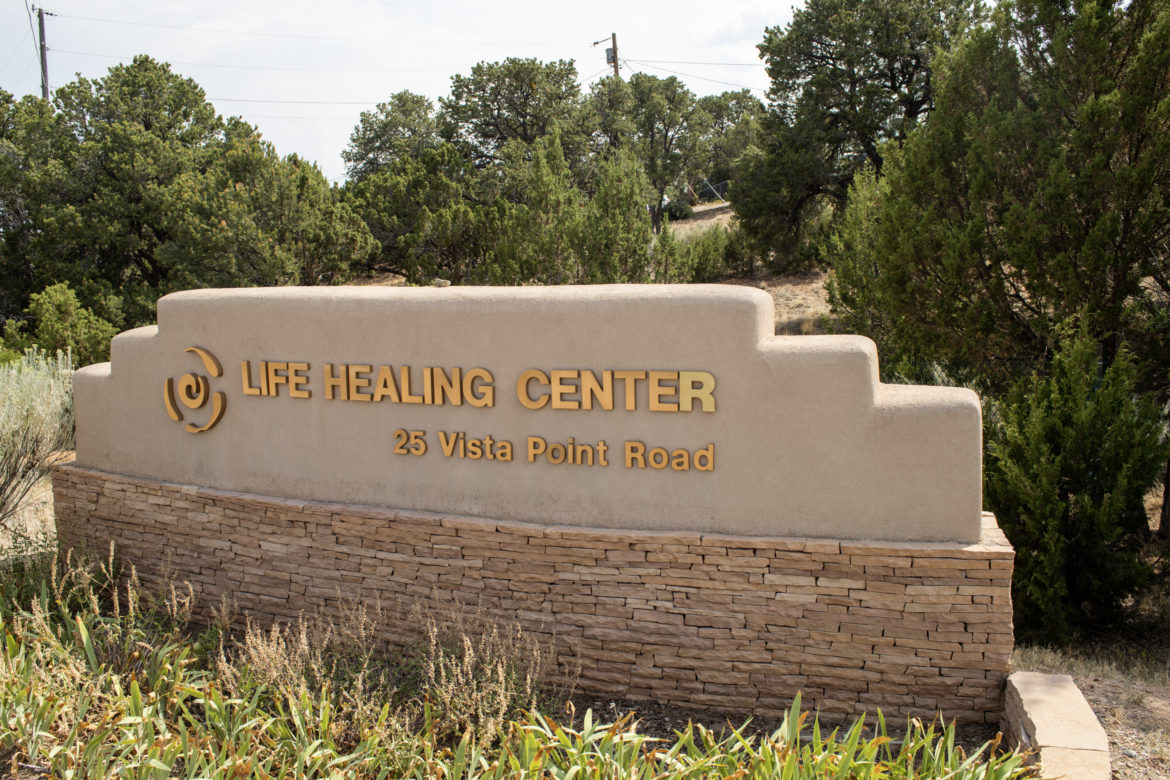 The sign at the entrance of the Life Healing Center, south of Santa Fe.

SANTA FE — It was a Wednesday evening when Emily Everhart spiked a fever, started coughing and developed a sore throat. She was anxious: All three are tell-tale symptoms of COVID-19. And Everhart, a mental health therapist, had good reason to fear she’d been exposed: There recently had been an outbreak of 10 cases at the rehab center where she worked.

Everhart called her supervisor at Life Healing Center in Santa Fe and described her symptoms. She thought she should stay home in quarantine. Instead, her supervisor told her that if her temperature cooled down by morning — which it did — she should show up at work.

A few days later, she tested positive for COVID-19.

“It was egregious,” Everhart said. Not only did she have symptoms, but her supervisor knew she’d been in direct contact with clients who’d tested positive for the virus. “For them to be asking me to come in anyway just seemed really ridiculous.” She resigned over the incident.

Everhart, along with another former employee who declined to be named for fear of jeopardizing their career, described lax safety measures at Life Healing Center, a 46-bed inpatient treatment facility for people with substance use disorder, mental illnesses and trauma. For months, masks were optional, even as COVID-19 cases began to surge across New Mexico, the former employees said. Weeks after the state mandated that employees at all businesses wear masks to prevent spread of the novel coronavirus, Life Healing Center still wasn’t following the rules.

“We kept saying, ‘Why aren’t we following these guidelines?’ And we just kept being told, ‘Because we’re an exception to the rule,’” the other former employee said.

When it comes to COVID-19, many group living facilities around the country have sidestepped guidelines. As a result, the disease has spread quickly through numerous nursing homes, prisons and other settings where people live together in close quarters, killing tens of thousands. Alarmed by the potential for large-scale outbreaks in residential treatment centers, U.S. Sen. Elizabeth Warren (D-Mass.) and two Democratic congresswomen launched a probe last month: They wrote to 10 leading companies in the addiction and behavioral health treatment business, seeking information about what the firms were doing to combat COVID-19.

One of the companies was Acadia Healthcare, the multinational behavioral health behemoth that owns Life Healing Center. Last year, Acadia reported $3.1 billion in revenue; it has nearly 600 treatment centers in the United States and the United Kingdom.

Everhart’s dilemma is common not just in rehabs but in the health care industry as a whole, surveys show. During the pandemic, medical workers have frequently been pressured to go to work even when they’re sick, Kaiser Health News reported. And the issue isn’t unique to the coronavirus: Restrictive or nonexistent sick-leave policies have long put employees in the difficult position of choosing between going to work sick and potentially infecting others or losing a paycheck or a job.

Life Healing Center’s CEO, David Hans, declined a request for an interview. An Acadia spokesperson did not respond to multiple interview requests. In an emailed statement, Hans wrote that his facility followed national and international public health recommendations and that “the safety, health and well-being of our patients and employees are our top priorities.” Employees are required to wear masks, he wrote, and clients are encouraged to do so.

On June 1, Everhart’s first day on the job, about two dozen residents lived in cabins scattered across the campus, which is nestled in the Sangre de Cristo foothills. The state’s coronavirus case count was mounting: at least 7,800 New Mexicans had tested positive, and 362 had died. To slow the spread, the Department of Health (DOH) had issued orders on May 15 directing employees at all businesses to mask up.

But when Everhart showed up to work, she noticed the rule wasn’t being enforced.

“There were very mild recommendations to wear masks, but the culture was that basically no one was,” she said.

Everhart said she raised concerns with managers and was told that mask wearing was just a “general recommendation for the public” and was not a mandate for health-care providers.

The message, according to the other former staffer, was: “If you care to wear one, it is up to you.”

They weren’t the only ones with concerns. The New Mexico Environment Department (NMED), which oversees workplace safety, also received two complaints about the facility.

Months before, on March 25, the state notified Life Healing Center about a complaint with a bevy of allegations: Food was being served communally, and patients were gathering for large group therapy sessions. Clients would “occasionally cry and drip mucus from nose and wipe off with hand without access to adequate disinfectants or hand washing stations,” the NMED wrote.

On June 4, the state notified Life Healing Center that it had received a second complaint, this one about the lack of mask wearing.

In a June 5 letter responding to the second complaint, Hans responded that he was “unaware” that his business had to follow the state guidelines published three weeks prior. He said he would notify employees that they should wear masks “when in close proximity to others.” The state deemed Hans’ responses to both complaints satisfactory.

More staffers began wearing masks in July, said Everhart and the other former employee. But clinicians — who run therapy groups or offer one-on-one treatment — decided not to wear them while conducting some sessions. “It would be really hard to facilitate a two-hour group wearing a mask, in small rooms, and without anybody being able to see our mouths move,” Everhart said.

Eventually, the novel coronavirus found its way into the facility.

On July 20, Life Healing Center staffers were notified that one of the clients had tested positive. The next day, DOH workers came to the facility and tested every employee and all 27 clients, DOH spokesperson David Morgan said. On July 27, the state notified the center of nine additional positive cases. Both clients and staff were among the infected.

Everhart had tested negative. But she decided to get a second test on July 28, when the DOH came to the facility again.

On July 29, while waiting for the results, she developed the fever and cough.

What followed that evening and the next day was a confusion of phone calls, emails and conflicting advice from her employer. Her fever had dropped, so she showed up to work, as her supervisor advised. Once there, a company nurse told her to go home and wait for her COVID-19 test results. Later, the nurse reversed course and said she should actually stay at work, a decision Everhart’s boss affirmed.

“You can report to work with [personal protective equipment],” her supervisor emailed her.

Everhart resigned later that day, offering to stay on for several weeks to finish therapy sessions with her clients.

Her cough and sore throat persisted, but she was expected to go into the office, she said. On August 1, she got the call from the DOH: She’d tested positive.

“I am really upset that I was advised to come in the last few days,” Everhart wrote to Hans and others. “I have no words for how irresponsible it was.”