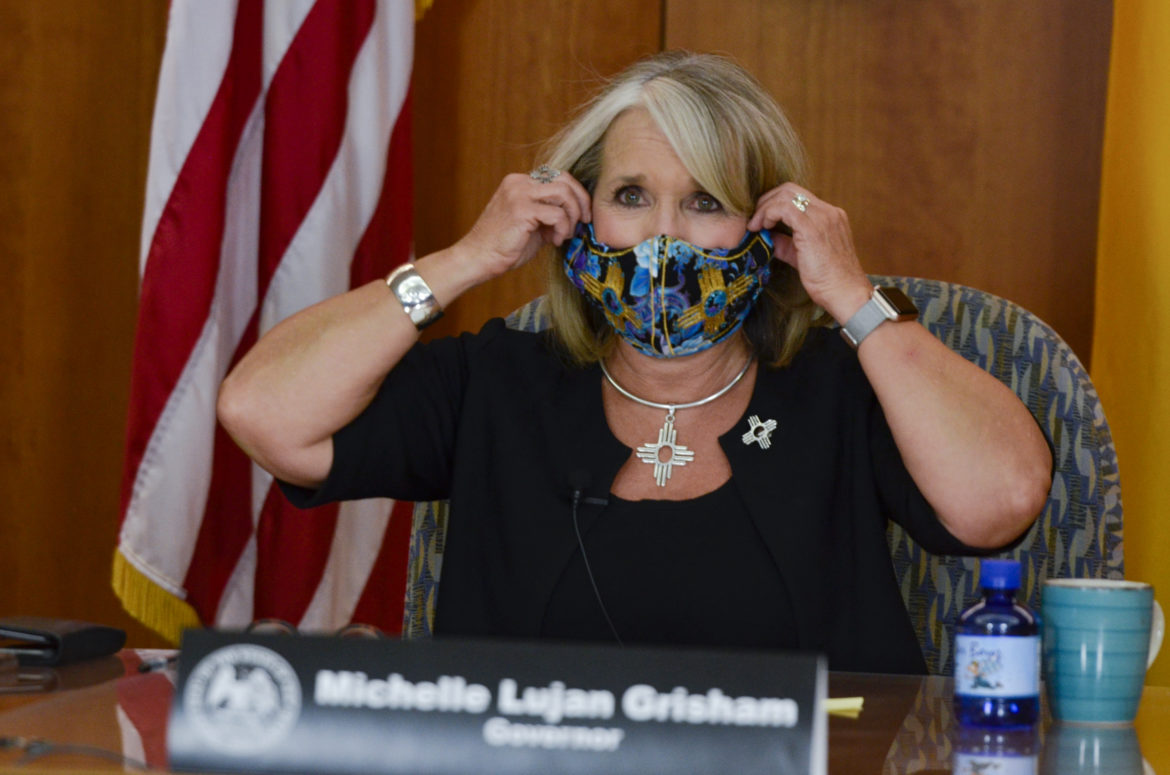 Gov. Michelle Lujan Grisham removes her mask Thursday at the start of a news conference at the Capitol on the state of New Mexico’s COVID-19 response.

While the governor addressed further discussions of further easing restrictions, she said the focus is currently on in-person education and childcare.

“Focus is on education. Number one priority,” Lujan Grisham said. “Because we know if we can do that successfully, we know we can do more business openings.”

But it was because of the continued improvement in numbers that officials can even consider starting a conversation.

“All of our success is really behavior by New Mexico residents,” Lujan Grisham said.

“We don’t get the best numbers we’ve had in 4-6 months unless people are staying at home, they’re wearing their masks, they’re not going to large gatherings and they’re keeping their hands clean,” he said, also mentioning cleaning high-contact surfaces.

The state currently meets all of its gating criteria, except for the total number of tests per day. That, he said, came because of a number of factors, including inclement weather, damage at the Expo New Mexico grounds in Albuquerque, a large testing site, and more.

But, he said the number one driver is “less public interest in getting tested.”

The state has hit new lows in spread rate, keeping the test positivity as the “best in the West” and acknowledged that contact tracing continues to improve.

The contact tracing, which includes getting information from those who have confirmed cases on where they went during the time they were contagious, helps the state know what kind of activities are likely spreading the disease.

Those are mostly large gatherings, travel and indoor spaces without masks, Scrase said.

He also acknowledged the state’s last holdout in having a confirmed case,

De Baca County, which had its first reported case on Thursday and said he was cheering for the county to remain COVID-free as long as possible.

Schools were able to open this week to some in-person learning as part of a hybrid model and Public Education Department Secretary Ryan Stewart said that 50 schools and nearly 3,600 students headed back to school for in-person learning.

“It’s been a long road since March 11 when we initially had to close our school buildings,” Stewart said, and said it was “incredibly exciting” for students, educators and other staff to be able to have some in-person instruction.

He said that PED would continue to help districts and charter schools. This includes visits and coordination with local fire marshals to help districts with personal protective equipment, or PPE, usage and disposal and dispensing advice on social distancing requirements. PED leadership will also travel to districts across the state to support districts.

PED will also work with the state Department of Health for surveillance testing of school staff.

“We want to thank the Department of Health for working with us to make sure that we are able to provide access to those resources out to all of our educators,” Stewart said.

Elizabeth Groginsky, the secretary of the Early Childhood Education and Care Department, said their department also will do what they can to help give support to working parents. She said that 75 percent of licensed early childcare providers are currently open and serving children. This doesn’t mean everything’s alright with all providers.

“Many providers are still facing significant challenges in terms of returning for enrollment and some are still temporarily closed,” Groginksy said.

The department announced earlier this week that it would waive copayments for childcare.

“By waiving parent copayments, we are helping make it easy for families to provide childcare while ensuring the providers continue to receive their revenues,” she said.

The Republican Party of New Mexico criticized the governor.

“Most of our students are falling further behind because they still cannot attend school in person. Teachers are working late into the night to try to adapt to the many changes coming out of the Administration,” RPNM chairman Steve Pearce said in a statement. “Many students, whose parents are struggling to make ends meet, are greatly disadvantaged by the governor’s Order. Some rural students still have no access to computers or the internet.”

When asked about other potential reopenings, like further in-person dining and movie theaters, Lujan Grisham reiterated that the focus is on education.

But the continued improvement also means some conversations will start.

“An opportunity to again review some of the youth sports and training for some of our kiddos around the state,” Lujan Grisham said, while being clear that this didn’t mean changes were imminent.

And other things would likely not happen until a vaccine is ready.

And even safer reopenings wouldn’t happen for a while. Scrase said it takes four to five weeks to fully evaluate changes.

“They are not invitations for New Mexicans to ignore a stay-at-home order,” she said. “We’re under a public health environment that says we should only be going out when necessary.”