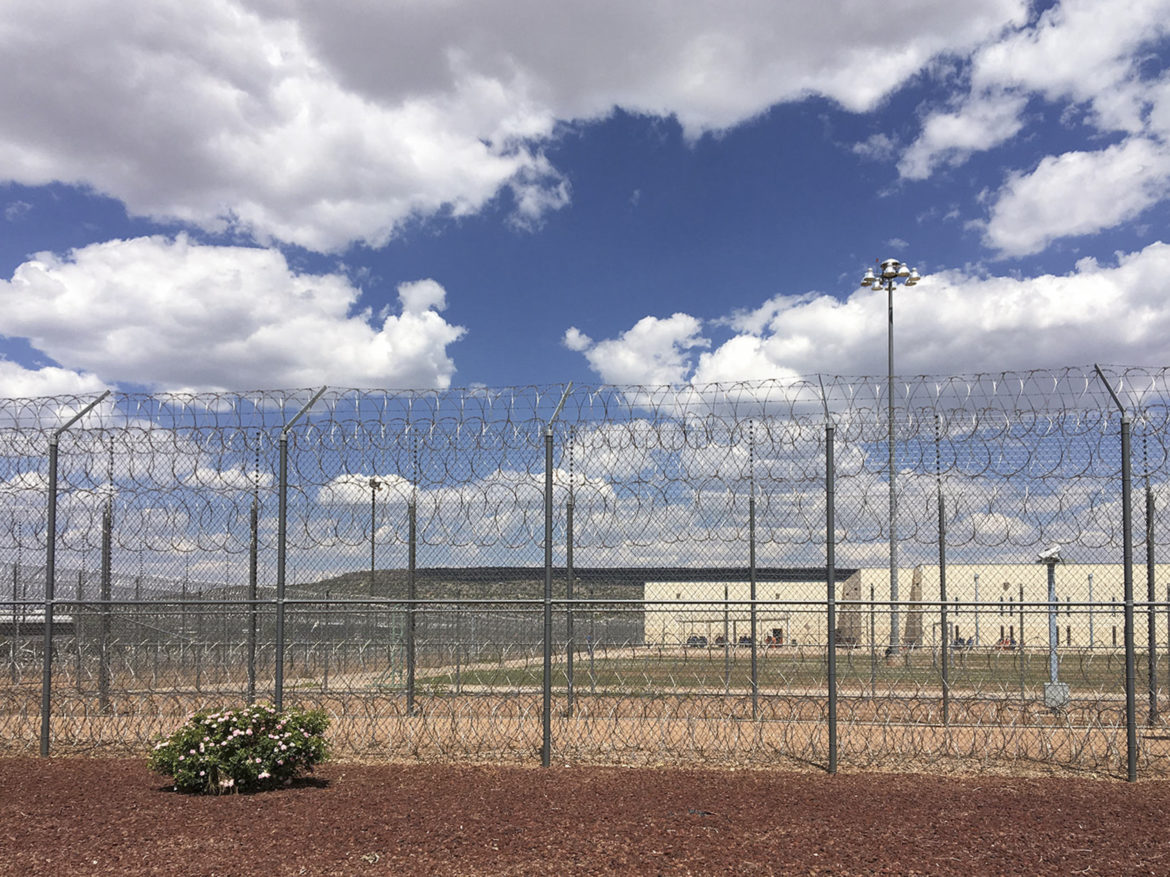 In the first week of July, Freddie Sanchez began to feel a hot and cold tingling sensation in his neck and back. He had been imprisoned at Cibola County Correctional Center for two years and lived in a working pod, a unit of about 40 federal inmates who work in food preparation and other jobs at the prison while awaiting trial or sentencing.

Feeling “sicker than heck,” Sanchez asked a guard about getting a COVID-19 test. He said the guard told him he was probably just withdrawing from drugs. “That’s messed up for someone to even say that,” Sanchez said.

The next week, he noticed that one of the other kitchen workers was having trouble breathing. The inmate, who had asthma, confided that he was afraid to let himself fall asleep at night for fear he might not wake up. A couple of mornings later, Sanchez said, he noticed that the man had disappeared.

By July 20, the entire kitchen staff was too sick to work. And that was when, for the first time since the pandemic erupted in March, the Cibola inmates were tested for the coronavirus.

For months, CoreCivic, the largest private prison corporation in the nation, had assured state and federal authorities it had everything under control. On July 26, it reported just five positive cases among the federal inmates at its Cibola facility, a 1,129-bed prison set in the little village of Milan, just outside of Grants. The following day, the number jumped to 175 — an increase that represented New Mexico’s largest single-day jump of COVID-19 cases.

Among the ill were Sanchez and his cellmate Moises Zepeda, both of whom told Searchlight New Mexico that on July 22 they were sent to a shared cell in the special housing unit known as “the SHU” — typically an area for disciplinary segregation like solitary confinement. They remained there for two weeks, family members said. Zepeda said that their stay in the SHU began after he flipped off a guard.

In separate interviews with these detainees and two other men, an account emerged of an official response from CoreCivic that was both punitive and ineffective at preventing the spread of infection. A prison telephone, occasionally wheeled over to Zepeda and Sanchez’s cell in the SHU, was their only access to the outside world. That was how they learned, in calls to their attorneys, that they had both tested positive for COVID-19.

Basic requests for things like Tylenol went unanswered, they said. A guard they knew only as “Officer Pine” took hours to bring them the toilet paper they requested. It wasn’t until their 12th day in the SHU, they said, that they received a towel for the shower.

CoreCivic has denied these allegations. “Detainees with symptoms of COVID-19 were housed in a medical overflow unit, NOT restrictive housing,” said spokesperson Amanda Gilchrist in a written statement to Searchlight.

She dismissed reports of denied medical care as “patently false.” Though she confirmed that the prison population wasn’t tested for COVID-19 until July 20, she described the testing effort as preventative. “Most of the staff and detainee cases that have tested positive … were asymptomatic at the time of testing,” Gilchrist said.

As of Sept. 8, the number of COVID-19 cases at Cibola officially reached 324 — a figure that includes people who have recovered from the disease and accounts for more than 80 percent of cases in the entire county. The cases are concentrated among inmates detained by the U.S. Marshals Service (USMS), which has 492 beds at the prison.

In a statement, USMS spokesperson Lynzey Donahue reiterated CoreCivic’s claim that nearly all inmates were asymptomatic. “All recovered within 14 days,” she added.

An additional 44 staff members have also tested positive, according to CoreCivic. The outbreak has sparked concern in and around rural Cibola County, where state lawmakers say it could strain the local hospital’s limited resources.

A New Mexico congressional delegation, made up of Senators Tom Udall and Martin Heinrich and Representatives Deb Haaland, Ben Ray Luján and Xochitl Torres Small, expressed numerous concerns about the prison’s handling of COVID-19 in an inquiry on Aug. 14.

CoreCivic took troublingly long to realize that it had “a massive outbreak in its facility endangering the safety of inmates, detainees, staff and the community,” the delegation wrote in a letter to U.S. Immigration and Customs Enforcement (ICE), the USMS and CoreCivic CEO Damon T. Hininger. The letter noted that the state Department of Health had to direct CoreCivic to conduct mass testing, a point of concern. The delegation was also concerned that “correctional officers working at the Cibola facility are not wearing adequate PPE when escorting COVID-19 positive inmates into the local hospital,” the letter said.

A spokesman for Heinrich said the delegation has still not received a response from CoreCivic or any government agency.

CoreCivic reported more than $1.9 billion in revenue in 2019, about half of it derived from federal contracts with ICE, the USMS and the Bureau of Prisons. But despite its ample resources, advocates and prisoners alike say the company has neglected to take basic precautions to prevent COVID-19.

People incarcerated in at least three CoreCivic prisons, including the facility in Cibola, have staged protests over conditions since the pandemic began. Several guards have filed lawsuits against the company, alleging unsafe working conditions at an ICE detention center in California. And a federal class-action suit charges that CoreCivic detainees in Arizona were denied medical care and the most basic safeguards.

In Cibola County, where 29 percent of residents live below the poverty line, CoreCivic reportedly has collected $150 million from the county in exchange for operating the prison since 2016. Even before COVID, the prison had a reputation for dismal medical care. “The Cibola facility has long been known to be one of the most problem-prone prisons in the nation,” the U.S. Department of Homeland Security wrote in a December 2016 report.

Locked down too long

Within days of the July 20 testing, the whole prison went into a strict lockdown. Two other inmates who spoke to Searchlight said they were allowed to leave their cells, in an area known as Pod 700C, for 20 minutes every other day, leaving them only enough time for either a shower or a phone call. Like Sanchez and Zepeda, the two said they didn’t get medical attention for two weeks. Their meals consisted of oatmeal for breakfast and sandwiches for lunch and dinner.

Tensions boiled over on Aug. 5, when inmates anticipated the lockdown would end. Instead, they were told it had been extended. That was when, according to both prison authorities and inmates, the prisoners staged a protest and refused to go back into their cells.

The two inmates in 700C said they witnessed guards use some sort of non-lethal guns to quell the protest and that they shot at one man’s head dozens of times, requiring him to receive staples to stitch up his head wounds.

Gilchrist denied that this occurred.

“Facility staff successfully restored order, with no serious injuries occurring as a result of this incident to detainees or staff,” she said. “One detainee was sent to an outside hospital the following day for treatment and returned to the facility.”

The inmate with asthma, the one who disappeared without explanation, turned out to have a severe case of COVID-19. He was transported to Presbyterian Rust Medical Center in Rio Rancho with a collapsed lung and was placed on a ventilator, according to his daughter Jamie Rodriguez, a nurse in California.

Rodriguez said she asked the USMS to let her visit her father, Todd Prue, in the hospital’s I.C.U. She even flew to New Mexico so she could be available on the spot. According to one email, the USMS told her that his charge nurse had recommended a Zoom-like call, but it had to be coordinated between the prison and the hospital. That never happened, Rodriguez said.

“He wasn’t always an inmate. He was my father, and I just would like to be able to be there and say goodbye in a proper way,” she said.

On August 13, Rodriguez received an email that her father’s condition had improved. He was returned to the prison and kept in the medical wing, where she finally reached him by phone. He told her he had complained about his symptoms for two weeks, and that he was accused of being on illicit drugs — and drug-tested twice — before his hospitalization. Several days had passed since he was discharged, but he hadn’t yet tested negative for the disease, she said.

Because he was brought back to prison before being confirmed negative, she worried that the disease would continue to spread throughout the facility.

“I’m very concerned that my clients are just in a container being moved around with a virus,” Hotchkiss said. The staff just “shuffles guys around — that’s all they do, it seems.” And that means COVID-19 can keep recirculating, today and for the foreseeable future, he said. “I’m not sure how they are going to get this out of that facility.”

Amy Martyn is a freelance journalist specializing in consumer news, healthcare, criminal justice and labor. Her bylines can also be seen in The Intercept, Gen, Vice and other publications.