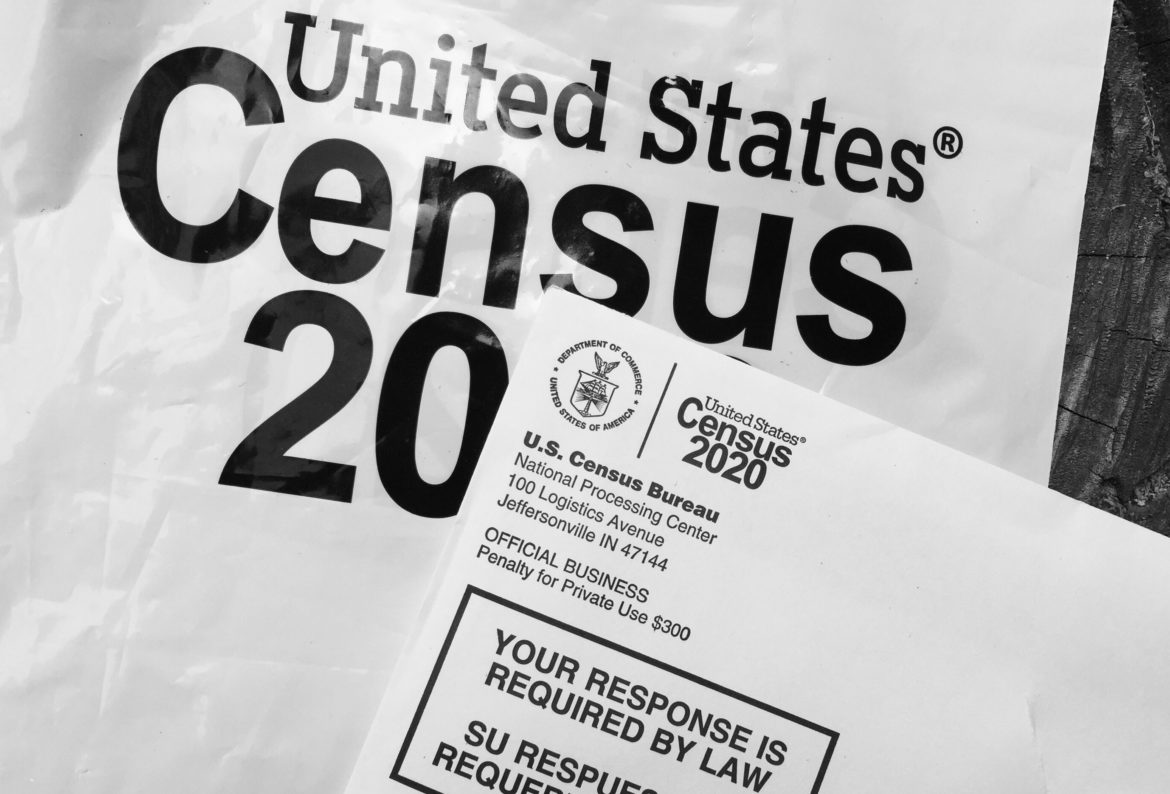 Census packets in plastic bags are geo-coded to specific addresses and left at doors in rural areas. Like this one.

With three weeks to go before the US Census is scheduled to end, 19 percent of Navajo people have responded to the U.S. Census, a much lower rate than for New Mexico and the U.S. overall, and lags behind all other tribes located within the state other than Jicarilla Apache.

The once-a-decade head count of the U.S. population helps determine federal funding for healthcare, housing, roads, and a range of other important services and robust responses by tribal members ensure that their communities receive an equitable share of federal resources.

This story was first published by New Mexico In Depth and is republished here with permission.

But the census deadline looms ominously following the Trump administration’s decision in early August to abruptly move it from the end of October to September 30. Earlier this month the Navajo Nation and the Gila River Indian Community joined a lawsuit filed last month by several nonprofits, including the National Urban League and the League of Women Voters, as well as cities and counties in a number of states, to keep the census deadline at the end of October.

There is no guarantee the court fight will end in an extended deadline, however.

Over the past month, the Navajo Nation, which is one of the largest tribes in the U.S. and dwarfs other tribes in New Mexico by size, has nudged upward the number of people who have responded to the census, with responses rising from 10 percent in late July to 19 percent  this week. But that’s significantly lower than its 53.6 percent goal, presented on the New Mexico Indian Affairs Department website.

The expedited census deadline comes as the Nation is still recovering from the pandemic, after months of curfews and lockdowns during which census workers weren’t able to canvas rural and often remote Navajo communities. Due to COVID-19, long-standing plans for census workers to drop off census packets at the doors on tribal land and other hard-to-count rural areas didn’t get underway until June. Partial weekend curfews in Navajo communities continue, and the message to tribal members is to continue to physically distance from others as much as possible.

“Completing the census is already very challenging for many households due to the lack of telecommunications infrastructure in many Navajo communities,” Navajo Nation President Jonathan Nez said in a statement last week. “Shortening the census timeframe only adds to the challenges and makes it a lot more difficult, especially for our elder population and those who live in remote areas.”

All of New Mexico’s tribes have scrambled since June to catch-up on ambitious plans to count tribal members.

Over the summer organizations participated in a media blitz across all platforms, including radio and digital billboards operated by tribes, to get the word out about the census count. A coloring book with designs from local New Mexico artists was printed. Phone banks operated as a means to avoid direct contact and some tribal leaders offered incentives such as gift cards to boost return rates.

While most tribal communities remain below their census goals, and all remain below the national response rate of 65 percent, several tribes have made significant progress in the short window.

But Little worries shortening the census deadline to the end of September will hamper most tribes from meeting their census count goals. “It put us at a disadvantage. I am really concerned about an undercount,” she said. “Many have expressed the same concerns we have.”

In New Mexico, 90 percent of Native American students attend Title 1 public schools, a program geared to assist low-income students, according to the NM Native Census Coalition. Census responses help determine how much federal money flows to those schools. The count also factors large in how much money flows to housing programs, such as the Section 8, Indian Community Development Block Grants and the Indian Housing Block Grant that supports new or reconstruction of homes on tribal lands. And health programs determine operational plans, the largest serving 2.2 million Native Americans through the Indian Health Services, based on census data.

The lawsuit challenging the September 30 deadline won its first victory this weekend, as a federal judge in California granted a temporary restraining order to stop the Census Bureau from halting any field operations. A judge will hear the case on September 17 to determine if the deadline should be extended to October 31.

“Many of our existing programs rely on federal funding, which is based on census data. Once again, the first people of this country are having to fight for what is right and just,” Nez said.

For New Mexico tribes, the extension would support the momentum they have going into the final days of the census count.

In total, of the 22 tribes being tracked by the state Indian Affairs Department, four have surpassed their 2020 goals — Jemez, Santo Domingo, Zia and Cochiti — and another five are nearing them. The Jicarilla Apache tribe, which locked down during part of July as it battled a surge in COVID-19, has the lowest response rate, at 14 percent.

Due to public health concerns, Jicarilla was one of at least 30 tribal nations across the country to not allow census workers to conduct door-to-door efforts.

“Sovereignty played a large part in any of our decisions,” Little said about the tribal government’s decision. “They wanted to protect the health and safety of their citizens, we worked with them the entire time with that in mind.”

In most tribal communities census workers are making phone calls and going door-to-door following up with people they’ve targeted for not filling out their form. They may also check in with people, particularly in rural and hard to reach areas, who already filled their form out to ensure an accurate home location.

People can still fill out their Census form online or by calling 844-330-2020. Anyone who received a questionnaire on their door can also submit it by mail.