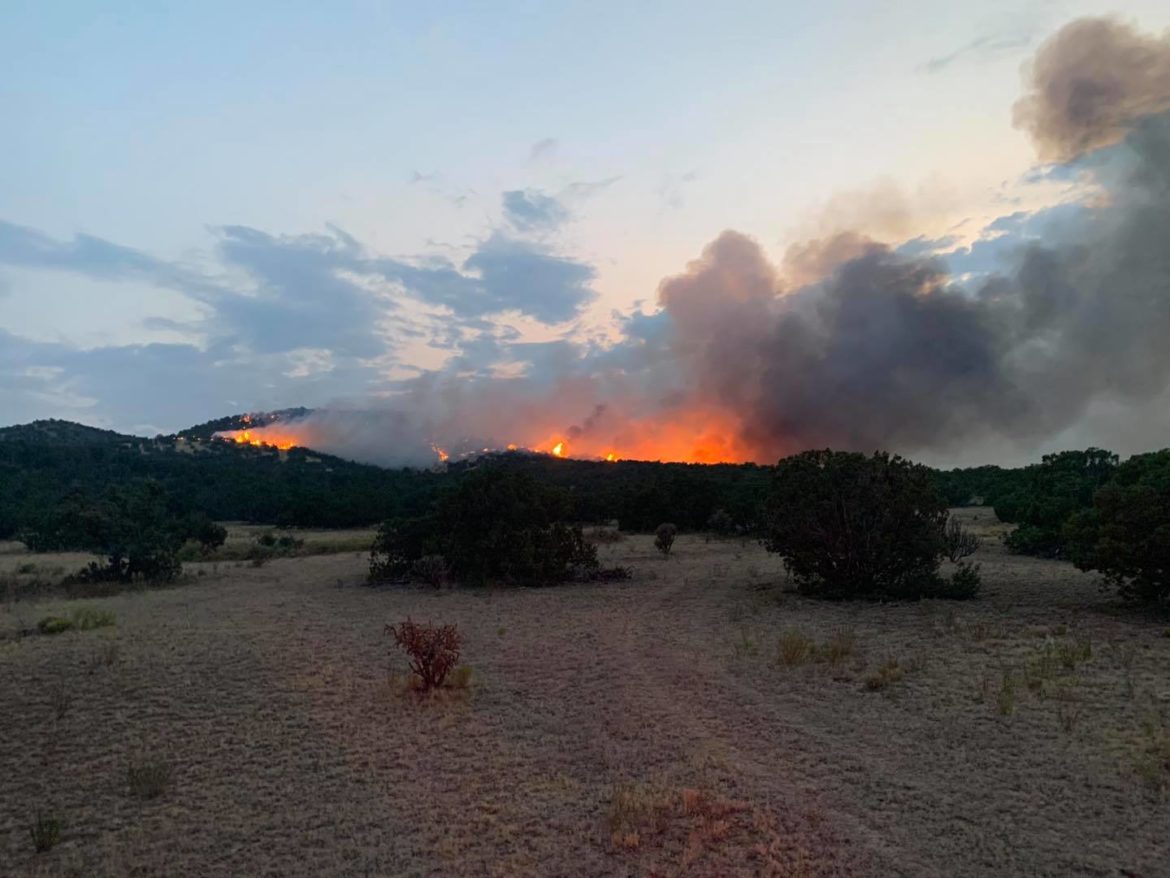 An image of the Caja del Rio Fire taken August 23.

On a dry and dusty afternoon in August, a white hot bolt of lightning zipped down from a thunderhead to the parched land below, sparking the dry grass of the Caja del Rio plateau. A few hours later, acres of land on the plateau were aflame and thick black smoke was billowing up from the landscape as the wildfire grew.

At the time, the Forest Service was already battling the Medio Fire, a larger wildfire burning northwest of Santa Fe in the Santa Fe National Forest. Early reports based on aerial surveillance estimated the Caja del Rio fire had burned 600 acres of land, but the Forest Service later revised the fire’s footprint down to 158 acres.

One week later, the Caja del Rio fire was considered contained, while the Medio Fire still raged some 30 miles north. It would take another three weeks before that fire was fully contained.

The Medio Fire, which burned some 4,000 acres, returned attention to the impacts of climate change on New Mexico’s landscape, and the role of wildfire in forest management.

But Garrett Veneklasen, Northern Conservation Director at the New Mexico Wilderness Alliance, was somewhat interested to see parts of the Caja burning.

“Fire on that landscape is a really, really rare occurrence, because the vegetation type does not lend itself to wildfire,” Veneklasen told NM Political Report, referring to the piñon-juniper forest that blankets the landscape.

“Fire is scary, and the smoke is not good, but what I think we’re going to see in the end is some really positive regenerative impacts,” he said.

The Caja del Rio plateau is an 84,000 acre expanse of land in the Española Ranger District of the Santa Fe National Forest. The plateau itself is northwest of the Santa Fe Airport and northeast of Cochiti Lake. Lined with basalt canyon walls and cliffs, the area was used for grazing livestock for centuries before the U.S. Forest Service took possession of it in the early 20th Century.

“It’s all an old volcanic area related to the Valles Caldera,” said Deirdre Munroe, the New Mexico state Trails Advocate for the American Endurance Ride Conference and a longtime recreational user of the area. “The Caja has a variety of landscapes and habitats, from a fairly grassland to piñon-juniper forests, some areas are flat, some are mesa tops.”

The land has a rich cultural history that makes it incredibly unique, Veneklasen said.

“That place is probably the most culturally dynamic landscape in the entire west,” Veneklassen said. “The Camino Real ran through there, Route 66 and Highway 1 ran through there; there’s thousands of petroglyphs and sacred sites, and then you’ve got 33 miles of really wild and rugged Rio Grande country on the west side, and that beautiful Santa Fe River Canyon that’s wild and beautiful [on the east side].”

Decades of overgrazing in the 19th century enabled the pinons and junipers to creep across the landscape, and the area hasn’t seen many fires in recent memory. The last fire was in 2012, in nearly the same area as this year’s fire burned.

“That was extinguished, like this one, fairly quickly,” Munroe said.

Veneklasen thinks the fire seen this year could help bring back some balance to the area.

“Pre-colonization, that entire plateau was a grassland, with wet meadows and an interesting grassland dynamic,” Veneklasen said. “These landscapes did a really great job of managing themselves. I think it’s really good that we try to figure out how to regenerate these landscapes and get to a place where we can have periodic, low-intensity fires, because that’s what the system is designed to do.”

“Fire is like a natural ecosystem manager,” he added.

‘Room to work’ with the fire

Forest service officials believe the Caja Del Rio fire was started by lightning. Historic weather data for the area shows a patch of afternoon clouds on the day the fire is believed to have ignited, coupled with thunderstorms recorded at nearby Cochiti Lake later in the day.

While early reports of the fire overestimated its size, Sandy Hurlocker, District Ranger at the Española District at the Santa Fe National Forest, said the fire initially moved fast across the landscape.

“The fire started on an afternoon and burned dozens and dozens of acres, and eventually got to 168 acres. It had to burn pretty fast,” Hurlocker told NM Political Report.

Between the Medio Fire burning to the north, and crews on loan to other states to help battle some of the other wildfires ravaging the West, the Forest Service was able to contain the Caja del Rio fire with a crew of about 30 personnel.

Hurlocker said the location of the Caja del Rio fire, in a relatively remote area, posed relatively few threats to the surrounding communities.

“We have room to work in the Caja without imminent danger to houses or watersheds that provide drinking water,” Hurlocker said. “This year, with COVID, really our direction is to suppress fires wherever they are. This particular area is not too far away from Cochiti Pueblo, and on the east side, there is a transmission line going across and over the river to Los Alamos. Those would be the values at risk.”

“There’s also unknown sites out there that pueblos from all over have uses out there, so whenever we do get a fire out there, we need to think about that,” he added.

Veneklasen said he’s eager to see how the landscape will respond to the burn.

“When it’s all said and done, I think that fire will have a remarkable regenerative impact. It [fire] just puts all the nutrients back into and onto the soil,” he said. So I suspect even next spring, we’re going to see remarkable grass and forage and wildflowers come in behind where that fire is and was.”

Loving a landscape to death

The New Mexico Wilderness Alliance is hoping to get some of the land in the Caja del Rio designated as “Wild and Scenic.” Veneklasen said he’s part of a “loose coalition” of tribes, grazing permittees, conservationists and recreational users who are interested in preserving the history, cultural sites and natural beauty of the area.

“This loose coalition is talking about the long-term management plans for that very special landscape. No decisions have been made, it’s all just discussions right now,” Veneklasen said. “It needs to be inclusive, there needs to be public meetings, and people need to have their say. But there could be a couple small 5,000 acre tracts of wilderness [designation] out there.”

“It’s all about management. We have a situation right now where folks are really working well together,” Munroe said, pointing to grazers and traditional land users, as well as recreational users and conservation advocates. “I think this area is a poster child for beneficial collaboration of all the users in a way that benefits the landscape and the national forest and New Mexico’s economy.”

As public lands across New Mexico and the West are bearing the brunt of increased recreational use, Veneklasen noted that the COVID-19 pandemic has highlighted the need for a long-term land stewardship plan for the area.

“It’s so easy to love a landscape to death,” he said. “We need to really consider how we respectfully steward that really, unique landscape. It is as remarkable as any landscape in the West, in terms of its wildlife and cultural values.”