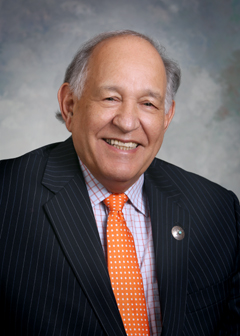 Trujillo already opted not to run for reelection in House District 45.

Democrat Linda Serrato faces Libertarian Helen Milenski in the district that has historically been a safe Democratic seat.

The House Democrats said he “resigned in order to spend more time with family and care for his health.”

Trujillo chaired the House Taxation and Revenue Committee in 2017 and afterward was the committee’s co-chair.

The Santa Fe County Commission will get to choose the person to replace Trujillo for the remainder of the term, which ends in January.

Trujillo has served in the state House since 2003, when he was appointed by then-Gov. Bill Richardson. Trujillo replaced Patsy Trujillo, who is not related to Jim, after she left to join the Richardson administration.

Speaker of the House Brian Egolf, another Democrat from Santa Fe, praised Trujillo on Monday.

“Jim valued action over talk and always insisted that his colleagues remember constituents who needed the most help,” Egolf said in a statement. “It was because of Jim’s tenacity and focus that we were able to achieve passage of 2019’s House Bill 6, which achieved Jim’s overarching goals in tax policy: lower taxes for working families and greater fairness for all. As Speaker, I am indebted to the contributions Jim has made to our House and will greatly miss his knowledge, heart, and courage when representing the people of New Mexico.”

Trujillo has had health problems in the past. In 2017, Trujillo missed most of that year’s legislative session while recovering from an aortic aneurysm.