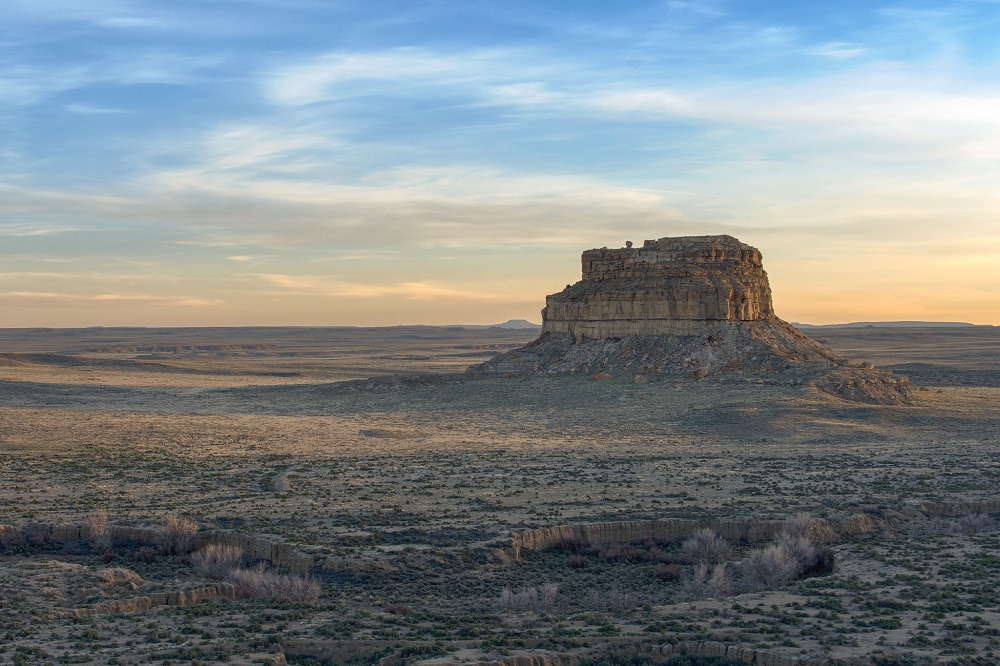 Tribal governments are working with archaeologists to identify thousands of culturally-sensitive sites and resources in the Greater Chaco region, in hopes of preventing oil and gas development in the area from encroaching further onto the sacred landscape.

Last year, Congress passed a bill granting a one-year moratorium on oil and gas leasing within 10 miles of the Chaco Culture Historical National Park. That moratorium expires later this week on September 30.

Meanwhile, the deadline for public comments on a proposal that could see as many as 3,000 new oil and gas leases sold in the Greater Chaco landscape passed September 25. The deadline took place amid repeated calls made by tribal governments and members of the New Mexico congressional delegation for the U.S. Bureau of Land Management to halt the proceedings until after the COVID-19 pandemic had ended and the virus is contained.

Acoma Pueblo Governor Brian Vallo expressed disappointment that BLM and the U.S. Bureau of Indian Affairs, which is also involved in the proposal, did not further delay the public comment period.

“We are very discouraged by the fact that these deadlines have remained in place, even while we have made numerous attempts, and have voiced even through our congressional delegations, the need to pause some of these activities as a result of the public health crisis,” Vallo said during a webinar about oil and gas development in the Greater Chaco region.

But Vallo added that he’s hopeful BLM and BIA will offer up more opportunities for tribal consultation on the proposal moving forward. Vallo said that, despite the pandemic and its impacts on tribal communities in the state, there was a great response from the pueblos and other indigenous nations who submitted comments expressing their concerns.

“What we hope to see, as a result of the submittal of additional statements to the agencies, is that there will be an opportunity to have additional consultation on the pending issues because there are many that are still left unresolved, and many issues that have not been afforded the time for meaningful discussion between the tribal representatives, experts and the federal trustees,” Vallo said. “We’re hopeful that there will be more opportunities to have those discussions and we will continue to advocate for that.”

Separately, several pueblos are working on archaeological and ethnographic studies to identify the thousands of culturally sensitive sites throughout the area. Acoma Pueblo participated in a pilot cultural resources study with Archaeology Southwest, a nonprofit group that hosted the webinar Monday. The group is planning a second study with the Zuni Pueblo.

Octavius Seowtewa, Zuni Elder and Cultural Specialist, said these indigenous-led cultural resource studies are crucial to better understanding the history and present-day importance of Chaco Canyon and the Greater Chaco Region to the puebloan communities.

“A lot of information that is out there was put out by different archaeologists, with their assumptions of what they found and with their own information,” Seowtewa said. “There’s a lot of books, a lot of literature out there that talks about Chaco Canyon, but we’ve never had an opportunity to put in our information.”

Seowtewa said elders were once strict about keeping information about pueblo connections to the landscape secret. But there’s a growing sense that that strategy has left pueblo voices out of decision making processes around Chaco.

“We’re changing that, we want information out there,” he said. “We have information coming from all the pueblo communities about Chaco, why we were there. This place was created as a hub of our people getting together and teaching information about the pueblo people, the community lifespan, the sharing of religious activities, the cultural side of who the pueblo people are, was all acquired and shared within Chaco.”

Paul Reed, Preservation Archaeologist and Chaco Scholar at Archaeology Southwest, emphasized the importance of shifting perspectives on Chaco Canyon and the region away from settler-centric archaeology.

“Too many times in the non-indigenous world, we talk about Chaco as some kind of mysterious civilization. Chaco is an amazing place, certainly, but Chaco is the ancestral home of all the pueblo villages,” Reed said. “We absolutely have been missing the pueblo voices. I hope we can continue to have archaeologists like me step out of the way, and elevate the voices of the people whose ancestors created Chaco.”

Vallo said the study will help correct the historic record about Chaco, its history and its relevance to today.

“The narrative is not ours,” Vallo said. “The narrative was developed by numerous archaeologists and anthropologists and federal agencies, who have created these narratives without any involvement or invitation to those of us who are descendants of these places.”

Chaco Canyon was built and settled by ancestors of the broader pueblo community, Vallo said, “for a very important reason.”

“It was a place pre-determined at the time of emergence, that those ancestors would arrive on this landscape to continue preparing for their continued migration to places like [Acoma], where they would settle for eternity,” Vallo said. “The connections to places like Chaco Canyon and Mesa Verde, and other places within the Four Corners region of the country, and even beyond those ancestral homelands, are critical to the continuance of Acoma culture, critical to the continuance of pueblo culture in New Mexico.”

“Chaco is a puebloan past, puebloan history, puebloan lifespan. And any information that would be coming out and benefit the Chaco for protection should come from the source community, which is all the puebloan people,” Seowtewa said. “We all have our own specific names, but that does not take away the importance of this place within the pueblo community. Different places of origin are different within communities. But it’s amazing that we all have the same concept, the same thoughts of our people being told and informed of this place called [Chaco].”

Seowtewa added that some ceremonies practiced today at Zuni Pueblo originated at Chaco.

“And that information has never been put out,” he said.

Archaeology Southwest has partnered with both Acoma Pueblo and Zuni Pueblo for studies to identify traditional cultural properties (TCPs) within the 10 mile buffer zone around Chaco Canyon and elsewhere in the Greater Chaco landscape.

Separately, the pueblos are also pursuing an ethnographic study of the Greater Chaco region with the U.S. Department of Interior (DOI). U.S. Rep. Deb Haaland, who is a member of Laguna Pueblo, said during the webinar that DOI has not yet released the funding for the ethnographic study to the tribes, despite the fact that the money was allocated for fiscal year 2020, which ends September 30.

“This funding should have been awarded already, but as of today it has not,” Haaland said.

The results of those studies could give tribes leverage in the future to participate more fully in land use decision-making at the federal level moving forward. Both the National Environmental Policy Act (NEPA) and the National Historic Preservation Act (NHPA) require tribal consultation during decision-making processes on activities on or near TCPs, Reed said.

“We’re going to learn a lot more about this amazing landscape in the years to come and we need the agencies to protect it and not allow the oil and gas to encroach on this area before we understand it,” Reed said. He added that there are thousands of sites in the area that merit further study and protection.

“We have a lot of understanding of the archaeology. We don’t, as other speakers have noted, have a great understanding of pueblo connections to the land so we’re hoping to fill in some of that.”

“It’s so critical in this time, especially with the ongoing initiatives to further develop oil and gas in this area, that we create this narrative, that we produce the information that is so vital to federal processes,” he said. “Our record, our voice needs to be written, it needs to be documented and needs to be utilized as a source of information as federal agencies and others consider development in this area.”